I have updated a new, 2015 list of Northern Ohio Game Stores.

Go to the new entry!

This previous entry and its replies seem to have disappeared from my blog. Here's a repost: 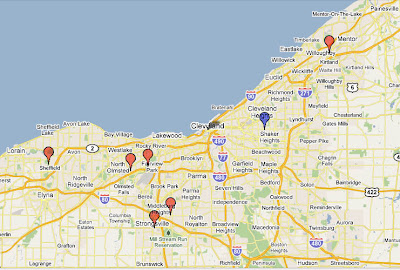 In my last entry, I complained about the lack of game stores in my part of town. Really, they are mostly concentrated in one area. As a long time gamer, I've seen stores come and go in the Cleveland and Akron (and beyond) areas. As with everything, I'm pretty opinionated on what I like in a game store. So what follows is my review of them on my own terms of what matters in a game store.

Disclaimer: I am writing this from the point of view of someone interested primarily in miniatures games.

There are several things I look for in a game store (besides proximity.)

One is Availability of Product. This doesn't necessarily mean it must be in stock. I'm willing to wait a week or two for the store owner to place a special order for me, and I've always been willing to pay in advance, unless they've given me reason not to. Stores that fail in this respect are just encouraging their customers to shop online, in my opinion.

Another is Environment. This includes organization, cleanliness, available gaming space, and whether or not the place stinks like a locker room located next to a landfill.

Honestly, I started to type a few more things, but when I cut down to the bone, these are the two most important factors. So I'm not going to bother with the rest. Sell me the products I want to buy (and if you're really good, sell me something else!) and make sure your store isn't so repulsive that I have an aversion to entering. Sounds simple, right?

So in Cleveland, on the map above we have a number of stores plus a couple semi-related stores that I will also address at the end.


Comic Heaven. This is the lone east side store. In truth, I haven't been there in years. It's a fairly clean & organized store. Nothing glamorous, but functional. They have one table, but I've never seen it in use. Most of the time, I've seen it buried in boxes. They are half comic store, half game store. They've got what seems to be a decent selection of board games, RPG games, and GW stock. They seem to carry some of the non-GW brands from what I remember. I've been in there asking if they had certain games/products, and if they did not I was never offered a special order to come back and pick up later. The staff has seemed friendly, thoguh. Seems like a passable store. But nothing special dragging me out there beyond the fact that my parents live nearby (and I grew up in the area), so it's occasionally convenient to stop in.


Recess Games. There are three locations. Until recently, a lot of my WFB gaming was done at Recess Games at Great Northern Mall. Honestly, it was one of the best run stores I've been in. It was clean, well organized, the owner and staff have usually been friendly, and if they didn't have something in stock (even if its a line they didn't carry, and even if it was a small order) they would get it for me. Some pre-orders were also available at a significant discount, and anyone who had their card (spend a certain amount & you get the card) got a regular 10% discount. Until recently, they also had a number of gaming tables where groups would meet for gaming on different assigned evenings. But the tables have disappeared, and the focus seems to be moving to board/family games and early childhood toys.


Warzone Matrix. Our WFB gaming has moved to Warzone Matrix. Over the years the store has been through several names, and I believe several owners. It's the closest thing to being centrally located, is easy to get to (right off the highway) and I believe is the only store actually within the city of Cleveland. Unfortunately it's on the border area of a bit of a questionable neighborhood, and the jokes about making sure you park your car in a well lit area aren't entirely jokes. The store is packed with products, including some out of production and hard to find stuff. They've also got a lot of new/current items as well. One of the biggest draws seems to be the gaming space. They have a couple of separate rooms for RPG games (and I assume card games?), and in addition to the existing tables for miniatures games, it seems that they are expanding and adding a few more tables. But there are a few downsides. I've never tried ordering anything from them, but I have noticed some price increases. OOP products have been marked up to reflect pricing of new products (so, for example, you may find a pack of figures that wasn't sold for more than $8 when it was originally available, but now the price is scratched off and its marked up to $16) and when I've bought both GW and Vallejo paints the last couple times I've been there, I've been charged $5 per bottle. Although they've got a lot of stock and gaming tables, the place isn't exactly pleasant. It's partially a maze and very overcrowded. Finding stuff is difficult -- though each time I'm there I notice something I've never spotted before. Gaming there is somewhat determined by the weather outside. In the winter, it's cold. Everyone dresses in layers and leaves their coats on to play. In summer it's stuffy and smelly. It does seem like there is a bit of a reorganization going on as the store expands into the adjacent space, so hopefully conditions improve.


Gamers Haven. This store moved to its current location a couple years ago, from a storefront that was somewhere around 2-3 times its current size. The old location was large, roomy, well organized and clean, and had plenty of gaming tables. The stock was OK. Good for GW games, and it looked like they had a decent selection of RPG, board and card games, though maybe not as large as I've seen at some other stores. The new store is still pretty clean and organized, and still has a couple gaming tables. Be warned, though, that customers are not allowed to use the bathroom. So if you plan on playing a game there... you have been warned. Anytime I've emailed them about events listed on their web page, I've never received an answer. Every time I've tried to order something not in stock, it's either never come in (even when I've been told "come back next week" and then drove across town based on that) or I've just been flat out told that I should buy something that they already have in the store. I've been told similar stories by friends, including one who previously spent a lot of money there but was yelled at by the owner for not buying anything when he stopped in and they didn't have anything he was looking for. Last I heard, my friend had stopped going there altogether.


CtrlAltElite. I've only recently found out about this store. It's a bit too far for me to easilly get to, but I will stop by as soon as I can. From the photos on their Facebook and Web page, it looks like a nice place to play games, though the stock seems to be limited to mostly cards and GW products. I'll add more comments as I get more information.


A couple more comments about other related locations in Cleveland...


Alter Reality. I have never been to this store. As I understand it, they carry mostly RPG and card games. Not my cup o' tea, so I haven't been there.

Hobbytown USA, Mentor. There is a Hobbytown USA in the strip Mall outside Mentor Mall. It's a large hobby store, mostly full of plastic models, RC cars, planes, etc. and some train stuff. Last time I stopped in, they did have a very small selection of GW items. They're also useful for some terrain & basing products, like Woodland Scenics. This is out on the far east side, about 15-20 minutes past Comic Heaven.

Wings. As far as I know, Wings doesn't have their own web page. The link goes to the Google info page for them. Wings is also another hobby store, geared towards plastic models, trains, etc. Once again, it's useful mainly just for hobby supplies. I buy polystyrene sheet and glue here, but that's about it.


Have I missed anyone? That's what I know of within about 50 miles.

At one point there was another west side store, over in the same neighborhood as Warzone, the Recess stores, and Gamers Haven, but I'm not certain its still around. There was also a second store in Great Northern Mall that closed a couple years ago. There was a store in Twinsburgh, but the owner moved quite a few years ago.

Beyond that 50+/- mile radius, I'm at least somewhat familiar with a couple stores in Columbus, Massillon, Toledo, and Erie and Pittsburgh PA. But that's a bit beyond the scope of this "review."
Posted by ZeroTwentythree at 7:00 PM