After the Captain died on their first mission, there was a brief debate over how to proceed. Initial discussion started on the assumption that they would sell the Captain’s ship, split the proceeds, and each head on their way.

Ruthee suggested an alternative. Although they barely knew each other, they (more or less) worked well as a team in their very brief time together. Many of the crew knew she spoke the truth when she pointed out that they would all be broke and unemployed again in a very short period of time if they simply sold the ship and went their separate ways. Nisha & Frodo agreed immediately. G-Roy and Kev took a little convincing. Egon just seemed to be along for the ride either way.

Although they had completed their first mission successfully on Iapetus G.XVIII, the Captain was the sole point of contact with the locals, and it was a tense political environment to begin with. The crew were left in a challenging position. Since they were not bound by the Captain’s contract, they agreed it would be best to board LAGWAFIS and find their fortunes elsewhere.

Both Frodo & Kev have leads that taken them to the Pelinore system.

Notes: LAGWAFIS is a repurposed science vessel, but none of the crew know much about its history. They have a repair bot and an Analyzer on board, and some unused lab space, but otherwise it is a no-frills transport. LAGWAFIS also includes a small planetary landing shuttle, The Slowdive. 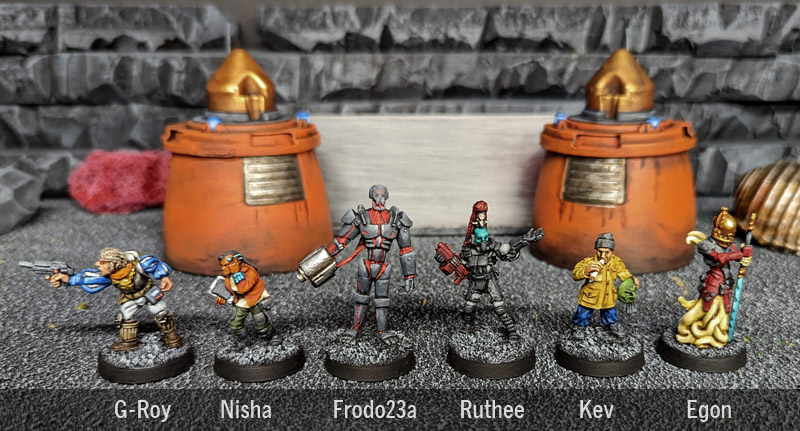 The Crew
Egon
K’Erin, Artist, from a Primitive or Regressed World
Egon is young in the spawning of their people, but older than the rest of the crew. They have a curious and creative nature, so took on the trappings of an Legionnaire. But where typical Legionnaires are mercenaries, taking the aggressive and warlike nature of their people to the outsiders and their worlds, Egon's mission seems more of one of exploration and occasional mischief. Their warrior skills, however, do help pay the way through the Great Ocean of Stars.

In their natural environment, K'Erin take a variety of forms, usually comprised of a slew of tentacles and various fluid filled organ chambers. Their environmental suits not only help them stay hydrated and chemically balanced, they can also help them assume a form similar to many of the other uplifted races they engage with. Most K'Erin don't have an identifiable face like most of the other uplifted races either, so some have taken to wearing the faces of honorably defeated enemies as a way to seem more familiar to those others & put them at ease. Or terrify them. No one's quite sure except the K'Erin themselves.
Whichever case may be true, Egon has taken it upon themself to wear an antique helmet in lieu of a face. Most of the crew is grateful, though Frodo23a has, in a manner outside their typical character, taken to making "jokes" regarding the helmet's resemblance to ancient robot designs and feigning their own offense, that Egon is either trying to relate to or mock their mechanical ancestors instead of targeting the more fleshy members of the crew.
Frodo23a
Soulless, Mercenary from a research outpost

The rest of the crew strongly suspect that F23a was part of the original crew of LAGWAFIS. The same has been said of the Captain. However one is dead and the other is not one for small talk nor explaining either their personal history nor the history of the ship.
Frodo is even more of an enigma to the rest of the crew than Egon. Where the former is playful and communicative (in their way), Frodo is quiet and follows their own almost "spiritual" path. They seem to have quickly found a foil in Egon, the K'Erin. They have common ground not only in the fact that they are outsiders in an otherwise human crew, but they also both struggle with being outsiders in reference to their home communities.
F23a has a moral code unusual for a Souless, one that the rest of the crew are only starting to comprehend.
Nisha
Human, working class, from a space station
Nisha was the third shift operations manager at the science research station Freeman Lowell. In spite of being the junior of the three managers, her staff frequently described her as "the glue that held the Lowell together." ..... (more to come)
Kev
Human, Scavenger, from a low tech colony
G-Roy
Human, Special Agent
Background: Drifter
Motivation: Fame
Ruthee
Human, Punk
Background: Drifter
Motivation: Technology