I have just learned that Dave Gulczynski, the man behind Warpaint Studio (link to his page in  the "Wargame Links" section, to the right) and occasional part of our local WFB group, has passed away.

He had a wonderfully clean and colorful painting style that made my figures look like dull little pebbles. His commissioned figures brightened up the local gaming tables, and the tables and collections of his clients around the world. I'm sad I never had him paint anything for me. Locally, everyone simply called him "Painter Dave."

Posted by ZeroTwentythree at 9:51 AM No comments: Links to this post

Not much going on in terms of painting or games since Cold Wars. The entire household (even the dog) has been dealing with various medical issues, and I've been sick for a week and a half.

As I previously mentioned, I did set up a work table, but it appears that I will not get a chance to use it. This weekend we learned that the house we rent has been sold. We've now got just over a month to try to find a new place to live, pack up and move. No money nor time to pack, but we've got little choice.

It's been about two years of feeling like I'm living on a rollercoaster, I'd really just like to exit the ride ASAP.

On a more positive note, my wife took one of my favorite family photos (so far) with her phone recently... 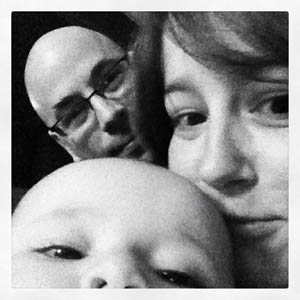 Back from Cold Wars. Had a good time. Spent time with old friends that I don't get to see nearly as much as I'd like. Although my events had to be scaled down, I think they still worked out well. Only 6 players (I allowed a max of 8) per event showed up. I played in a couple Day of Battle games. Got to see a lot of great games.

In fact, how about some photos? (More wordy bits at the end.)


My two WAB events. I revisited my previous Cimbric War demo game, with a few adjustments. Romans on the left in the first photo/game, Romans on the right in the second one. Romans won both games, though the Cimbri snatched defeat from the jaws of victory in the second game. They had managed to take both flanks, but instead of timing their frontal & flank assault on the Roman line, they hit it piecemeal, in one-on-one frontal combats. 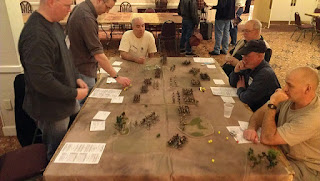 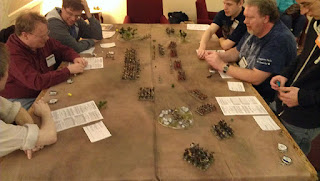 At one point a couple of guys walked by to look at the game, and one turned to the other and knowingly explained, "Lord of the Rings." I got an internal laugh out of it, but was too busy helping my players resolve a combat to explain otherwise.

These next two photos are of a table used for two games, if I understand correctly. First was a "Red Dawn" scenario, second was a zombie game. It was just inside the Distlefink Hall (my game was in the lobby on the other side of the doors) and at one point during my first game, we heard the cry go up, "Wolverines!" Great looking table. 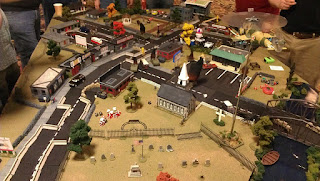 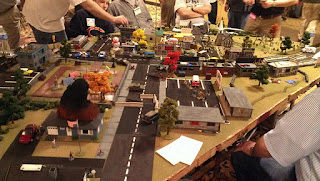 I assume this is some sort of Mars/VSF game. 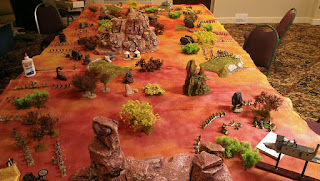 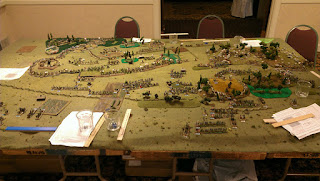 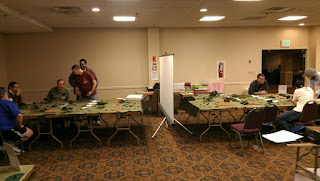 Great use of the "teddy bear fur" terrain. There were a couple of table using that material. 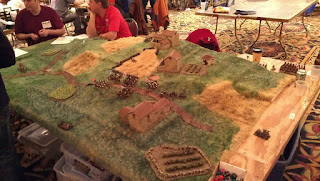 A couple shots of a beautiful looking game. Don't know what it was -- Napoleonics or 1812? Some more great looking games/tables follow. 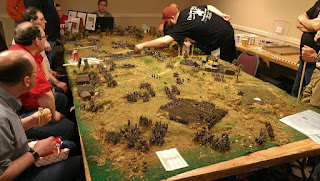 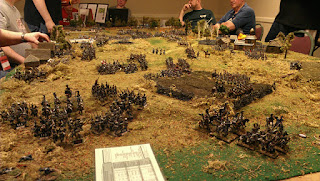 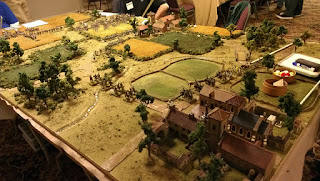 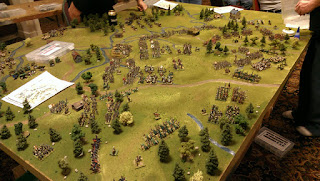 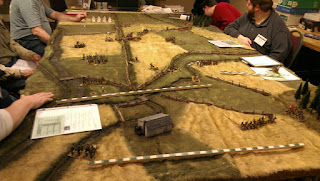 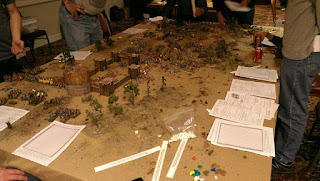 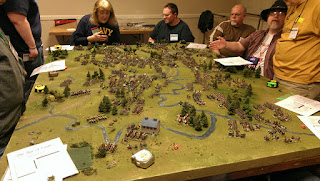 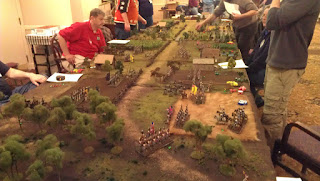 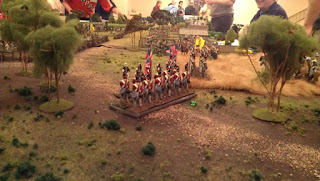 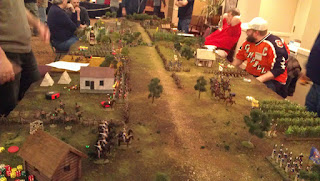 Another zombie game. 15mm this time. Hordes upon hordes of zombies flooding the streets. Some nice LED effects on some of the terrain, too. 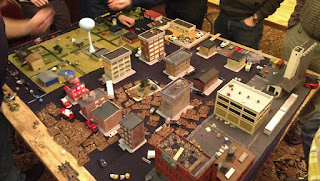 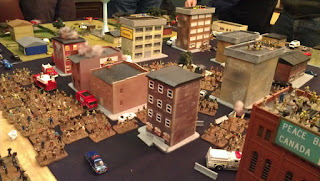 So, as usual, lots of great games, terrain and figures. A lot of zombie games. Probably one of the most popular genres.

I sold off some of my stuff in the flea market. Not as much as I would have liked, but I have no room to complain. Got rid of a few last bits of painted fantasy figures, as well as both painted and unpainted historicals. The most popular painted stuff -- by a long shot -- were the ancient Spanish. I would have never thought that, but I suppose there are always Romans, Celts, and similarly popular figures for sale.

I spent a record low this time. I only bought a couple items. The only flea market purchase was a single action airbrush that was labeled "never used," though when I got home & unboxed it there was obviously paint on it. I only paid $15, so we'll see how it goes. In terms of figures I bought a set of Eureka 18th century civilians that includes their string quartet set, C. E. Bach & his clavichord, Fredrick playing the flute, and Fredrick & Voltaire out for a walk. I also grabbed two packs of hobbits from Goblin Factory, and some pirate women from Bronze Age. That's it.

Architects of War Also had a great booth in the dealers hall. In fact, I *love* they way they display all the plastic kits, with a painted example of the contents on a pedestal behind each stack of boxes. I really wanted to take home the Otherworld giant, but it was way more than I could justify spending.

The only dark spot was having to deal with a seriously rude woman in the flea market. As I was still unpacking and putting prices on some things, she started rummaging through my stuff (she had a table too -- well, three of them, apparently) and disappeared with some of it, explaining "my table's right over there." Later on, after the market had started she returned some of it, but kept at least one item. Later still, I had to go looking for her to either get my item(s) back or collect my money. Rather than pay what I was asking, or even try to haggle, she more or less insisted that I should take what she was offering. After a second trip closer to the end, I finally collected the rest of it. It wasn't even the money itself that annoyed me -- rudeness really irritates me and will only make me unwilling to give ground against that sort of person/behavior.

So this was probably my last show for a while. I'm not sure when I will be able to get to another one. Historicon is definitely out. A little bittersweet, as I had previously resolved that I needed to put painting and gaming aside, but this weekend really reminded me of how much I enjoy the hobby. So I'll see what I can try to work on in the little spare time I've got.
Posted by ZeroTwentythree at 1:29 PM 5 comments: Links to this post

I'm heading to Cold Wars on Thursday, and will be (hopefully) selling a lot of my collection at the flea market.

I am still considering a skirmish project. So I'm considering what I may buy while I am there, using some of the flea market proceeds. I think I'm on to something:

...well, you see the pattern. I'll just paint up no more than a dozen of whatever figures I feel like at any given time, and work a game around that. This gives me an excuse to pick of a second pack of Black Scorpion pirates, a few more cowboys, and a reason to get some of the Hydra Miniatures retro robots. I'm now regretting I got rid of my single squad of early war WWI French a while ago, that might have been a good addition.

I'm considering adapting some mechanics from a couple of older games, Killzone and Bladestorm. We'll see how it goes.

I spent a little time this evening unpacking & setting up a little work space in the dungeonous basement, under the clothes lines. Far from ideal for quite a few reasons, but hopefully I can work something else out in the not too distant future (provided I even have time to use it.) 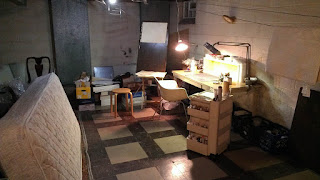 Posted by ZeroTwentythree at 9:00 PM No comments: Links to this post 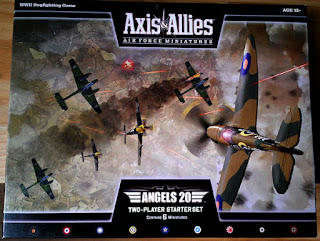 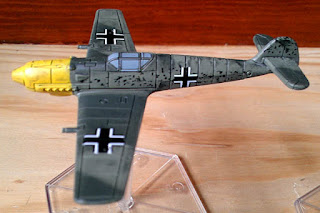 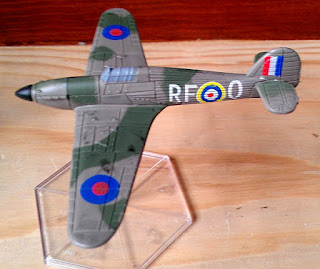 I will report back in another week or two, when we've had a chance to try the game out.
Posted by ZeroTwentythree at 12:15 PM 2 comments: Links to this post