I painted some Reaper dinosaur figures that I picked up on eBay to fill the role of Carnivore Chasers & Razor Lizards in Five Parsecs. These were speed-painted, using Citadel contrast paints for the color. Dinosaurs in space? "Life, uh, finds a way." ;) 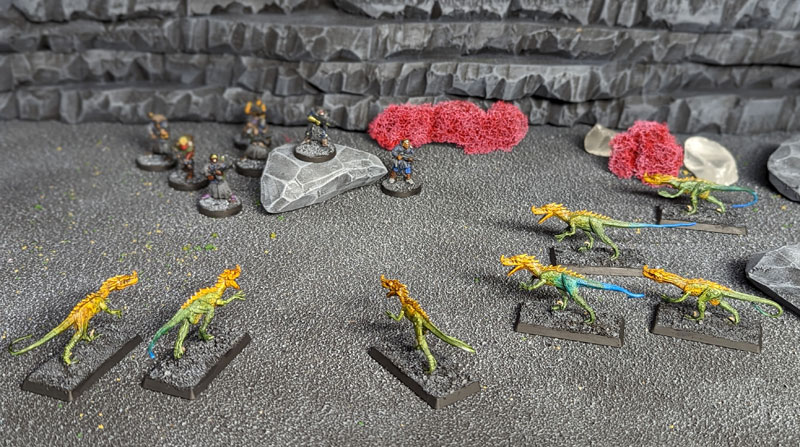 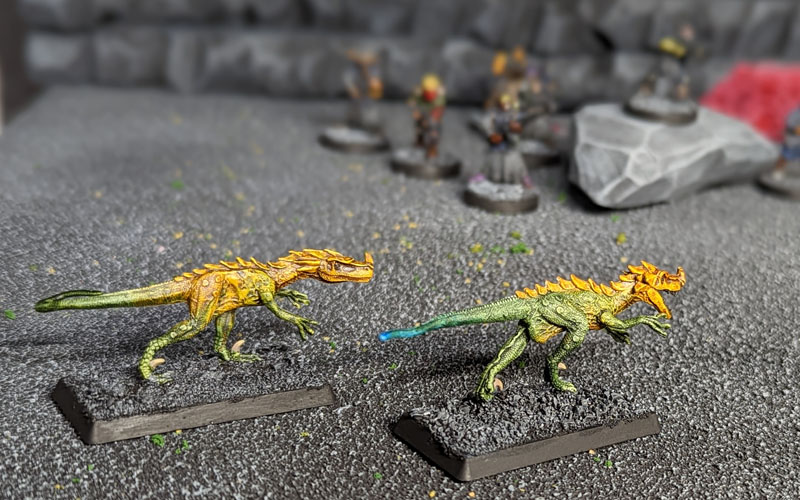 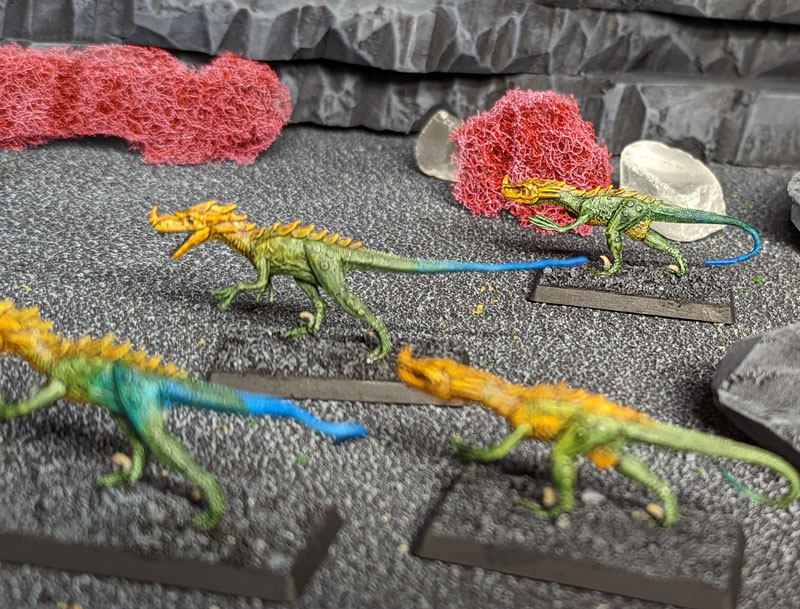 Posted by ZeroTwentythree at 10:42 PM No comments: 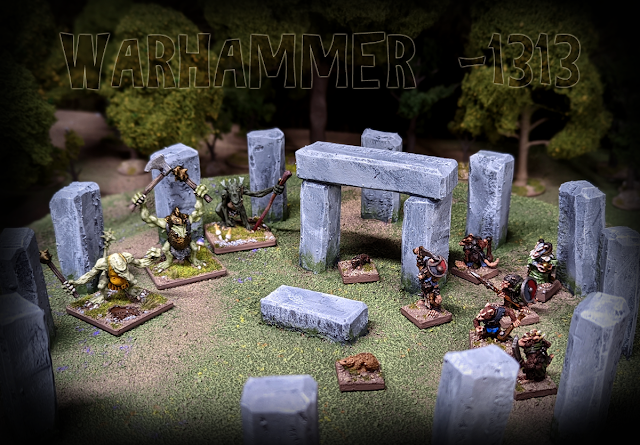 I've had this idea lingering for years, and it has bubbled back to the surface. Oldhammer. No, not like that. This is Warhammer set in the in-universe past. Sort of like the War of the Beard campaign & lists published in WD long ago.
Based on my interests and collection, my setting would be sometime after the War of the Beard, but before Sigmar, and set in my favorite place in the Old World: The Wasteland/Westerland.

I like the idea of setting it in the time just before and after the cataclysm brought about by the strife between the Fimir and Skaven. Arbitrarily I'll set this around the year of the Imperial Calendar...

Two major factions would be the afore mentioned Skaven & Fimir. Two secondary, or maybe more like something between primary and secondary (prime-and-a-half-ary?) factions of humans and dwarfs. Dwarfs would be at a bit of a low point in their history, suffering not only from the toll of the War of the Beard, but supposedly the natural (or Slann and then Skaven/Fimir induced un-natural) disasters that came after, and the goblin incursions the followed that. Humans would be from the early migrations into this region, which (according to what I could tell from Warhammer lore) lagged behind the earlier human settlements in the future neighboring lands of Bretonnia and Tilea to the west and south respectively.

Tertiary forces or supporting characters could include goblins, undead, giants.
I've got a lot of this thought out already. The big, undecided portion for me is the humans. I fluctuate between envisioning them as early Celtic or Germanic tribes, and somewhat later Migration Period Germans (Goths, Vandals, or early Saxons). The depictions in Warhammer art & books seems to favor the former, but I feel that's a bit out of place. Maybe just "modern" in-world source biases of "everyone a few hundred years ago was a primitive barbarian" bias?

For the dwarfs, I definitely want a look that's different from my puff & slash mercenaries. There's quite a few options for dwarfs with an early medieval "dark ages" aesthetic, and that's what I'd probably aim for.  These would all be fairly small army projects.
Posted by ZeroTwentythree at 8:43 PM 4 comments:

These are some board game figures I bought from eBay and painted with color-shifting paints and ink. They will serve as Distorts for Five Parsecs 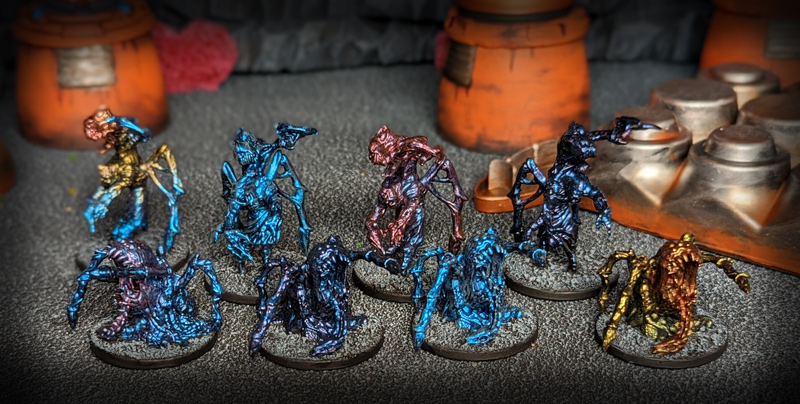 Posted by ZeroTwentythree at 5:47 PM No comments:

Ages ago I took a course in small scale resin casting with a local artist We each made a quick, small sculpt then created a mold, and made several castings.
After recently messing around with resin and jewelry molds with my daughter, I pulled out the old silicone mold and... it has way more life in it than expected! So I've been messing around with clear resin and inks, casting gems with/for my daughter and making more of these little things that I see as the first of several potential "alien fungi" for gaming terrain. I painted one of the original castings up just before I started my casting experiments. Here's where I am at today, the blue/sapphire was my latest color. Regardless of the inks & colors, my plan is to paint them. The inks/colors are for me to experiment with before trying to produce something with that sort of translucent quality in a more refined finial format. 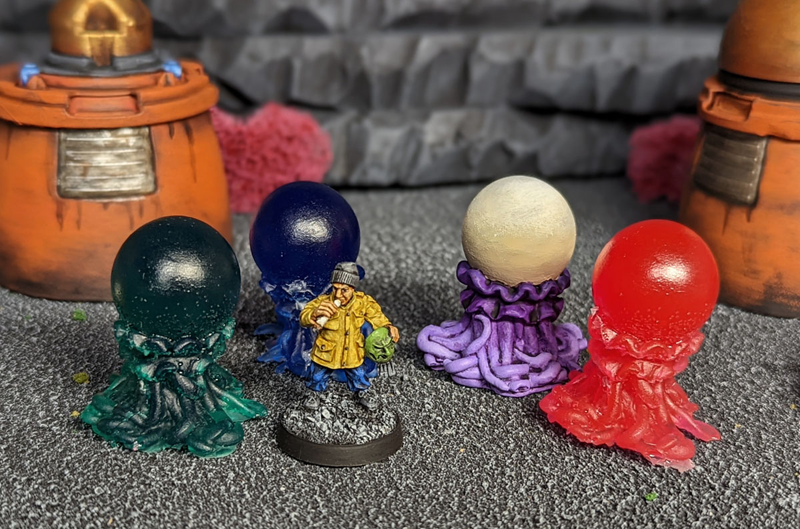 Eyes in the Sky

These little fellas will serve as Void Rippers for Five Parsecs from Home. Possible also giant bats in The Liche's undead army and other roles as well.
Figures from Ral Partha Europe's Das Schwarze Auge range. 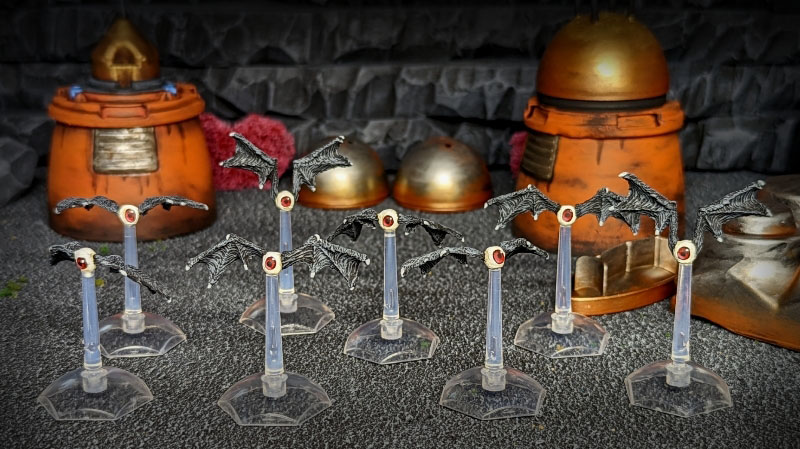 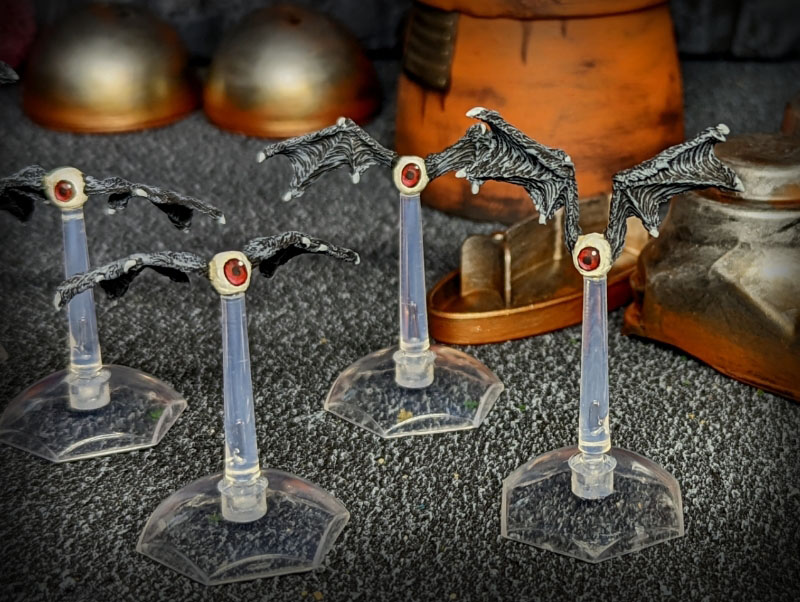 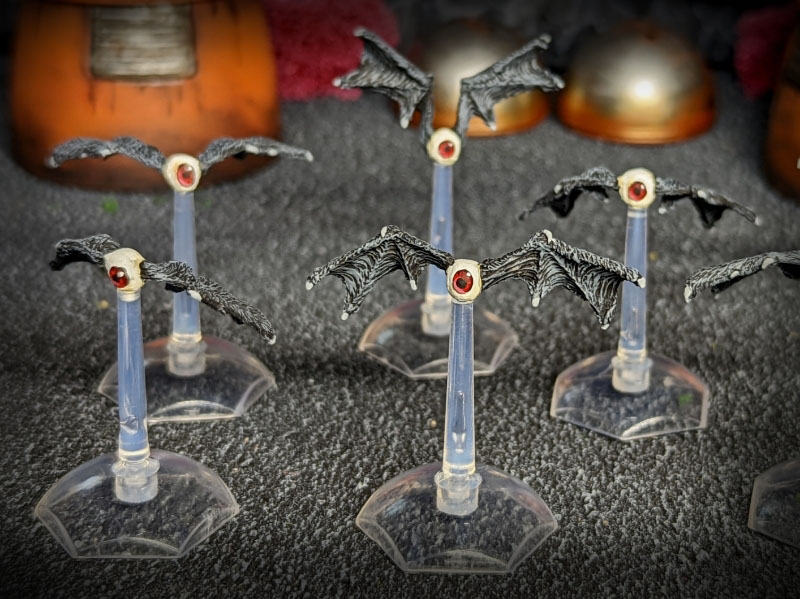 Posted by ZeroTwentythree at 3:04 PM 2 comments: 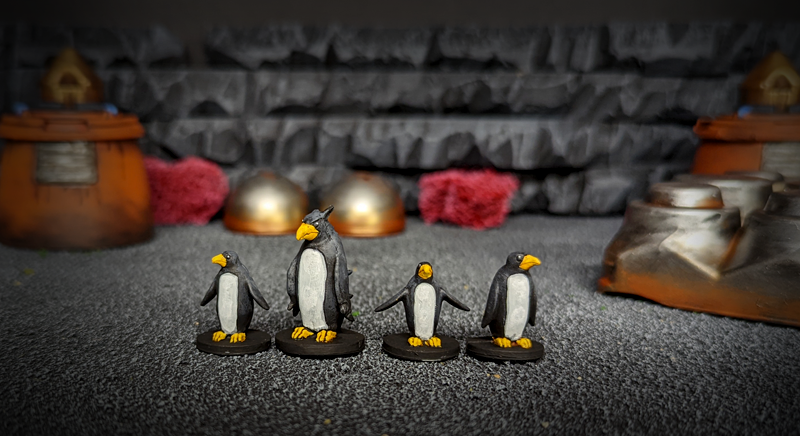 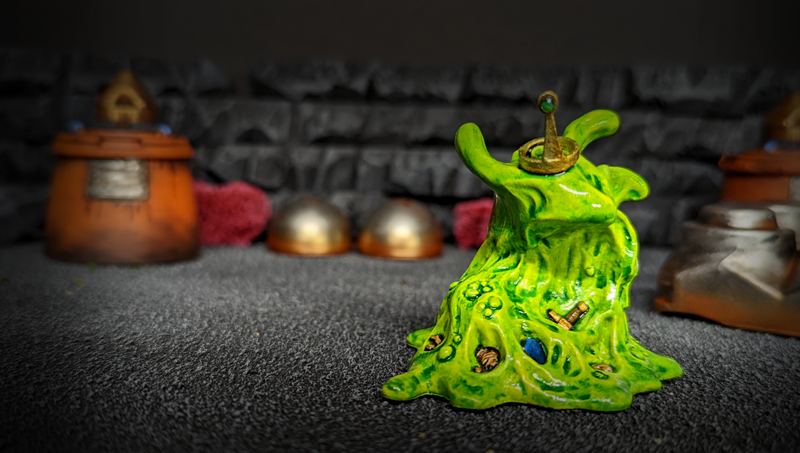 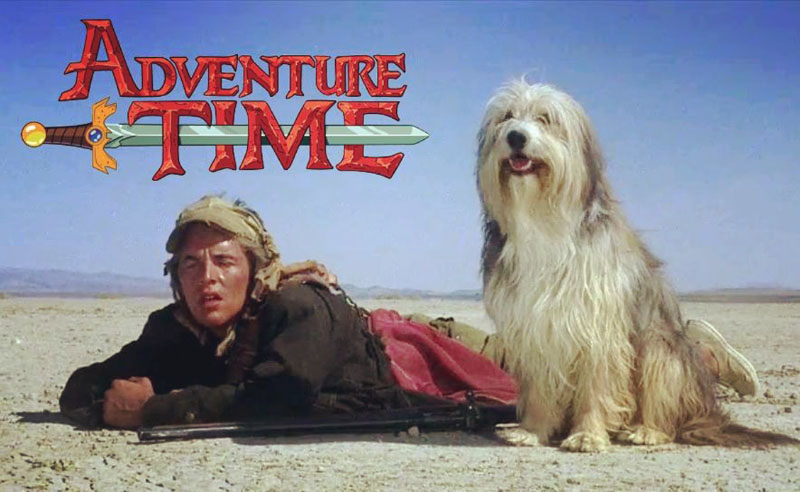 Posted by ZeroTwentythree at 11:13 PM No comments: 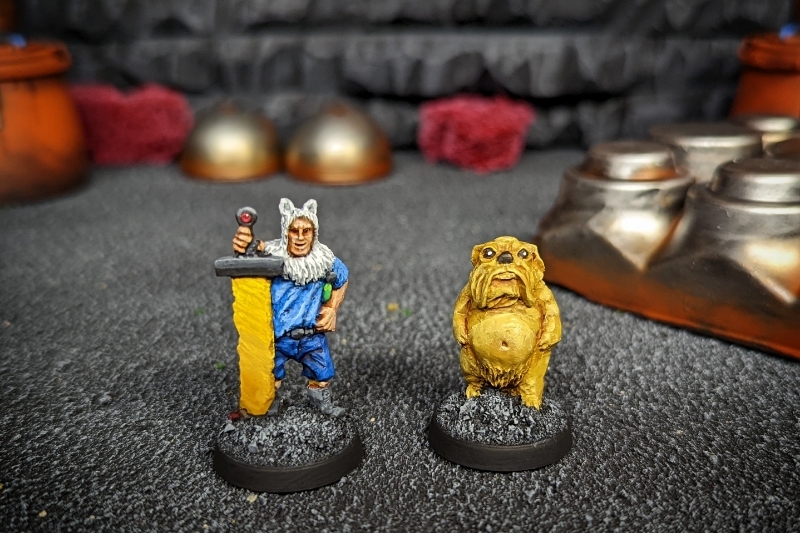 Posted by ZeroTwentythree at 10:34 PM 3 comments:

Happy Easter from the original Oldhammer villain, the eternal malice... 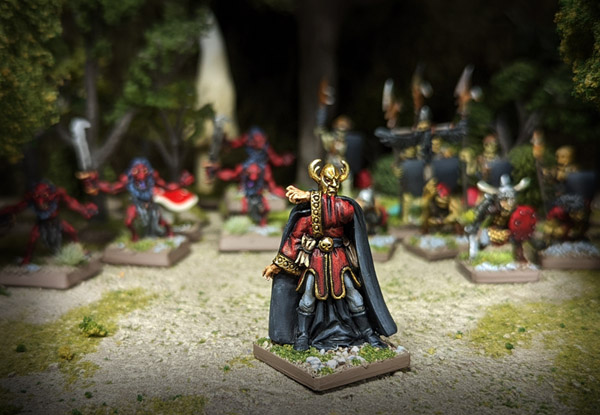 "Heinrich? Heinrich who? Oh that young kid with the magic sword? Terrorizing family farms and avenging himself upon half-ruined monasteries. Such low ambitions. Tsk."
Also, couldn't pass up a holiday themed photo of the crew of LAGWAFIS. 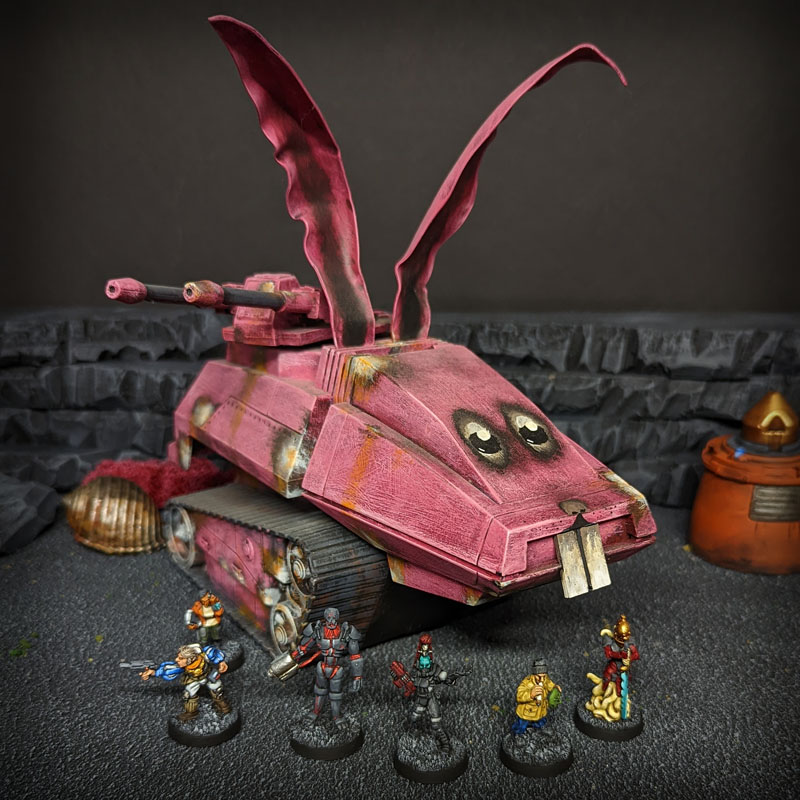 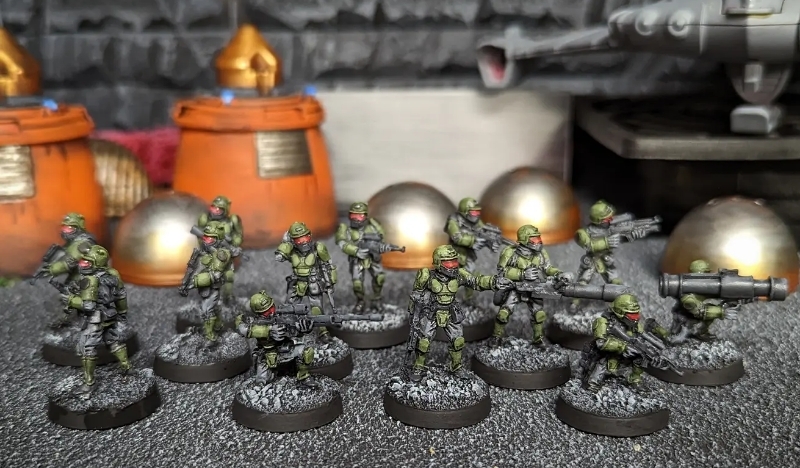 (((Addendum))) Artwork that I assume inspired the Drachenfels figures above, from the WFRP Castle Drachenfels. 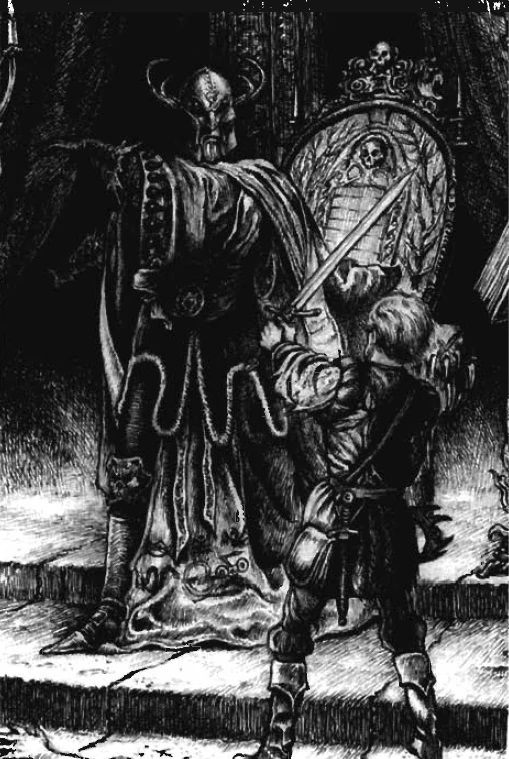 Posted by ZeroTwentythree at 1:07 AM 2 comments: