I was getting nervous. Work and personal life were keeping me busy through the third week of Janary and I hadn't started my first month's entry for the Old World Army Challenge!
But after a frenzied weekend-plus of painting, I managed to pull it off.I was helped out by the relatively simple color scheme. I painted Eldar serpent squads to match the previous test figure. 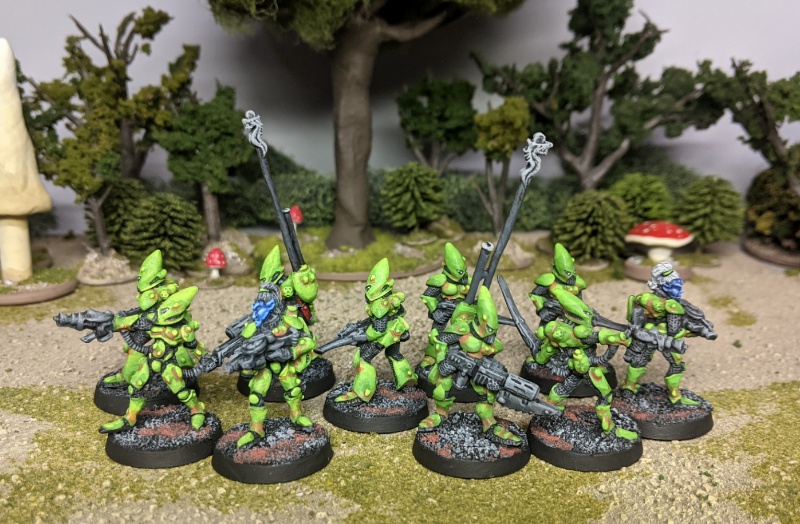 See more preview photos, words & stories, and stuff at the actual Old World Army Challenge blog! Go there and see how I have already derailed my carefully planned out OWAC schedule right out of the gate. Take a look at the other AWESOME entries that have been posted by other participants so far.
After being away from sci-fi painting/gaming so long, I'm getting psyched up about this project as well as the Meat Hating Robots. Jamming out to space themed music while working on these projects, too. Current mood:
I'm also working on some fluffy setting stuff. A lot in my head or in Google Docs files right now, but I've been letting bits slip in the OWAC entry, my Instagram account (@023minis) etc.
Posted by ZeroTwentythree at 11:51 PM No comments:

Since I am finally diving back into retro "Alt Trader" sci-fi with my 2021 Old World Army Challenge Eldar and finally painting up some Meat Hating Robot Pirates, I've started thinking about the larger setting. Not too large, mind you. But enough to give some context and purpose to my project.
So I've got a general concept of a far corner of the galaxy occupied by the Imperium. The border along the Void, a vast and theoretically empty space. Starting to get an idea for a couple of locations. One planet in the border region, nominally under Imperial control, but administrated in a semi-feudal style manner. Another being a large independent space station (Carcosa) in the uncontrolled Void.

I'd like to start collecting some "supporting characters" for the settings and (hopefully) future games & campaigns. Some will be generic, some will represent specific recurring characters. This is all a bit similar to my fantasy project, but smaller. For now I'm keeping it vague and working with what I've got... 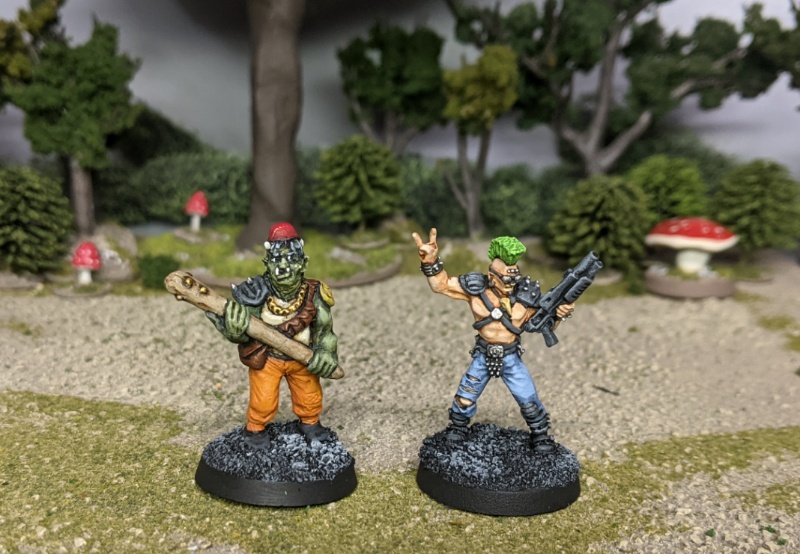 Like these two freshly painted chaps. On the left is a Grenadier figure, (c) 1990, with the base stamped M423. I think it may be an old fantasy orc...? Not sure, it appears to have horns on its head. I would love to know the provenance of the figure.. But for me, the whole look seemed like a good fit for supervisor or senior tech in a dock. On the right is a figure I got at the Oldhammer Day 2016, I think he was sent to our group from someone who provided him for one of the UK Oldhammer days. I'm sure someone else can help shed some light on the provenance of this figure as well. A very Wez looking tribute to Road Warrior and the tome of Rogue Trader.
I also based/re-based a few figures for use in the new project/setting: 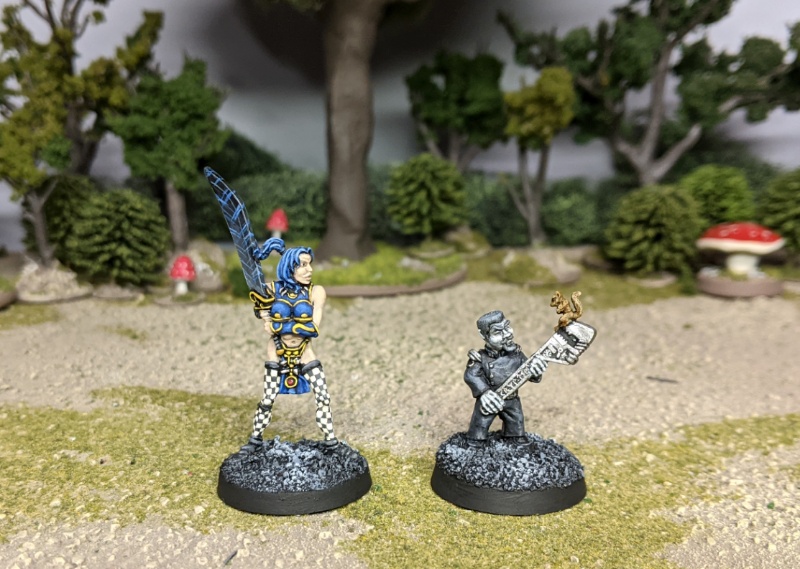 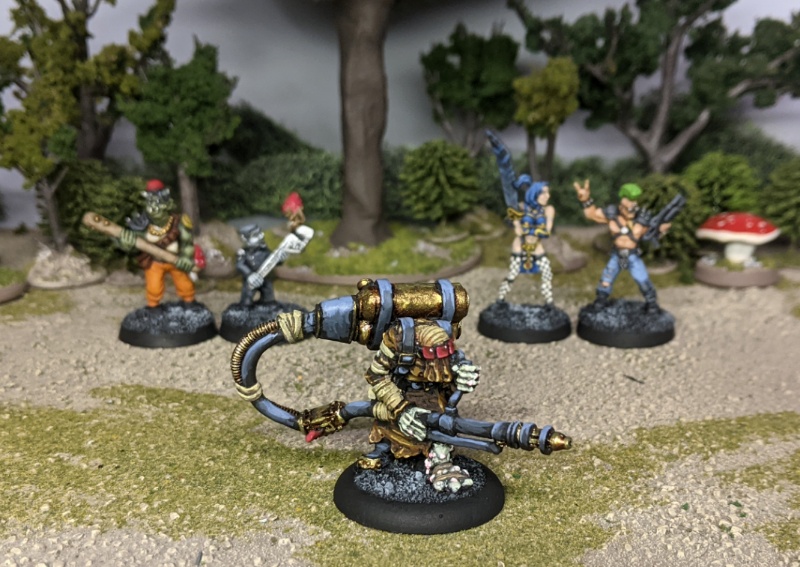 I'm currently digging through my old figures and online sources for more "supporting characters". Suggestions for figure sources are welcome. Looking for that old Rogue Trader & '70s/'80s sci-fi aesthetic, but open to a lot of other stuff too.
Posted by ZeroTwentythree at 2:19 AM 1 comment:

One more 'bot. This is from Warlord Games' Antares range. 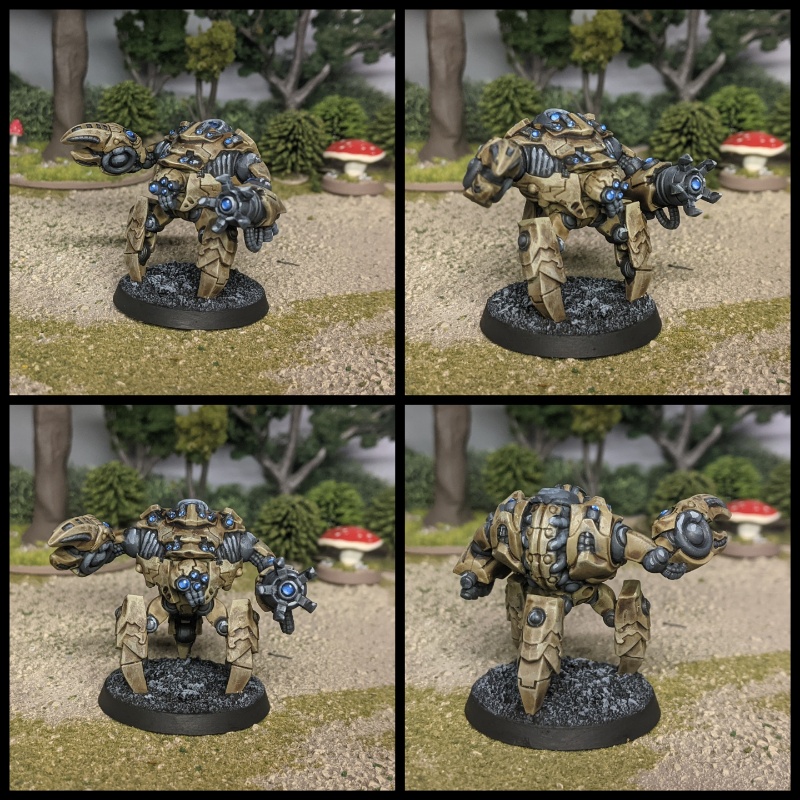 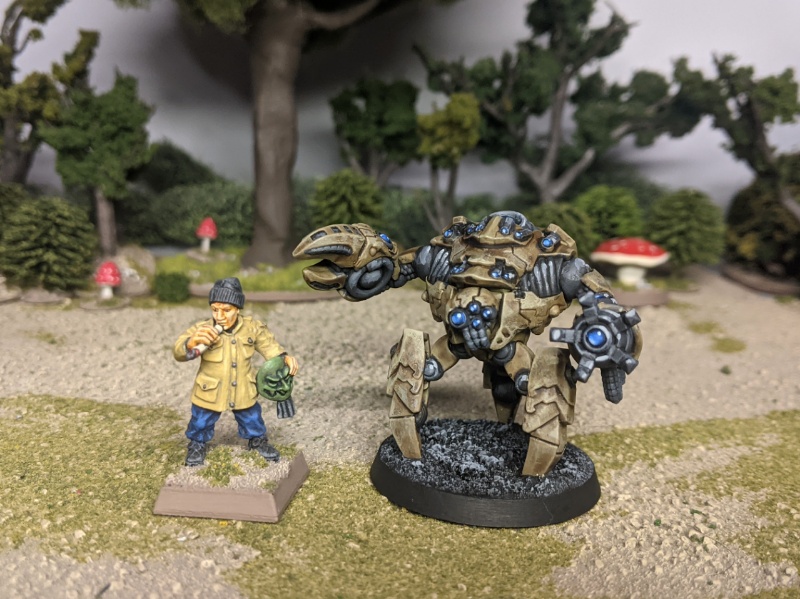 Posted by ZeroTwentythree at 2:04 AM No comments: 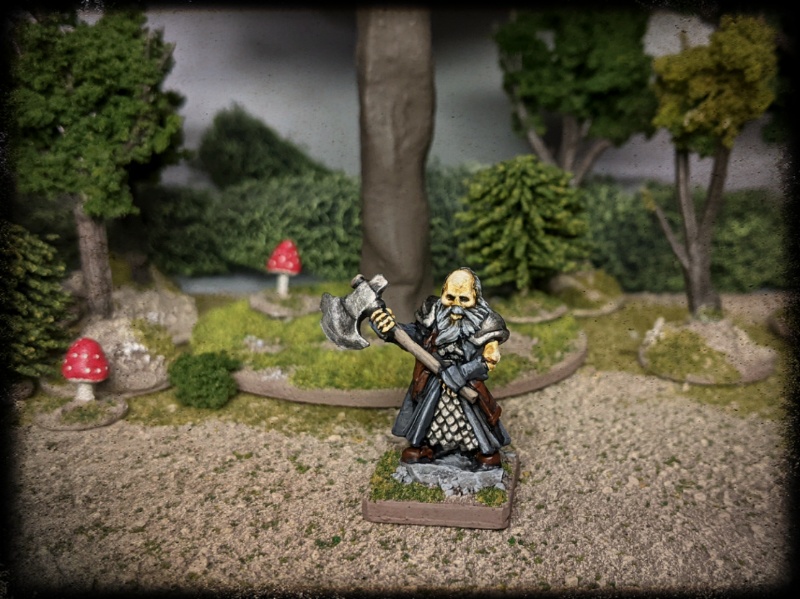 "Beers unnumbered ye shall spill; and the dead shall assail you to the last, so that not even the echo of your lamentation shall pass over the mountains. On the Company of Dozens lieth the wrath of Kandos, from the West unto onthe uttermost East. To evil end shall all things turn that they begin well. Ye have spilled the blood of your kindred unrighteously and have stained the ancient brewhalls. For blood ye shall render blood and perfidiously bought ale, and beyond the brewery ye shall nevermore dwell."
- The Doom of Kandos
Posted by ZeroTwentythree at 1:42 AM No comments: