I drove down to Origins in the morning, picking up my co-pilot on the way. After discovering the parking lot I had mapped to was full, we drove around a bit (in confusion) trying to find another spot and unfortunately picked a garage by the Arena. We have the plan for next time, however, for making use of the loading docks.

Before lunch we wandered the massive vendors hall. I ran into a few people I wanted to say "hi" to but not all (nor even most) of them, unfortunately. I could have used a few more hours to really wander around and look at everything. A lot of interesting stuff... 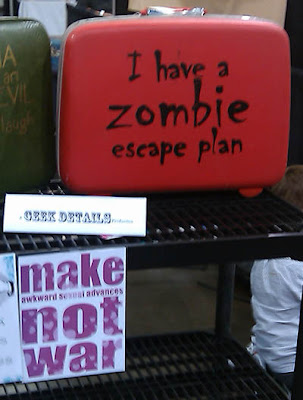 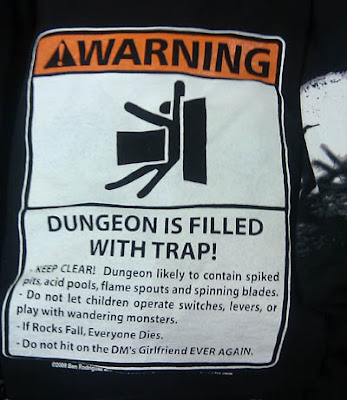 I stopped by "the bitz guy" (The Game Room) booth and picked up a few small things I had been looking for. Unfortunately, none of the DoW I was looking for.

There was one place that had a ton of cheap books and 50% off old Confrontation metals. I grabbed one box of gunners for which I have been looking, but didn't have enough time to really go through it all.

So I was pretty successful in not spending money. I did, however, find something with which to score points with my fiance. She's a big fan of Michael Parkes and there are a few prints/posters she's been dying to get. At the big art booth, I thought one of the posters at the back of a stack looked familiar... 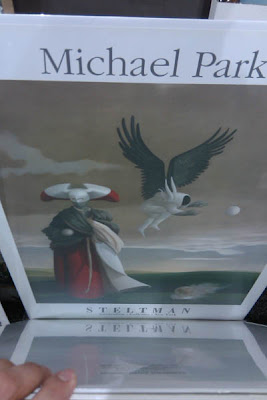 After lunch I met up with the small WAB group organized by Ralph K. It turned out that I was the only one with a civilized army (and their opponent,) everything else being what some of the WAB-list refer to as "bog wallowers." I almost got suckered in to acting as a Viking general, but ended up coaching a couple of new players through the game using my Romans & Cimbri (Gaul list from HatPW.)

A few interesting twists before the game started. The armies were still packed up from my previous demo games, which use a bit more than 2000 points. So each side had some extra troops. Then we were put on what looked to be the smallest table (about 5' wide) with some really clogging terrain. It was interesting watching the players deal with it. 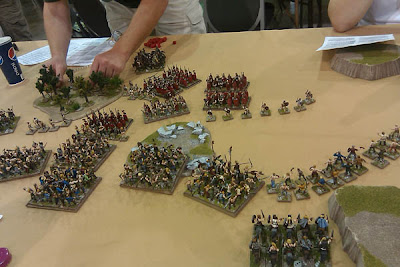 The game went back and forth for a bit, with the Romans scoring some early advantages. Both players seemed to have a good grasp on the game and tactics, however neither one of them could roll dice to save their life. Quite a few large "buckets o' dice" combats resulted in a single wound or none at all. Everyone enjoyed themselves however, including me, and the game took a dramatic twist at the end when the Roman general couldn't seem to roll anything under a 10 on two successive waves of panic tests. 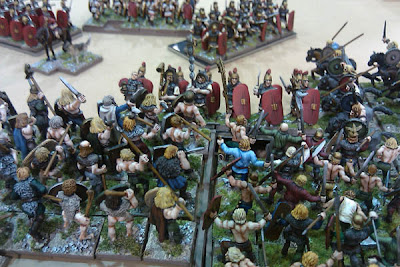 There were five games going at any given time, with a number of experienced players coaching some of the new players along the way. 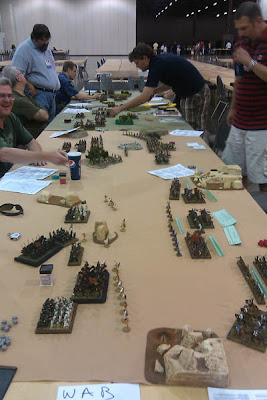 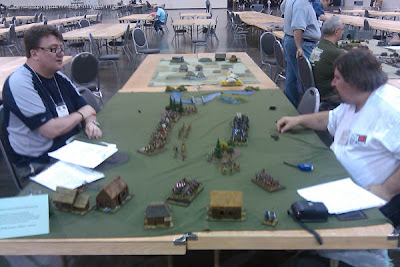 It's been quite a few years since I've been to Origins, and the last time I went I didn't get much time to leave the table where I was helping to teach miniatures painting.

The miniatures hall at Origins is HUGE, with plenty of space for twice as many miniatures games. With all of that room, and a large number of people wandering around, several things seemed strange to me, especially given that it was Saturday:


So my plan for next year is to come back for more of the weekend, and try running some games, and maybe even play in a few.

Posted by ZeroTwentythree at 10:20 AM No comments:

I was just going through some of my Romans. I believe I previously discussed my experience with ordering some Foundry command packs. My first pack had two Pompey figures, Caesar was missing a foot, and there was no council. Looking through the replacement figures, it seems that one of the horses is miscast, with one of its back legs dwindling off to a point just after the upper joint.

Two packs at "premium" price, both packs had casting errors, one had the wrong contents, and the figures generally had poor sculpting. Can't say I'm fond of Foundry lately. Especially given the quality of a lot of the competition these days. At least the horses were sculpted nicely.

Ah well... to relax a bit & get ready for my trip to Origins tomorrow. :D
Posted by ZeroTwentythree at 7:05 PM No comments:

Email ThisBlogThis!Share to TwitterShare to FacebookShare to Pinterest
Labels: Romans

This weekend is Origins Game Fair in Columbus, Ohio. It's about two hour drive for me. This year I'm only heading down for the day Saturday. My plan is to wander the dealer's hall, gawk a bit and then meet up for some informal & unofficial WAB games.

We're still gearing up for the summer campaign at Warhammer-Empire.com.

After seeing some of the site members participate in a couple of figure conversion contests, a few of us on the campaign team wanted to do an unofficial contest of our own. Site members voted on a character and set of equipment, and we were given our task. Here's mine before and after painting.


In the meantime I've been working on some stuff for the newsletters, as well as another project. I probably shouldn't do this, but a slight sneaky peeky of the work in progress... 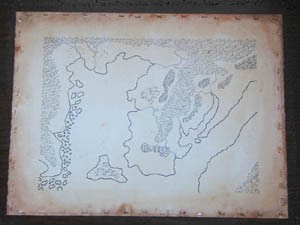 So the big news around town is the impending release of WFB8. I find myself less and less excited. I'm going to give it a chance, but it seems like the direction in the rules is the same as that which drove me away from 40k a few editions ago.

Rumors of "true line of sight" have led to some crazy modeling suggestions on W-E.com. Things like modeling cannons on top of tall rocky precipices. This pic was my contribution -- a new take on the longrifle sniper. 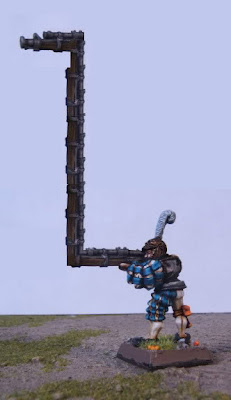 I realized I never finished the reports from the Southpark Tournament in April.

Game Three. Vs. Skaven. I win. I finish second overall.

It was an interesting game. Especially since I've rarely faced off against the Skaven, and have more typically been leading one. I was facing two Doomwheels, a Seer on a Bell, some big blocks of infantry and other typical ratty stuff.

I got an early advantage when I blasted the Seer off his bell right away. This was slightly balanced by the fact that Doomwheels are the perfect tool against Steam Tanks. One of the wheels didn't last long (a glorious charge of some 'nilla knights finished it off) but the other one destroyed one STank and damaged the other.

In the end, the Marienburgers were victorious, and Frank and Lucy even (finally) earned their keep and did some damage.

I'll see if I can get around to posting some photos and more details later. No guarantees. Once I'm this far behind, a complete report is unlikely.
Posted by ZeroTwentythree at 11:05 AM No comments:

Gaming & painting continues to be a bit slow around ZeroTwentythreeland.

Social & family events, additional time at work, and wedding planning have been keeping me pretty busy.

The good news is that I did make it to my old gaming group's Game Day over Memorial Day weekend.

In the first time slot I played in a home-brewed murder mystery miniatures game, set in a 1920's town full of secrets and beset by wolves, snombies (snow zombies!) and me... I was secretly the murderer and achieved my mission to transform myself into an unholy monster. (And presumably eat the rest of the townsfolk.)

In the second time slot I ran the WAB demo game that I had hosted at Cold Wars earlier this year. It went pretty well, though this time the Germans & Gauls won. An early blown combat by the Romans, along with the overrun into the general (who then fled off the table) helped give an early advantage. The one flank where the Romans were initially doing well was counteracted by a lucky barbarian rally.

The third time slot was a big game of Blue Max/Canvas Eagles. It's been a while since I've played, but after just one turn I was back in the saddle (or buckled into the wooden bench, to be more appropriate) again. The allied player directly across from me at the start asked to be shot down quickly, as he had to leave for another commitment. My plan initially failed and he ended up tailing me right away. I quickly put on the breaks & pulled a stall, ended up above and directly behind him and shredded/exploded his plane. I took a little damage as the game progressed, but by the end I was the only one flying against 3 or 4 allied planes, while facing the wrong direction. So I bravely flew off into the sunset...

The WAB game still used the WAB 1.5, as our 2.0 books only recently arrived, after about 5 weeks wait. Hopefully we can try out the 2.0 rules in the next couple weeks. If I can get some time, that is!

As far as painting, I've not had a lot of time. Mostly I'm trying to wrap up a few small commissions. I always try to get at least a little something for myself in the lineup, though. So I've got 9 Balearic slingers on the table at the moment.

I do need to consider what focus I will take next, however. I'd like to start hosting more games at the game club(s), at my place, and at conventions. Although I've got some other projects I'd like to move on (Successors, Carthaginians, etc.) I'm thinking that since I've got a decent start on the Romans anyway, I should just push ahead with bigger and better battles in the civil & Social wars of the first century BCE.

Although the new WFB is out soon, I'm feeling a bit "done" with the game for a while. I will pick up the rules. But my will to paint more Skaven has been sapped before it even got charged up. I'm more in the mood for expanding on the Empire troops, though I'm still not "excited" by WFB at the moment.
Posted by ZeroTwentythree at 10:05 AM 2 comments:

Below is a quick diagram I did to show how I magnetize my carrying cases/boxes, movement trays and figures' bases. (Click to enlarge.) I've started to change from galvanized steel for the top of the movement tray to "paper steel" (I got mine from Renaissance Ink.) It's easier to work with.

I've also switched from basswood bases and chipboard/basswood movement trays to plastic, since the plastic is more dimensional stable, so everything's not warping so much with changes in temperature & humidity. 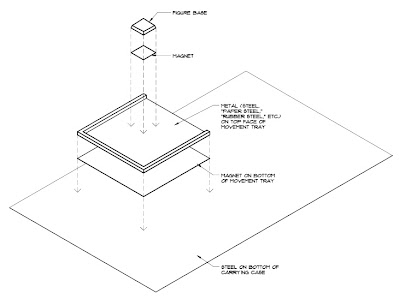 Posted by ZeroTwentythree at 11:51 AM No comments: