No sooner than I sit down at the miniatures painting table for a day or two, than I'm distracted by other things.

One is the Spaces Gallery 10x10 Benefit, for which I donated a watercolor (which I hope makes some bidder/donor quite happy -- as I liked it and I'm actually a bit sad to see it go).

The other is Halloween! I always have such grand plans for costumes. One out of every ten years do I actually pursue them. The rest of the time it's just whatever I can pull together last minute.

So granted, this is still dragging out til last minute, but I've been working on it. Probably for an inappropriate amount of time.

Here's 3/4 of the way through tonight's painting. I wanted to try the top part of the costume on... 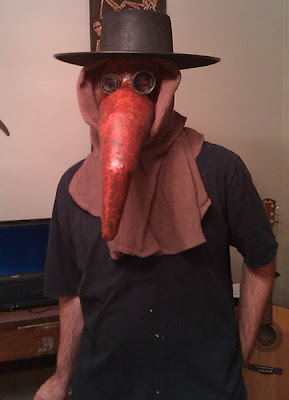 I've since added some further texture & darkness to the mask, plus gathered together the rest of the costume, added some details like the metalic color and patina to the lenses & associated structure (screw heads...)

A few friends have gone off to Fall In this weekend. I've sent a request to buy me a pack of the Perry WotR plastics plus one of the command packs. Perhaps more figures on the horizon. ;)

In truth, I've been working on some commission stuff in between mask-making & other scheming.

Posted by ZeroTwentythree at 12:48 AM 3 comments:

In pursuit of more accurate photos, I picked up some compact fluorescent "daylight" bulbs to replace my incandescent "GE Reveal" bulbs that I've been using for photographing figures, and fiddled around with the settings on my camera to accommodate the change.

I also borrowed my wife's camera, which is more than a few years newer than mine, and an upgrade from 5 megapixel to 8 megapixel. Both are "semi-automatic" type cameras that have a lot of the manual settings, but aren't nearly DSLRs. Both have decent macro functions as well.

The photo below is the best of the bunch. It was taken with my older camera. I couldn't seem to get hers to quit "over exposing" the shots. I will continue to play with both cameras. But I think the change in light bulbs is an improvement.

The figures are just miscellaneous painted figures I had on my work desk (where I also take the photos) and haven't been put away yet. I was trying to get some different colors, textures, etc. in the shot.
Posted by ZeroTwentythree at 8:28 PM No comments:

I finished the Squid Trooper. A lot of it was just me playing around with some colors and techniques.

Also painted a rabbit from a pack of familiars. Orange, of course. 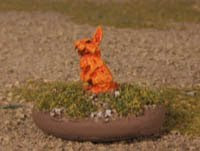 Wrapping up a dragon (commission) some Empire stuff and some ECW. Still trying to figure out what I want to pain for myself after all that.
Posted by ZeroTwentythree at 8:21 PM No comments:

It's Official; plus: Actual Painted Figures

It's official, I am now a married man. 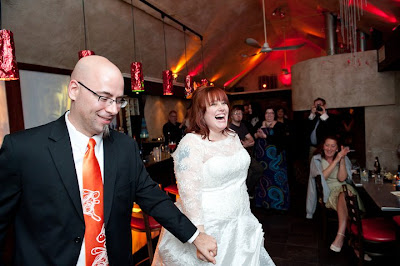 We risked in outdoor wedding in October and everything turned out great. We had a wonderful time, and the next day, we hit the road... 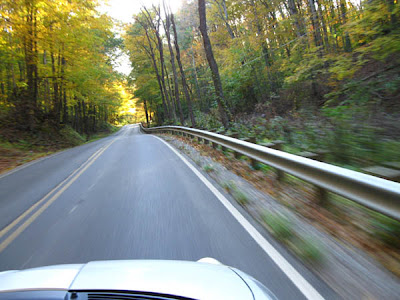 ...to a cabin in the woods in south-western Ohio for four days. It's my favorite area for vigorous driving. We also spent a good deal of time hiking around state parks & caves, grilling outside and we even rented some ATVs one afternoon. It was definitely a city boy's adventure out of his element. And a lot of fun.


We came back and I got a little bit of time at the painting desk, though we've both caught some post-wedding plague, so I've been a bit out of it the past few days.

Below is a WIP shot of one of Wargames Factory's Shock Trooper models (or "shock squid" as I'm calling this one.) I got a sample sprue in with a recent package, and thought I'd paint a couple up just for fun.

You can also see a few sample figures from the upcoming War of Spanish Succession kit that I painted for them, at their web page. Better photos are forthcoming -- these were just a bit of a teaser photo. I've been holding out for someone to do some later 18th century kits (like AWI or SYW) but I think I may end up tempted into the WSS after all. 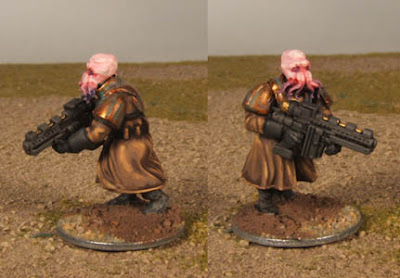 Posted by ZeroTwentythree at 2:03 AM 5 comments:

Painting on the Horizon & Mystery No More

My painting desk has been collecting junk and unused for a while, as I've been busy with other things. I cleared off some of the paperwork that was on top, and unearthed the sub-mess beneath. Soon I should have time to get back to painting figures. 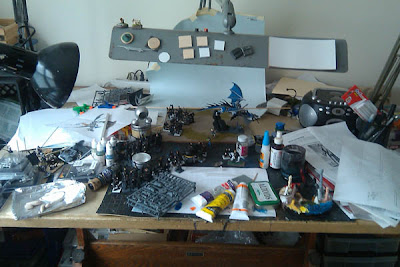 The first orders of business are finishing some commission figures. The dragon in the background has been almost done forever, I just can't seem to get more than 15 minutes at a time to wrap it up. That's number one. I've also got to wrap up my figure for the miniatures-swap at warhammer-empire.com. I'll be cutting it close to the Nov. 1 deadline. A little change from being one of the first ones done last year. Then I've got a small batch of commission figures started (just to the rear/left of those sprues in the foreground.)

After that, I hope to do some more painting for myself. I've got quite a backlog of projects. (In no particular order.)

I finished my "mystery sculpt," shown below. It's a bit glossy at the moment, and may stay that way. It's a cake topper for my upcoming (a week away!) wedding.

I paint/draw orange rabbits, my fiancé loves butterflies. On our invitations we had an image of a butterfly landing on a curious rabbit's nose, and she wanted something like that for the cake topper. 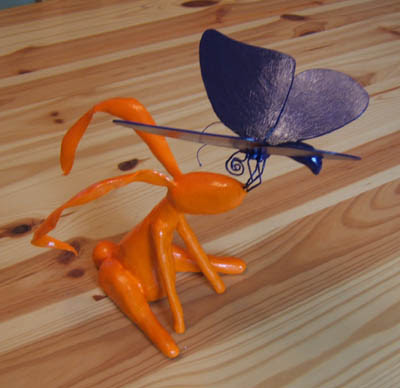 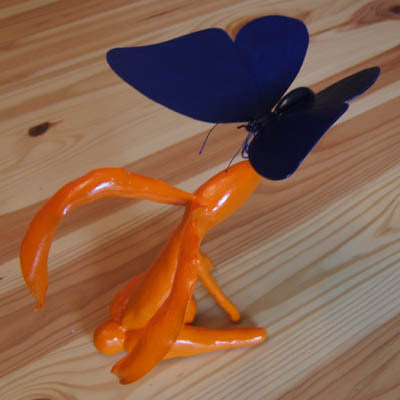 My artists' acrylics were a bit old. I undercoated each with a lighter shade (yellow under the orange and cerulean under the pthalo blue) and everything was fine. But the orange and pthalo both turned out very thick & chunky, leaving a lot of texture. I tried fixing this on the second coat, but only made it worse before going out and buying two new tubes of paint. A bit too late, though, so there's still a lot of texture. I really wanted a nice smooth finish.

This will probably be my last update as a single man. But the next one should have some actual miniatures and/or gaming stuff in it. Some people talk about their hobby time ending when they get married. I'm looking forward to having time for it once again once all the wedding work is done!
Posted by ZeroTwentythree at 12:02 AM 4 comments: