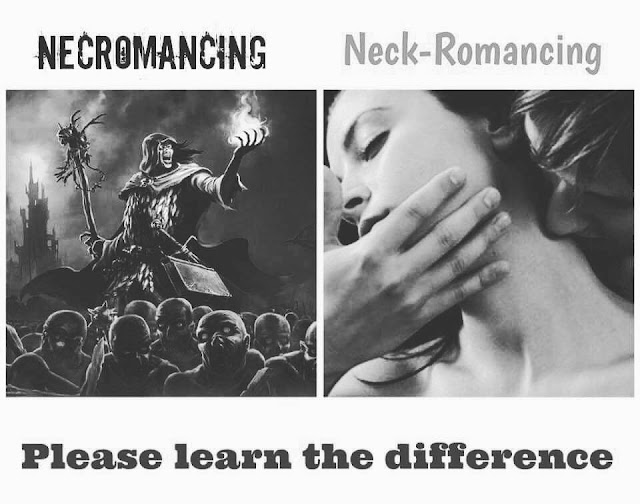 Posted by ZeroTwentythree at 1:32 AM 4 comments: 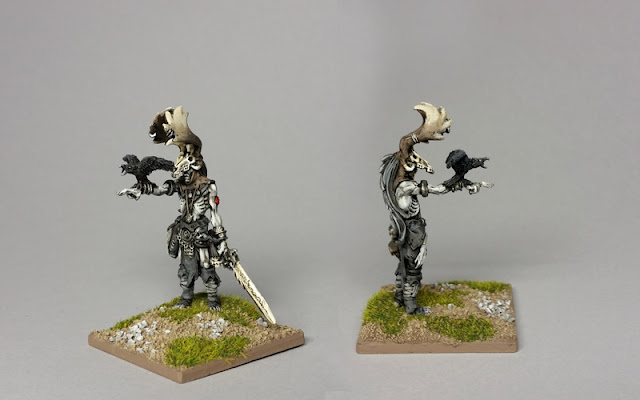 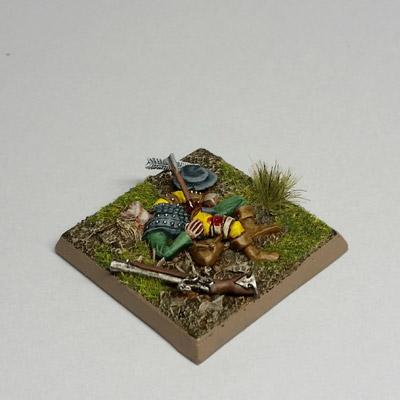 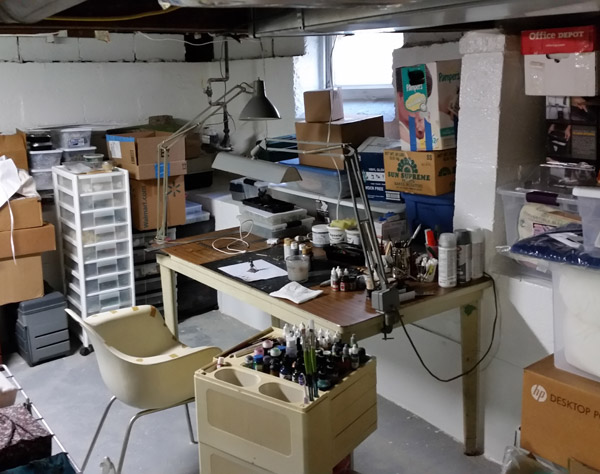 Posted by ZeroTwentythree at 9:17 PM 8 comments:

I only had a few specific expectations for 2016, and given how things are looking at the end of the year (or start of 2017, as I am writing this on New Year Day) I'd say it was a pretty good painting and gaming year -- at least within the context of recent years!

I started off the year by completing a few units that I had intended to do for Deadcember '15 but never had time for: some "skeletal guard" (old GW wights) and non-human skeletons (beastman, orc, skaven, etc.) The "herohammer" era wights hadn't even been on my radar, but I got them as part of a trade and ended up developing a fondness for them.

2016 also saw the start of another tangent project that I've become really excited about: Fomorians. One of the best things about this was that it was a good excuse to try a little bit of resin casting -- something I had been wanting to do for years. In hindsight, I think I could have done a much better job sculpting heads, and I've learned a good deal about the practical experience of mold making & casting, both from my own trials and from the invaluable advice of several people around various forums and social media. Plus the project gave me a good reason to work on some other, accessory figures -- monsters & such. One of my favorite minis from 2016 was the Reaper Bones Frog/Bog Demon. The Fomorian (and Fimir) project has definitely been a fun one, and I look forward to more in 2017.

Earlier in the year I was pretty optimistic about doing some gaming -- still focusing on remote or solo gaming. So I spent some time doing some "wet" Terrain (first wave, second wave), roads (white stone, muddy road) and rough hedges/shrubbery. Very happy with the results, but unfortunately that's all in storage at the moment -- including the table itself. 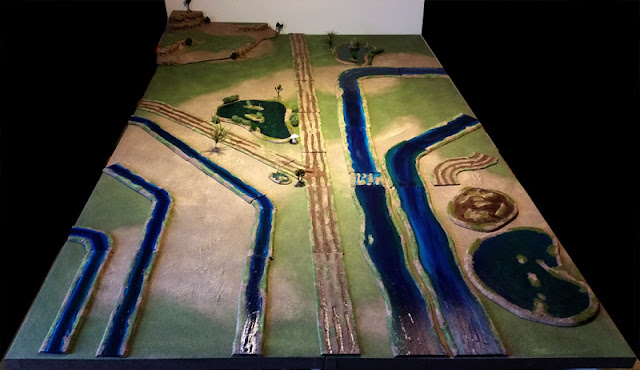 The reason for the lack of table is an unexpected move to a new house with extremely limited options for gaming space. So that's put a major roadblock in the way of my solo gaming plans.

BUT, on a more positive note, I did do more in-person gaming with friends than I have in a very long time. Two days of multiple games of Kings of War with old friends -- a game which I am now a big fan of. Plus I traveled to the Oldhammer Day USA with another old friend, and got in some great oldschool gaming and finally met some "internet friends" in-person. I really hope I can manage more gaming -- local and otherwise -- in 2017! 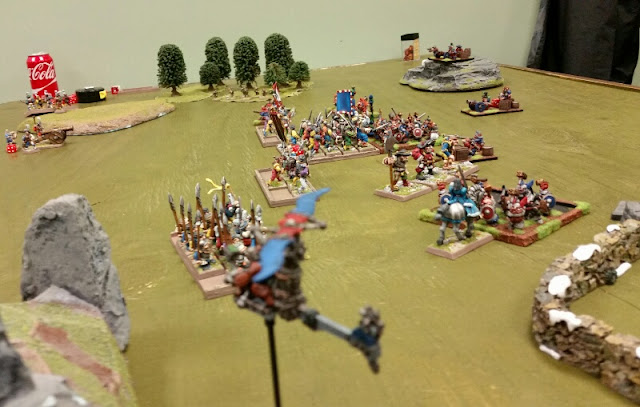 One of my other tangential projects, which actually saw use in a game at the Oldhammer Day, was my giant collection. 2016 was a big year (heh heh heh...) for GIANTS. I dedicated my April painting time to painting a few of them (and was very pleased with the results!) and I also managed to pick up an already (beautifully) painted Black Scorpion giant -- one of two "wish list" giants I acquired this year! I also had some fun making giant stat cards for the Oldhammer day (as well as a 3rd ed. style army list for the Empire army.) 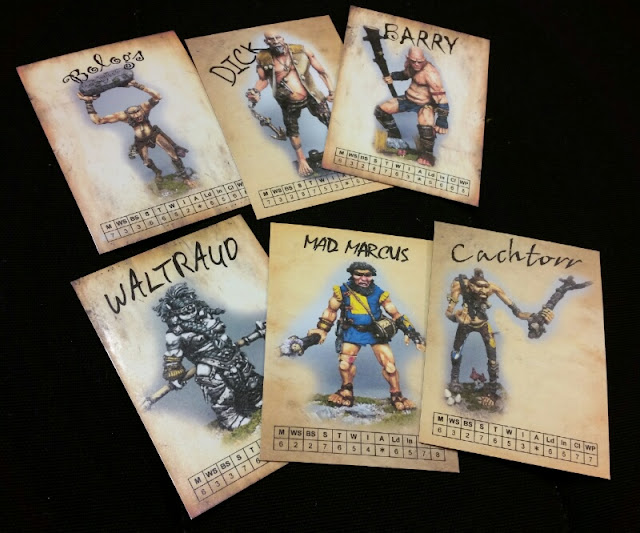 There are also a lot of smaller awesome hobby moments from 2016 -- the 'shrooms from DeafNala (via the LAF,) finishing some old Marauder dwarfs, writing out some of my narrative campaign materials, finally painting some Empire halberdiers (I still need more!), and the Westfalia Fantasy Kickstarter....

Which brings me to my Looking Forward to 2017 bit:

I'll start with the good news/bad news part. I started a new job in December. That is, overall, a good thing. I am back to working in architecture, with what seems like a great company filled with great people so far, and a lot of room to grow. But it was a difficult choice. I already miss my previous work, as well as some of the flexibility it gave me. Finding time for gaming & painting has been difficult for years. It's going to be a bit harder now. I'm working longer hours, travelling, and still having to keep up with everything else.

But I'm still looking forward to trying to make time for some hobby stuff. I'd like to plan for some more gaming days/weekends this year. So I hope to make it to my old gaming clubs regular Game Days (was just bad timing this year) as well as meeting up for an Oldhammer event or two again. I had recently started to recruit a friend into trying some miniature gaming, but there's been a lot going on in both of our lives the past few months. So maybe 2017...?

Painting & modelling projects in 2017? I have a three specific things in mind: The first is to continue experimenting with Fomorians, and have enough to put on the table for some gaming. The second is a second round of Giants. Maybe I make April my giant month again. My April Fool's project, I suppose. I have a few left that I'd really like to paint. Third on my 2017 list is Hobbits. Halflings. Halfmen. Whatever. The Westflaia halfmen are some of my favorite recent figures, and although it's yet another tangential project, they're a good fit for combining as a sub-group of my Marienbug army. The Kickstarter reward arrived in the later part of the year, and I'm looking forward to painting them up this year! 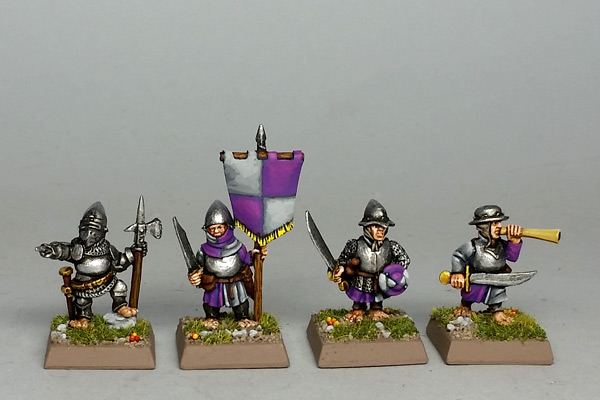 Less specifically, a few things I'd like to do in 2017 are more sculpting, and possibly put together a small Rogue Trader/sci-fi warband. I previously mentioned Robot Pirates, which I still love. But the arrival of the Time Robbers figures has me thinking of a Spacetime Bandits warband as another option. Remember that battle scene vs. Evil near the end of the film? I'm thinking something like that in 28mm.


EDIT: Also, I had a pretty awesome Deadcember 2016. Didn't finish everything I wanted, but got some great painting done!
Posted by ZeroTwentythree at 2:17 PM 2 comments: