Still unpacking & such at home. Took a photo of the painted portion of my Marienburg army -- not all of which is really Empire-by-the-book. (I think I could field about 6000 points in the current rules.)

It got me thinking about the WFB of my youth. My friends and I used to get together over Christmas/winter break and play a giant multi-day game of WFB, trying to put as much of our armies on the table at once. We still used a pre-determined points limit. We also had some really basic scenario rules (usually just an objective, centered around capturing Santa Claus and his sleigh of goodies.) This was way back in the days of 3rd edition.

At any rate... thinking about a big game now. Bigger than what's pictured in the above image. Need to get back to painting!

Posted by ZeroTwentythree at 1:59 AM 4 comments:

More Planes, Empire 8th, and the Paint Comes Out

Time is still a scarce commodity in the Twentythree household, but I've squeaked in a little hobby time.

I finally broke down and picked up the new(ish) army book. Haven't done more than flip through it, though I've read quite a bit on the internets since its publication. I don't expect too many surprises. But I'm planning on playing my first WFB games in at least a year in August (maybe before?) So I figured I'd better get in on the new Empire action.

While I was at The Local Game Store, I thought I'd take a look around. They had the Warlord Games Macedonians (and Greeks), about which I'm very curious. However since they were priced at $8 more than regular retail, I passed. I'd prefer to support local stores, but not at inflated prices, especially when mail order or convention show discounted prices would be a good $14 less.

I unpacked my work space and modeling supplies, but still had many of the paints packed away in boxes somewhere. After spending weeks doing nothing but unpacking, cleaning, etc. I wanted to kick back and relax a bit. So I built a couple more WWI planes.

First is a Roden Pfalz D.III. The Pfalz is a beautiful plane -- sexy like an Albatross. Unfortunately this kit was difficult to work with, had a lot of flash, and my patience just wasn't up to dealing with it very well. So this ended up being one of the uglier assembly jobs I've done. I do place a lot of that blame on the kit, though. Also annoyed that there was no pilot included. I've looked around and think I found a box of pilots that I will order in the near(ish) future. 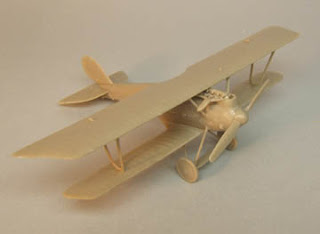 Next was a Revell SPAD XIII. A very nice plane, but in a different (less sexy) way than the German planes. Much easier kit to put together, and the end result is much better. I also appreciate the inclusion of a pilot. 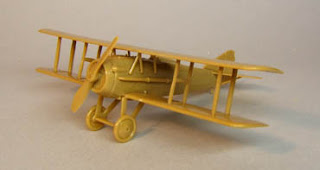 I still have to do the rigging for both of these, plus three of the previously assembled planes. I should get back to painting them as well! Plus the planes that have already been painted still need decals as well.


Paint on the Horizon

I finally unpacked the paint. What got me to do it was the upcoming figure exchanges. There are two in my future.

One is the "admission price" for Grover's Grillin' Cheesefest, which is the local/BREWS summer cookout and outdoor gaming extravaganza hosted by Grover/Mike. I'm still trying to make up my mind what to paint for this. The first year I did a "blind box" -- well, actually two. The guy who drew my name had to pick Box A or Box B, without knowing what he got. As it turned out, he got Repanse turned into a standard bearer. The next year I brought the other box, which contained the old, long OOP Night Goblin "giving the bird," which is honstly one of my favorite classic figures. I may do another blind choice this year, but label to two boxes "Good" and "Evil."

The other exchange is the annual Warhammer-Empire.com "Pleasant Surprises" figure exchange. I did a bit of converting/modeling for this a couple days ago, and just started painting tonight.  I didn't get very far yet, and need to step away from the computer and get back to work! I am very excited about this, because I had a couple of ho-hum ideas before coming up with one I really liked and jumped right into!

Other projects on the desk are to (finally) clear out some of the figures that I should have painted for other people long ago. This would include some High Elf spearmen to augment those I previously painted on commission, Lothar von Richthofen's DR.1, which I built quite a while ago but still need to paint, and my own unit of alternative demigryph models... Chevaliers l'Eléphant. I'm still working on the modeling & sculpting -- they should look much more fearsome when I'm done! 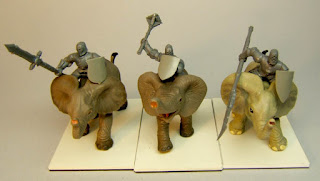 Posted by ZeroTwentythree at 12:53 AM 3 comments: