I experimentally put together some more Oathmark humans. Ten total so far. I mixed in some Citadel bits on half of them (mostly heads). I tried out the advice in the replies from the last entry. I ended up cutting the bases completely off because it was fairly clean & easy. I went with the Citadel beveled bases because they then fit pretty cleanly on those, and also I'm out of my home-made bases and don't have the patience to wait to cut them. ;) But the Citadel bases also help give a little extra height to the minis.

At any rate, the bits mostly mixed well (just a little neck trimming) and they rank up better than I had thought they would! I'm thinking if I pick up a second box, I can field two regiments of 25 melee troops, plus 10 archers. A good core for a small bandit/rebel/militia/whatever force. 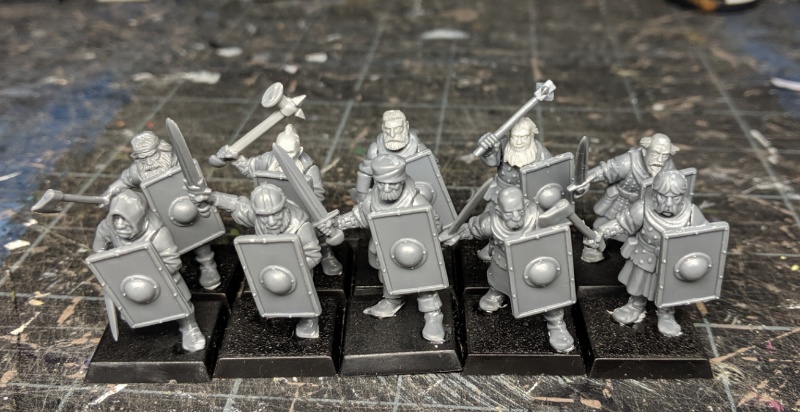 Posted by ZeroTwentythree at 2:37 AM 2 comments:

I assembled one of the Oathmark humans to see how it scaled up next to the GW/Citadel Empire soldiers & militia kits. They won't be mixed in regiments, so close enough for me!

Still not sure they will fit on 20mm bases. I can trim the integral base down (or completely off) to make individual figures fit, but I'm not certain they'll rank up in a regiment. Especially once their shields are glued on.

Anyone have any basing experience with these guys? 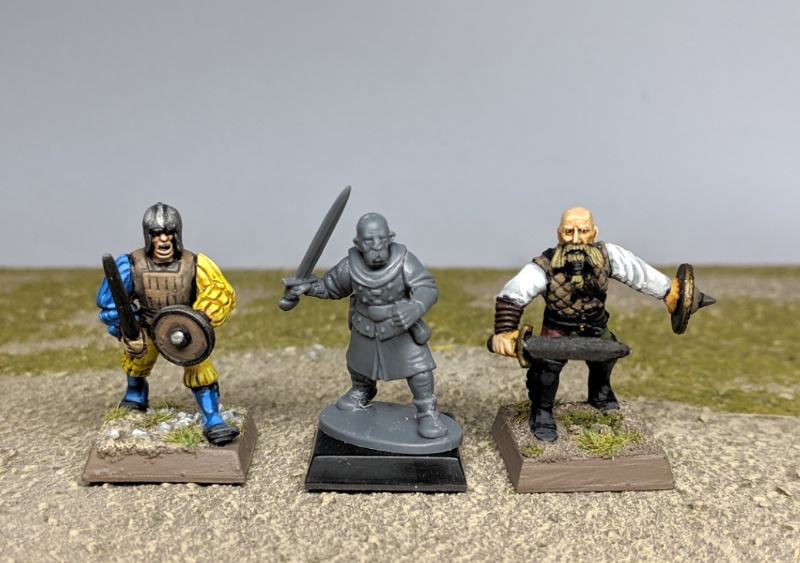 Posted by ZeroTwentythree at 5:47 PM 4 comments:

Stole away some bits of time the past few weeks to paint nine hobbity scouts. Just finished the bases tonight. The leader (who has a wonderful Brotherhood of the Wolf look to him) and the Reaper hobbit on the far right were painted previously. Also painted a tiny hawk from Reaper as well.

I need a new photo setup...
Posted by ZeroTwentythree at 2:35 AM 2 comments:

July's been a slow hobby month. Work continues to be busy, and we had a death in the family that's hit me pretty hard. Plus trying to fit in some summertime fun/events. 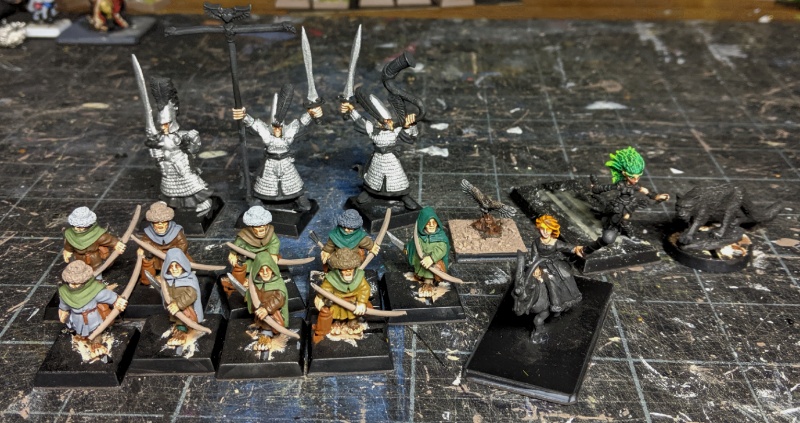 I'm currently blocking out colors on three command figures to supplement the recent OWAC Sea Elves as well as some hobbit scouts. Also starting on two hobbit characters -- one will represent a somewhat upper class mage, the other a wild nature based mage/shaman.

As a reward to myself for finishing the OWAC, I added back to the "unpainted" side of the equation and bought a box of Oathmark humans. I've been wanting some more rough/irregular types to use as bandits or rural Wasteland militia or rebels, or even just  medium mercenary troops. They look good. The figures appear a little shorter than the older Citadel Empire plastics (a few shown for comparison). But they are still pretty bulky and it looks like the Citadel Soldiers of the Empire and Militia heads will look good on the bodies (and vise-versa). The Perry WotR plastics (not in pic) look thinner all around and I think the heads may, unfortunately, not be as good a mix. 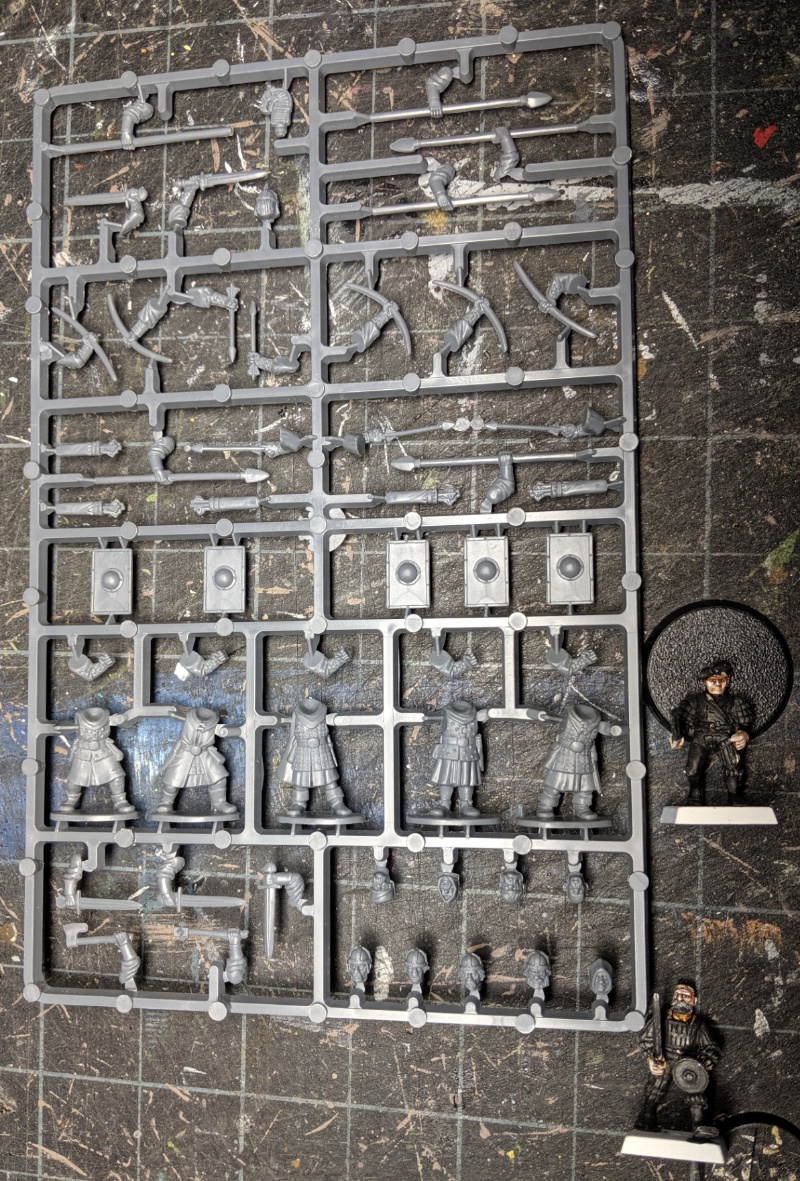 One potential problem, I'm not sure these will fit well on 20mm square bases. So I'm considering two options -- either multi-basing, as I did with the plastic Skeletons, or just switching to 25mm square bases for these. The latter works in the context of one of the conventions among WAB (and other games) players, in which lighter troops are considered as fighter in less dense formations, thus wider bases. Depending on the rules system this could impact their fighting capabilities due to the "footprint" of the figures. Other games it may not make a difference.

I'm thinking some of the Perry Agincourt mounted knights, with some minor conversion work, may make good heavy cavalry counterparts for these infantry. Maybe a bit more like restless "younger sons" from Bretonnia, or mercenaries.

Posted by ZeroTwentythree at 12:02 AM No comments:

More words and photos at the OWAC page:   https://oldworldarmychallenge.blogspot.com/2019/07/zerotwentythrees-june-sea-elves-316-pts.html 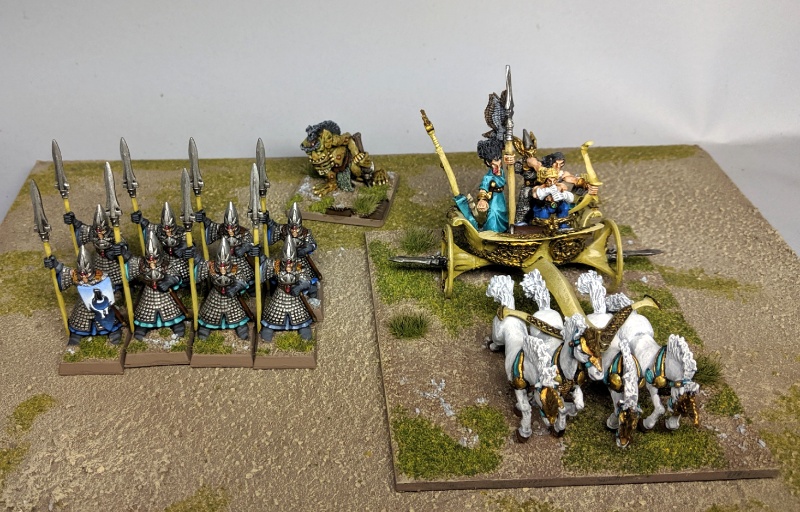 Posted by ZeroTwentythree at 11:53 PM 2 comments:

After painting rank & file, trolls and giants for so long, I feel like a change of pace. 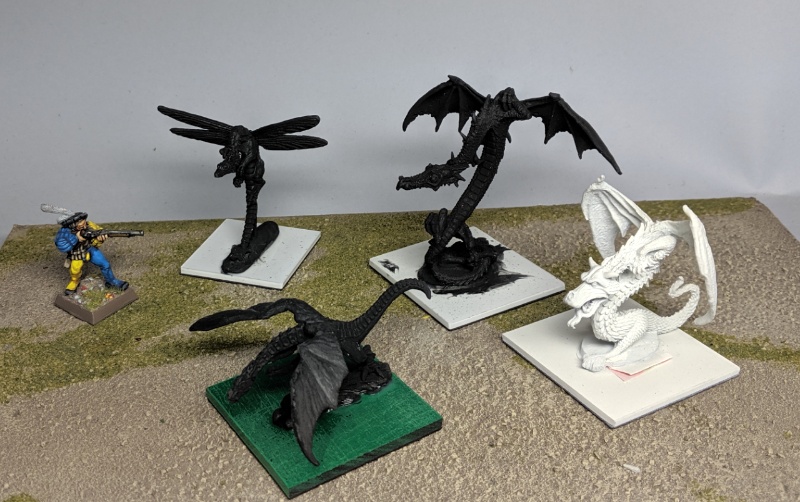 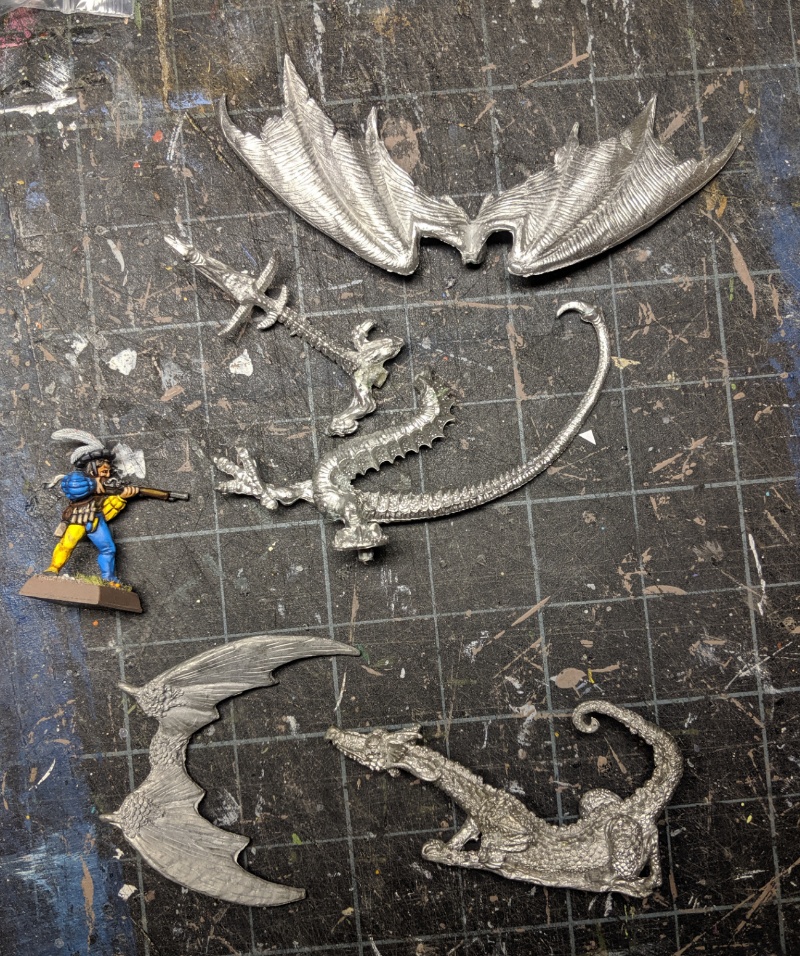 I've also got an old RP frost dragon somewhere, as well as the RP shadow dragon who, unfortunately, could not support the weight of his own wings and sagged until it finally broke from metal fatigue. I keep thinking about making it into land-dragons...

Posted by ZeroTwentythree at 1:35 AM 2 comments: