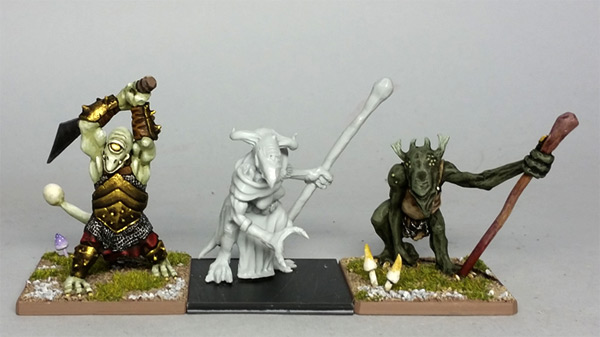 Posted by ZeroTwentythree at 1:16 AM 2 comments:

I am looking to create a bunch of movement trays soon to help encourage me to finally get this solo gaming experiment off the ground. I hate making movement trays. It's tedious. But it's less tedious than dealing with units of individual figures every time you move them, game after game.

My recent switch to multi-bases is a good solution that would help me avoid needing trays... except I still have all of these old single based figures I also want to use. So new movement trays it is.

I don't recall if I published this diagram here before. This is my old method of basing, trays, and transport/storage boxes. All magnetized to avoid damage, and also make it easy to pull out full units of figures at the time of gaming. I used to hate spending a half hour arranging figures into units before a game. 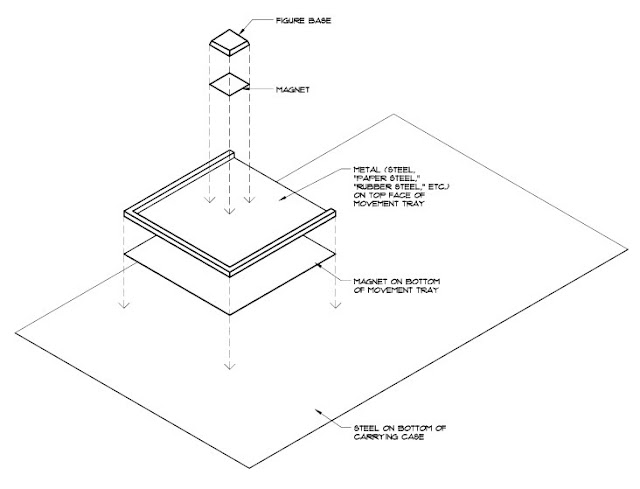 The steel I use is galvanized steel from the hardware store. It's usually with the HVAC duct parts. It can be cut with a pair of snips or robust scissors. I use it in the bottom my my carrying boxes, and used to use it on old movement trays.

But then I discovered "ferrous rubber" or "magnetic receptive rubber."  Easier to work with and store. It's available from various sources. I think I first bought some from the Gale Force Nine booth at a convention long ago. But I've discovered I can get that as well as magnetic sheet direct from a local supplier for far less.

My movement trays are cut from either matte-board or chipboard from the art store, or polystyrene sheet, and if I add a"lip" or outer edge, that's either basswood or polystyrene.

Posted by ZeroTwentythree at 12:35 AM 4 comments:


We had some nice weather this week, so I went outside to cut up a piece of hardboard I've had waiting around for years.

I have separate bases with reeds & other greenery -- and will need to make some more -- that will go on top of these. Similar concept to having woods with separate, movable trees to accommodate troops moving through the terrain.

I would also like to make some more river sections. I've been dying to make decent river terrain for... decades. These turned out pretty good. But I ran out of hardboard. The new problem I am facing is that none of the hardware stores carries it in the same thickness anymore! I could only find 1/8" and this appears to be 1/4" (maybe nominal 3/16"?)

Maybe I can get some better photos when it's daylight.
Posted by ZeroTwentythree at 8:11 PM No comments:


I finished up the painting on the Marauder giant, but can't decide what to do for the base. While I give that a bit of thought, I've started on the next giant -- the Ultraforge giant.

He's the largest giant I've got. Pretty well sculpted, though not as nicely cast as the Marauder or Warploque giants. He required the most clean-up of the four I'm attempting to paint this month, and there are still some visible mold lines/slips. The resin is lightweight, which is a nice change from awkwardly handling the lead Marauder giant while painting.

The big guy is mostly flesh surfaces, so I'm trying to keep that interesting. I put a bit of work into that tonight, but still have more refinement & clean-up. His face still looks a bit like raw meat. (Not that that's entirely a bad thing...) The colors aren't quite coming through in the pics, but I hope they give a good idea where it's going. 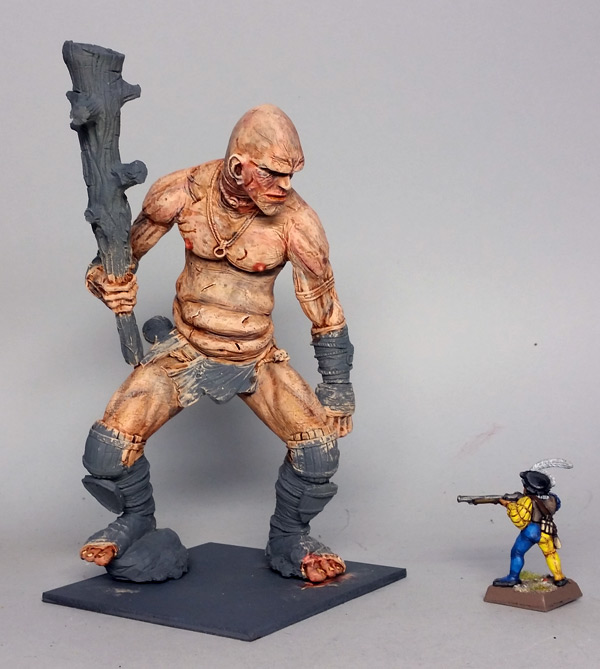 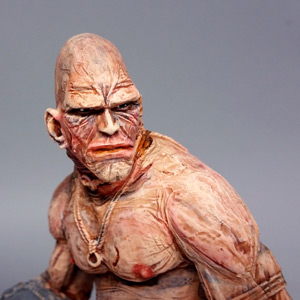 Posted by ZeroTwentythree at 1:00 AM 2 comments:

It was a busy weekend, but the weather was beautiful and our family spent a bit of time outside doing some "Spring cleaning." I also did a bit of overdue sanding and spraying outdoors before bringing in one of my mid-life-crisis projects back indoors for the evening to dry completely. 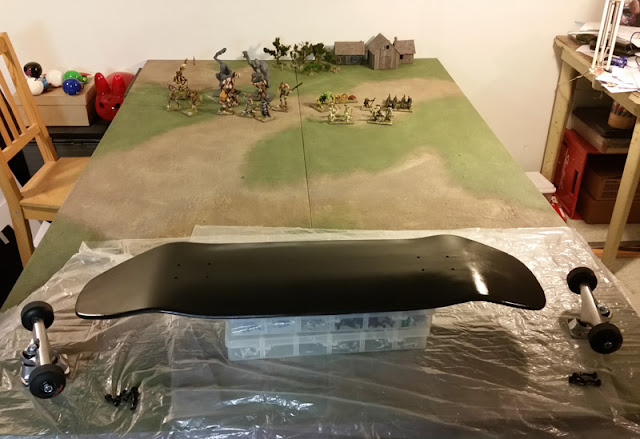 Our fifth wedding anniversary was this past Autumn. I had been talking -- like any 40-something in his right mind -- about a skateboard, and the traditional fifth anniversary gift is wood, so.... my wife got me a gift card for the local skate shop. I picked up the deck & hardware I wanted, but had planned on stripping & repainting the deck. I had been planning on painting something interesting on it, but figured that would drag the process out for another year, so instead I dug out some cans of metallic black I've had sitting around for years and started laying down some primer & finish coats and will keep it simple. It'll just get scraped up anyway. Mind you, I haven't been on a skateboard in over twenty years. But I did ride & kick around a bit before the weather turned cold for Winter, and I survived without injury. So the hardware goes back on tomorrow and we'll see if I can avoid breaking anything. Bones, I mean. I have far more confidence in my ability to put a skateboard back together.

I am up late tonight, trying to catch up a bit of the Marauder giant, and he's finally coming together. I did take a few shortcuts. I would guess about 90% of the painting is done. Refining a number of areas, details, etc. and then on to the base. 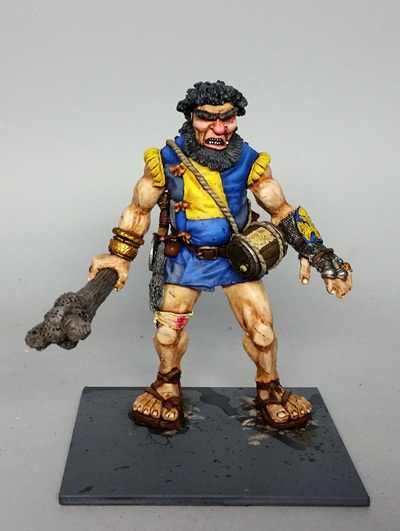 I had started writing up some background for him, but didn't like the way it sounded. So I will get back to that at some point.

Posted by ZeroTwentythree at 2:26 AM 2 comments:

I made a bit of progress on the Marauder giant. Although the photo doesn't show it, I'm happy with some of the subtle colors on the flesh. That was something I wanted to try out a bit before tackling the Ultraforge giant, which is a bit more fleshy. In 2D painting, I've used a lot more color on flesh. I'd like to see how I can incorporate that into larger figures.

I'm stuck trying to decide whether to go with the typical rag-tag look of randomly stitched together fabrics for his clothes, or whether to do something slightly more "coordinated." The clothing has obviously been tailored in some way (look at the shoulders!) and he's also wearing giant-sized jewelry that someone presumably had to create. So maybe the clothing was (roughly) made to order. Maybe he's a giant with some degree of mercenary success and an ambition to flaunt his wealth like the other mercenaries. 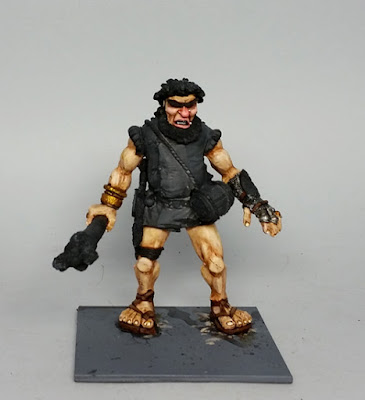 I've been thinking about counters. Wound counters, nerve counters, etc. I've been using small skull beads and other tokens for a while, but since the games I'm currently interested in have larger numbers to track, I'm thinking about counters that will blend in. So I'm considering building some DIY dials, with the top made to look like casualties from my various armies.

A very rough sketch shown below, using pre-cut wood discs and a bit of dowel I may be able to make my own dials. Today's experiment ended poorly, however, as my hand drill had troubles staying on center. What I need is a drill press, and then to make a jig to hold the discs in place. But I don't think that's practical in terms of space or expense, so I'm now considering alternative designs. Maybe rectangular markers with a round disc like the option on the left would be better? 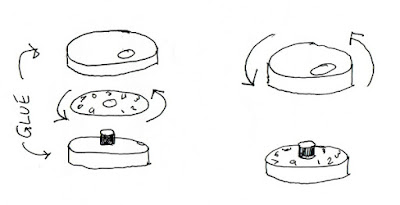 So, frustrated with both giant fashion design, and wound/nerve tracking dial engineering, I stuck with painting some vampires for commission/trade...

Posted by ZeroTwentythree at 2:57 AM 3 comments:


I went with the easy one first. Maybe it's for the sense of accomplishment -- first giant done by the end of the first week. Mostly done. I still might make a few touch-ups. 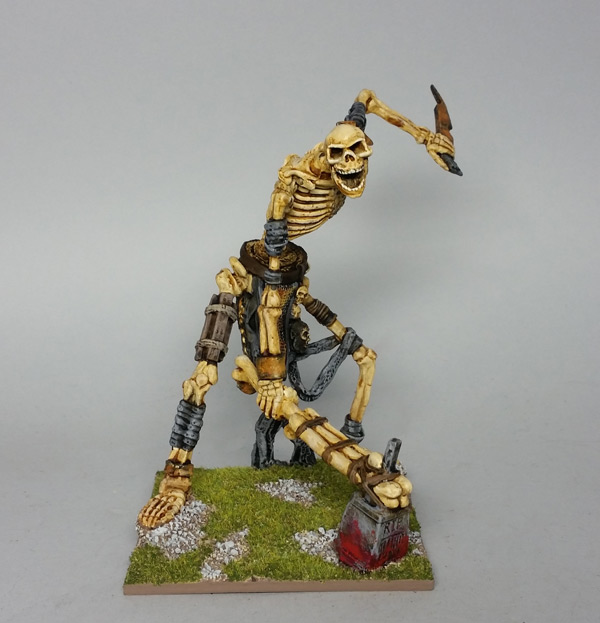 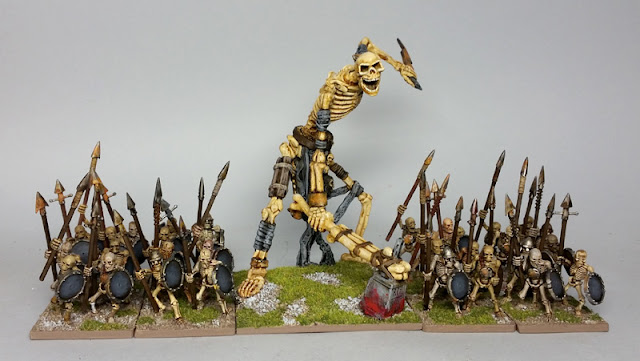 Anyone who's played WFB (and a few other games) should be familiar with the idea of a "fallen giant" and it's potential impact (haha) in the game. GW has even previously released a 3D plastic fallen giant template, to help graphically determine how many potential casualties one may cause.

I have barely started painting the first of my Big April Challenge giants. I'm starting with the Marauder Giant, and the Colossal Skeleton, if you're curious. The former is photographed below. 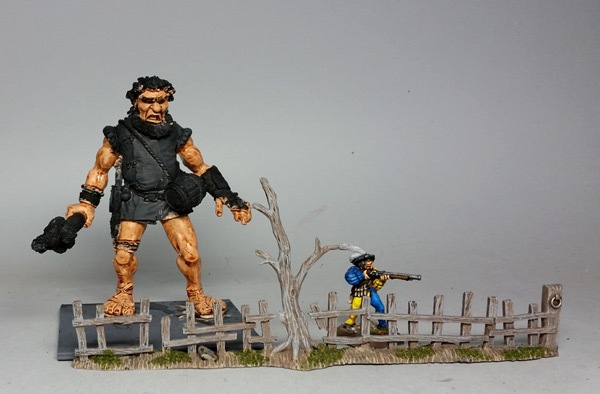 I photographed him with a section of fence, and my usual scale reference model. Obviously, I get the idea of a giant stumbling or collapsing dead onto a tightly formed unit of troops. But I started thinking... what then? Most of the time, in game terms, the body just disappears. But that's a hell of an obstacle.

I've already been on the hunt for this cheap(ish) vinyl toy for other purposes, but I think it will also serve well as the basis for a fallen giant marker/terrain.

I see if I can get one of their dragons, or similar, when there is a good sale/coupon. I still need to locate the cyclops -- all of the stores around here have been out of stock on that one for as long as I've been looking, and they seem to have an irregular restock policy.

Posted by ZeroTwentythree at 12:44 AM No comments:

Behold! The Power of Veggies!

Broccoli Walkoli... Menace or ally? Sentient chaos vegetation, or nature fighting back? Who can tell... 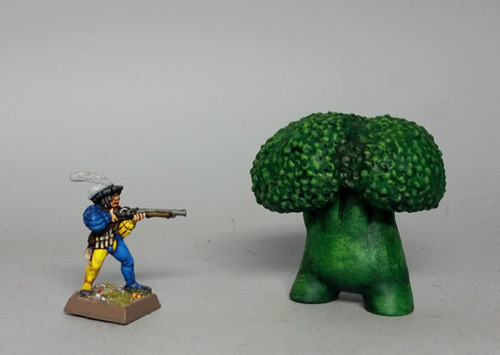 Posted by ZeroTwentythree at 11:13 PM 2 comments:

I enjoyed the March painting challenge, and although I didn't actually paint anything, the idea of Deadcember was one I could get behind if I had any time.

So April... I'm just making this one up, since I can't really work "giants" into any amusing wordplay involving a month, nor does anything come to mind for a good April theme, other than the Fellowship of the Ring ("Fly you fools!") -- which I don't have any plans for. So giants it is. This may be a one man Big April Challenge. 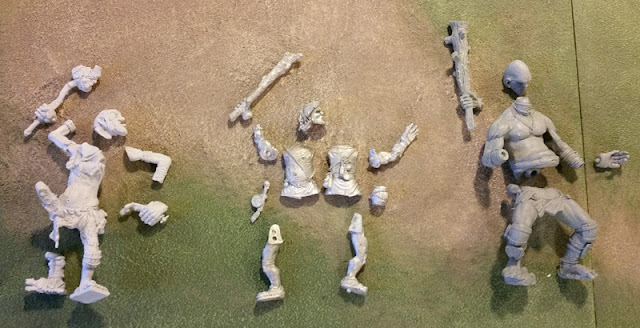 I just spent a bit of time cleaning my favored victims subjects. From left to right, Warploque, Marauder, and Ultraforge.

I didn't expect to have any spare time this weekend, so getting to work on these was a pleasant surprise. It looks like I may have another spare hour or two, so I may either clean up the Reaper Colossal Skeleton as well and/or start assembling these.


Edit: Got them assembled, still need to do a bit of gap filling & patching though. 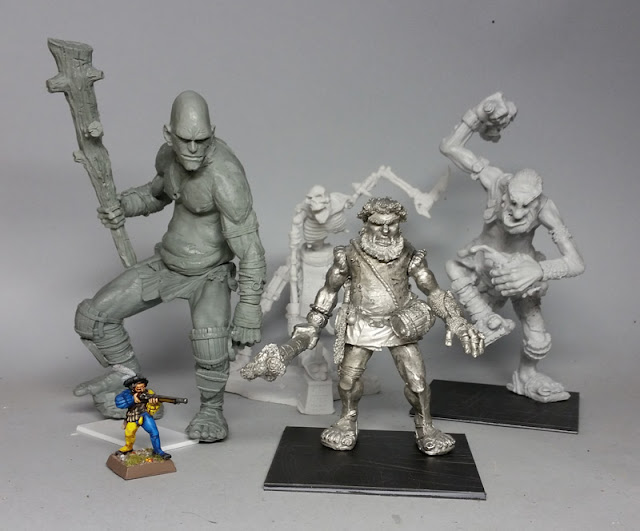 Posted by ZeroTwentythree at 8:28 PM 3 comments: