I've started a whole bunch of various figures, but I haven't finished much at all. Here's what the latest. The remainder of my Bugundian crossbow, and one of the last few gendarmes I had around the painting room. 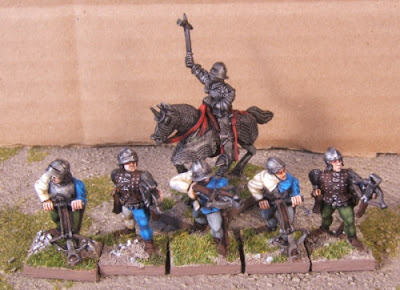 As far as medievals go, I've almost caught up with my supply of figures. I've got a few more cavalry, 10 more archers (started), and about 30 halberdiers and 30 more low countries pike. I think I may actually hold at those numbers once I've finished. I'm tempted to switch to HYW era Burgundians (Jean sans Peur!) rather than continuing to expand the Ordonnance era army (for now.)

But this got me thinking about the now cliche wargaming expression that when you run out of unpainted figures, you die.

I've been doing pretty well with that. At one point I was that typical wargamer who could survive a nuclear blast in my room lined with lead (figures.) But over the years I've sold off a lot of that and have been trying to avoid the urges to buy ridiculous amounts of figures I'll never hope to paint.

Still, I've got a few purchases in mind, provided I'm still employed next week, or the week after... The WF Celts are finally out, plus I'd like one more box of their Romans in the near future. And Crusader Miniatures has a variety of Spanish & Numidian figures that have been calling to me... "buy us... paint us... we promise to roll 6s for you..." All of this will most likely wait til Cold Wars, since it's just a few weeks away and I'm wary of doing any more mail ordering at this point. :/

Posted by ZeroTwentythree at 2:55 PM No comments:

I finished the 20 man Gallic warband from (what I've recieved of) my Black Tree Designs order. I'd really like to expand this with 5-10 more figures, but since these figures only showed up after I complained a month after my account was charged, and it's now going on two and a half months and I still haven't recieved the other half of my order, nor replies to my emails, I think I'll just have to hope to find some other manufacturer's figures that will fit with the scale and look of BTD.

The figures themselves are OK. A little blocky or angular on the details, but not as bad as some of the Old Glory figures. Not as clean as the Foundry or Warlord Celts. I've recently painted. The faces are good, and the the poses are nice other than one or two on which it was difficult to put the shield because of the position of the spear. All the spears were integral, by the way. That's something I'm not normally fond of, but it worked quite well on these figures. They were thick enough to be sturdy, but not so much that they looked like telelphone poles. Best of all, that meant less time gluing figures together.

I think I just wasn't in the mood to paint them or something, and I did rush a bit. I don't think they're up to my usual standards. I've based them up but still have to finish some of the sheild details. 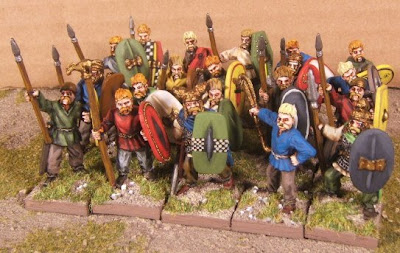 I got the figures as part of a bargain deal BTD is offering. They end up around $1/figures, but the figure selection is random, so out of 40 figures I ended up with the 20 above, 8 slingers and 12 casualties & civilians. So really, only about 28 "useful" figures out of 40. Considering that's competing with Warlord's figures and the recent "Renegade Regiment" deals, combined with BTD's apparent unreliable service, I'm not sure I'll beplacing any more orders with them. As it was this order was to "test the waters" for precisely that reason, and they've failed to deliver. (Literally.)

I've started about 4 other groups of figures, not certain which I will finish next. Among the contenders are a second unit of WF Romans, more Foundry Germans, and some Front Rank crossbow and archers. Stay tuned...
Posted by ZeroTwentythree at 9:48 PM 1 comment:

I posted this elsewhere, but thought I'd share it here. Its a couple of photos showing layering as a method of highlighting. I don't normally use layering exclusively, but it's easy to show in still photos. Actually, I lie - I did wash/glaze in one step in the third pic. I did have to rush a bit to keep the camera batteries from dying and the paint from drying on the palette, so excuse a bit of the slop.

The photos show 4-6 layers. This takes it to a little bit of an extra stage beyond the common 3-layer style many people use. The trade off is that the highlights are a little more smooth, but it of course takes twice as long to paint an army. Also, the more layers you use, the more important it is to keep the paints thin so you don't glop the figures up or get brush texture showing.

Click the photos below to enlarge them. They show three stages, white, blue and then buff leather. 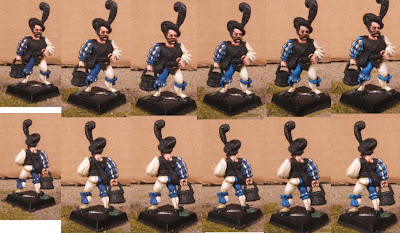 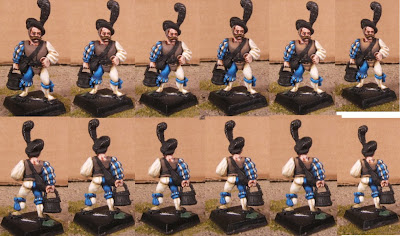 Posted by ZeroTwentythree at 9:59 PM No comments:

I ordered some sculpting armatures from eBob Miniatures and they made it from the UK to Cleveland in about a week at most. A small order, but it was very quick service!

Perhaps the title above is a bit misleading -- I'm not comparing eBob to barbarians. ;)

But below is a comparison shot of some various Celts & Germans that I've currently got:

As I get some more, I will take new photos. I'm still waiting on: BTD Germans & Renegade Celts (on order) and Wargames Factory Celts (waiting for release.) I'm open to other recommendations. Does anyone else make Early Germans?
Posted by ZeroTwentythree at 2:14 PM 2 comments:

Since this topic came up on the WAB Forum, I thought I'd say something about it here...

Anyone who wants to make comments, criticism, advice, whatever can freely do so in responses. I''m a big kid, I'm open to different perspectives and comments from a different point of view. I'm not neccesarily soliciting comments, but anyone who feels like commenting can speak their mind without fear of offending me.

I also appreciate honesty. When I review the sculpting/manufacturing of the figures I've painted here, I try to do the same. I don't say I like something unless I honestly do, and when I make critical comments I'm not trying to be insulting or offensive. That's just how it I see things, and although I try to stay as honest as possible, everyone should understand that opinions are subjective. So I appreciate all the same from others. I wouldn't post pics of my painting (or conversions, sculpting, whatever) unless I was open to receiving the same. So anyone who feels like saying they

As a courtesy, I do appreciate comments to be made here or in places that I've personally visited & posted the pics, and especially prefer comments to be made on my original photos and not something that's been resized and/or altered and reposted elsewhere by a third party. That's happened a couple times lately and when people start making incorrect speculations and assumptions about my intentions & techniques, it just makes them look like idiots. But this is the internets, and I can't keep control over all my pics, nor the idiots.

Email ThisBlogThis!Share to TwitterShare to FacebookShare to Pinterest
Labels: Painting

Looks like I'm bailing out of BASHcon's WFB tournament on Feb 21 unless I can find a way out there. I've made it the past two years and had a good time. I was hoping to bring the Marienburgers this time around (I ran skaven the last two years.)

The second weekend of March I'll be at Cold Wars in Lancaster. So far my only plan is to play in the WAB tournament. I'm hoping there will be a medieval division as there was at Historicon. I don't have enough classical figures done to play in the doubles, and it's my understanding that medievals aren't allowed in the doubles tournament.

*If anyone is interested in some non-tournament WAB (especially medievals) let me know. I'd like to set up something informal/friendly.

Since I will be at Cold Wars, I will obviously not be attending the Marauders Mayhem spring event in Dayton, as it is the same weekend.

Adepticon is the first weekend of April. I had wanted to attend and play in the WAB event(s) both for my own enjoyment and to encourage the event to continue & grow. But right now with my employment being on shakey ground because of the languishing economy, I'm not sure I can spend the money. There might be a slim chance if I can find a cheap way out (carpool?) and a place to crash (track down old friends in town?)

In the middle of May is the second Recess Rumble. I'll have to see how much I can revamp my Empire army in time for this.

At least that's the more formal events. There's a couple small, local things going on with both WFB & WAB.
Posted by ZeroTwentythree at 12:48 PM 2 comments:

Finished a group of Wargames Foundry ancient Germans. I'm calling them javelin armed skrimishers right now, but I'm basing them on the same 20x20 bases as the warriors so they are interchangeable.

Don't know if I need to say much about these figures. They're great. Some may seem a little cartoony, but they paint up so easy, are posed pretty naturally and dynamically, and simply look good. The nice big soft/rounded folds in the cloth help with the quick painting and keep the figures looking detailed at a distance.

My chief issue with Foundry is, of course, price. They are affordable when you get some sort of deal (like the holiday deal that I missed out on and now regret.) But if I just one day decide to place an order (without waiting 6 months or a year for the next "deal" to come along) then they're a bit beyond my budget, especially compared to the alternatives.

I do wish someone else would do some nice Early Germans, though. There aren't enough companies doing this range.

I've still got some more to paint, but not nearly as many as I need. (Yes, need.) So in the meantime, I'm hoping to find some more Foundry Germans on eBay, Bartertown or at Cold Wars.
Posted by ZeroTwentythree at 8:48 AM No comments:

I've already finished 8 of the Black Tree Design (BTD) Celts. I may have rushed them a little. I'm not entirely happy with my painting.

The figures are OK. They're huge compared to just about everything else I've got, except maybe the Mystery Gaul (who I'm pretty sure is a Gripping Beast figure, at this point). I'll post a comparison pic soon. I'd like to paint some regular BTD Gallic infantry first, though.

The slingers (which is all I've painted so far) were a little chunky (not the smoothest sculpts) and a couple had odd facial expressions. A couple of the buckler hands had some excess metal (worn molds?) But not bad figures, either.

I had ordered 2 bags of their sample pack deal things (20 figures each) and got 8 slingers, 8 casualties, 4 druid & captives, 4 command, and 16 various spear armed warriors. Due to some tweaking of their prices, these are even cheaper now than when I ordered.

I might be tempted to place a small order to round this group off, except for two things holding me back at the moment... First is that I may want to do the same thing when I see what I get from their Early German deal. Second, and tied to the first, is that I still haven't recieved the Early Germans that were part of that same order.
Posted by ZeroTwentythree at 9:33 AM No comments: