When I made some of the maps for the Warhammer-Empire.com campaigns, I joked around calling myself Map-O-Tron. I enjoy making maps, and have missed doing watercolors in general. I'm feeling the itch again. Not sure that time will cooperate with me, but we'll see. Plus my mind has been wandering with the idea of fleshing a campaign setting further. (Related to the OMFG site I started putting together.)

I'm waffling again. I started with the idea of an alternate Warhammer setting. (Hence 1/2 the reason for using the term "Althammer.") At one point, I was on board to completely toss the Warhammer setting entirely, since I want to do away with a lot of the baggage that comes with it. But then I went back, and now... well... still not sure. Maybe I will do an AltMapHammer. Below is the Warhammer area I'm working with, along with the alternate map I toyed with previously. The big question is which way to go... 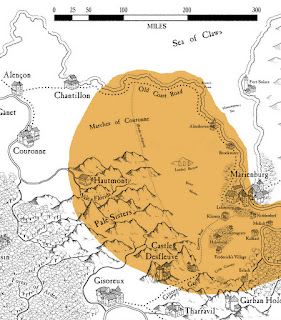 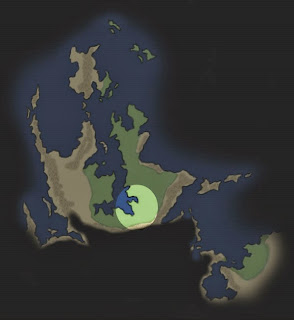 The thing about the "Alt" is that my ideas really feel stuck dead center between the actual Warhammer setting, and my own ideas. I think part of the reason I retreated to the Old World rather than a unique setting is that I was trying to build the entire world at once. Still, I'd probably recycle a lot of the 'hammer stuff. Maybe I just need to let go of that and focus on the local region, and keep the remainder pretty vague.

In either case, I want to start putting things down on a map. At least in rough form. Maybe more...

Posted by ZeroTwentythree at 11:03 PM No comments:

The Goods. (Well, more of The Goods.)

From WizKids. Turned out better than I expected! Definitely going for that camp, and it looks like they have more crates, wagons, and other useful stuff for the Jackrabbit Trading Company's caravan.
Posted by ZeroTwentythree at 4:36 PM No comments:

As mentioned previously, I picked up a copy of Dragon Rampant. 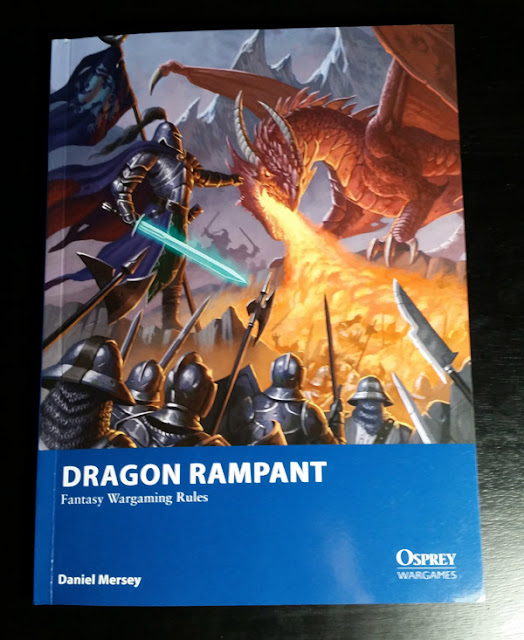 I've been curious about Lion Rampant and Dragon Rampant since they came out, especially since they seem to remain popular with a certain set of wargamers. As I was looking for reviews, I found I could order it from Target, of all places, and have it delivered for about $12. So I figured I may as well just pick it up and see for myself.

Having freshly read through the rules yesterday, but not played a game yet, I've got a few initial impressions. I'd like to actually try a game or two before really forming a solid opinion.

The game appears to be a large scale skirmish. Figures are 1:1, but in small groups or individuals. There are no formations, flanks, or complex maneuvers to be performed. Just measure, move, attack, etc. Attacks, damage, etc. are taken per unit, though. I imagine that gameplay is more or less the same whether you field 10 units or 10 individuals.

Army building is fairly open. Choose from a list of unit types and add optional abilities to fine tune a unit. Each unit type & ability has a point value, allowing points based armies.

One thing that strikes me as odd is the Battered status. When your unit fails their morale and becomes Battered, it's more like being "pinned" and frozen in place than fleeing.

I've previously pondered whether Kings of War would be a good "gateway wargame" to get friends into wargaming for the first time, but after reading through Dragon Rampant, it seems like a much more accessible first time game. Not that KoW is complex, but DR doesn't deal with advantages of maneuver, and special rules are largely modifiers to the rather simple core mechanics. That said, I can see Dragon Rampant as a fun "beer & pretzels" game, but I'm not certain how well it would satisfy my desire for more complex (yet still streamlined & elegant) games.

As I said, it's worth playing a few games to find out. I just need to work out some time and opponent(s)...


Posted by ZeroTwentythree at 1:53 PM 2 comments:


It's been a busy week. I was on the road for work, the first time in a while. I worked my ass off so I would have time for a little personal time for a side trip to visit some missiles & spy planes. 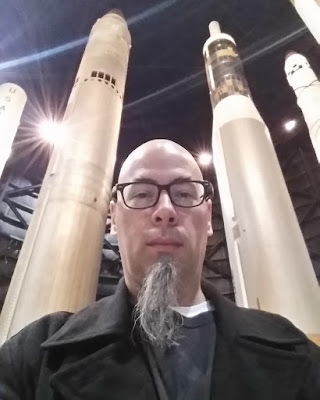 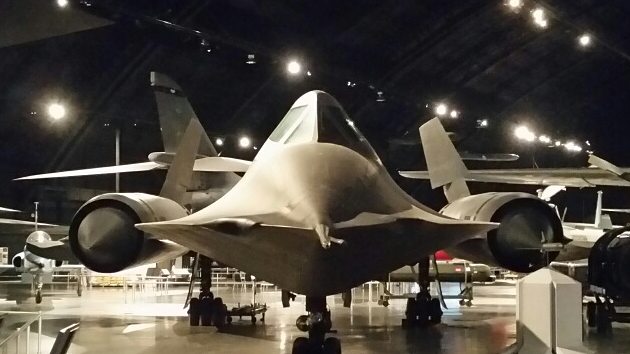 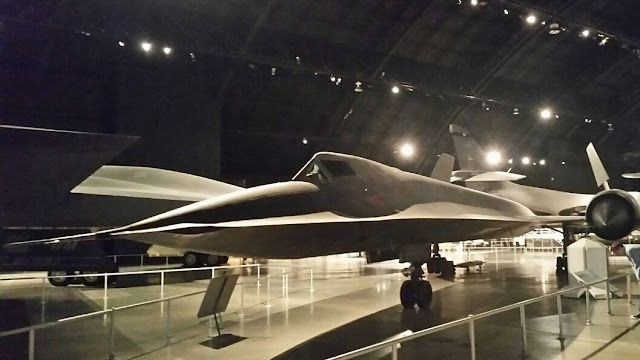 I had been wanting to go back & spend more time at the Air Force Museum at Wright-Patterson AFB, but my plans haven't panned out. But since I was in the neighborhood (I was working just a few miles away!) I managed a little side-trip before heading home.

At this point, they've added an entirely new building, which was really cool as it offered a nice display of experimental, space, and presidential aircraft. They even offer walk-throughs of several generations of the latter. I may post more photos later.

Speaking of my trip, I was also working in the same strip of shops as a Games Workshop store. In spite of playing their games & painting their minis since the mid to late '80s, and even getting the grand tour of the Baltimore HQ, working a table at Games Day, etc. I've never been in an actual GW store. I felt like I should go in, but didn't really have any good reason to -- other than the "never been" excuse. But that turned out to be good enough. The store was nice, and the guy working there was friendly and helpful. In fact, I felt kind of bad not buying anything, since he answered a lot of my questions about their newer games.

Back home now, a bit tired and I ended up working on a pile of housework all day. But I just snuck off to the basement for a bit of painting time. 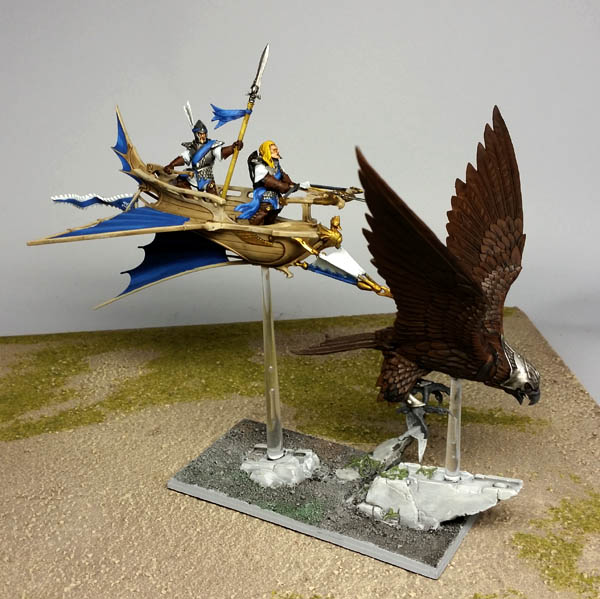 Finished the first of two High Elf Sky Cutters for a friend. Well, it still needs snow on the base. So, like 99% done. The other still needs a little work, but is mostly done. 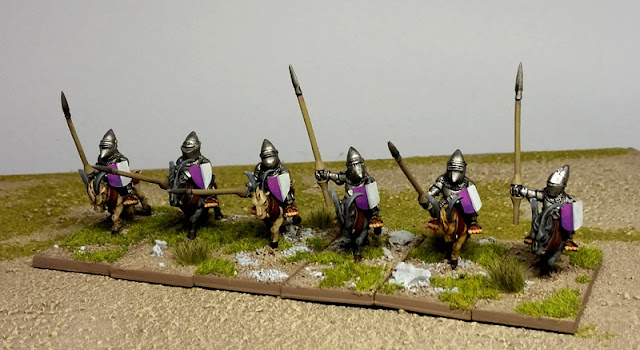 I also painted five more of the hobbit goat knights. Six done, seven more to paint. Trying to come up with a name. Phillip's Lancers is the best I've got so far. (Woulds't thou like to charge deliciously?)

I'm getting anxious about finishing the High Elf commission, and these hobbit goat knights. The past few years I've enjoyed the March/Marsh and Big April themes. But at the rate my 2018 painting is going, these few high elf chariots and handful of hobbit knights will take me through the next month or two. Should I manage it, however, I will aim to paint the bog trolls in Marsh, and I have three BIG giants for April. (OK, one is half painted already -- a left-over from last year.)

And hey, look what arrived in the mail... 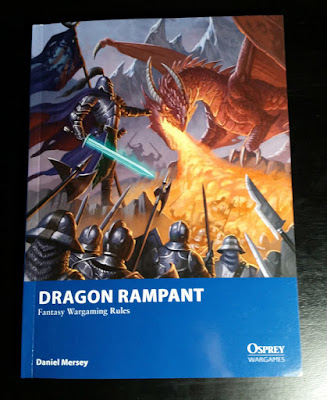 ...I'll write down my initial impressions in a separate blog entry.
Posted by ZeroTwentythree at 11:35 PM 3 comments:

I did evwntually get to prime the trolls before travelling for work this week. You can see the sculpts better now. 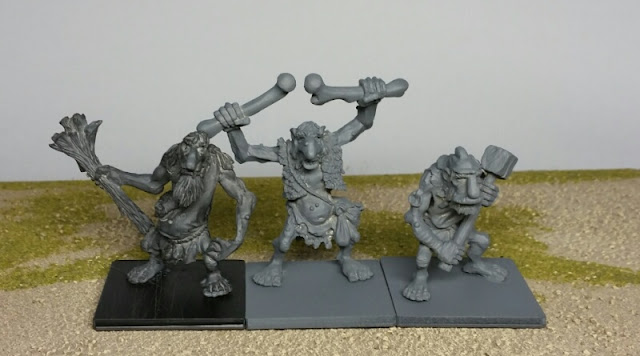 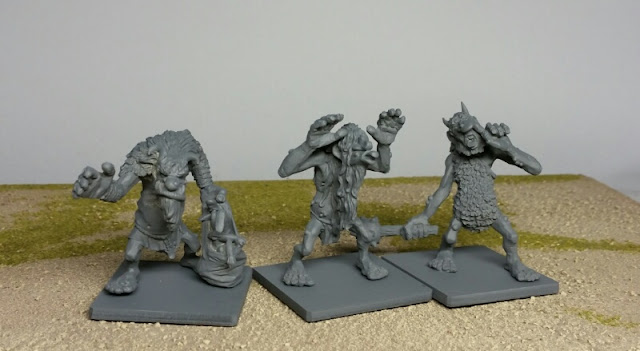 Posted by ZeroTwentythree at 9:00 PM 2 comments:

They didn't really require much clean-up, as they were pretty crisp castings, but I cleaned & assembled the two sets of Drew Williams (Satyr Art Studio) trolls. The weather was nice this weekend, so I thought I would get them primed. But I didn't get them done in time, and the nose-picker still needs a little bit of putty at the elbow joint. Will have to finish prepping them soon.

I plan on painting them with mixed flesh tones, similar to both the half-orcs and giants I've previously painted. This now has me considering stripping and repainting my old Marauder trolls in a similar manner (as well as trying to get the other two in the set.) These were painted a good 25+ years ago. 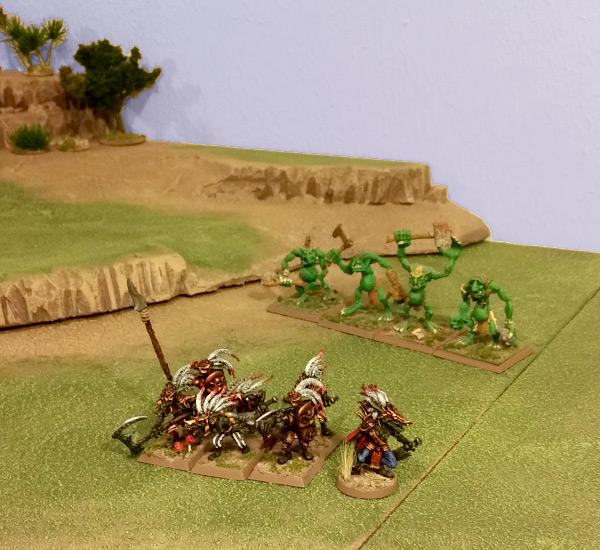 Not much time for painting lately, but did paint up a test mini from the unit of Westfalia goat knights. 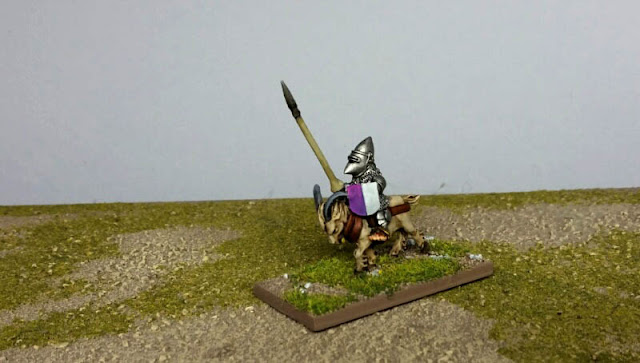 Looking forward to getting some time to work on the rest of them.
Posted by ZeroTwentythree at 7:02 PM 1 comment: 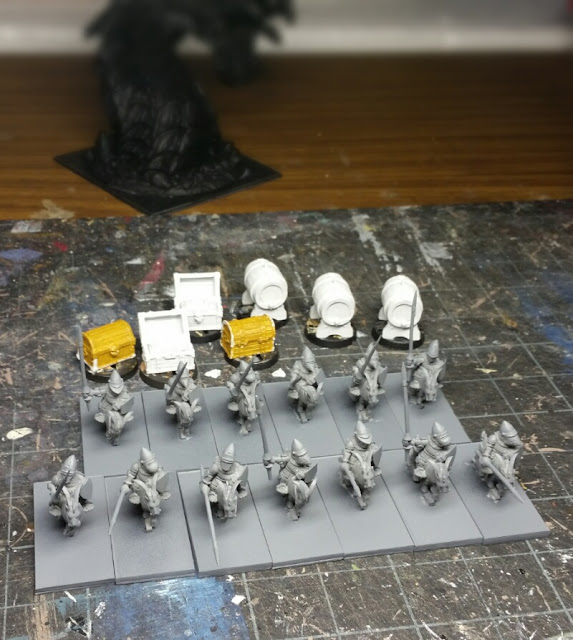 ...the heavy hitters of the Jackrabbit Trading Company, and some more of their goods. The chests and kegs are from WizKids. In spite of the "HD" and "Deep Cuts" labeling on the packaging, the detail is a bit shallow and soft. But the price was good, and I think they will look OK when painted up. I think I also need to go back and buy the adventurers camp for use with the JTC.


Daydreaming about solo gaming again. Measured up my basement and I don't think I can fit my table in. Further daydreaming about building some walls inside our (detached, un-insulated, unconditioned) garage to create a game "room." Unlikely. Getting the no-gaming-blues again.


Posted by ZeroTwentythree at 7:23 PM No comments:


I've decided to start getting organized with some of my fantasy gaming ideas, and will be doing so publicly. The first project is organizing & publishing my ideas for games focused on mercenary units. Thus is born....


So far I've just started laying out the skeleton of the page, listing some mercenary units and filling in background, photos, basic rules, etc. on some of them. A lot more work to come.


As I was working on the OMFG page the past few days, I thought I would dig out some old minis. Apparently Fried (pronounced "Freed"), the half-orc shaman/mycologist... 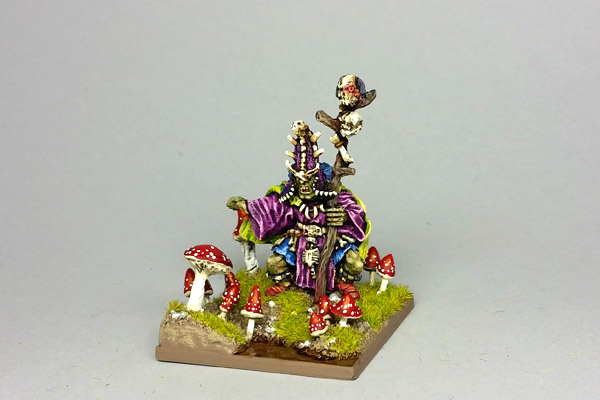 ...may have discovered the secret of animating fungus... 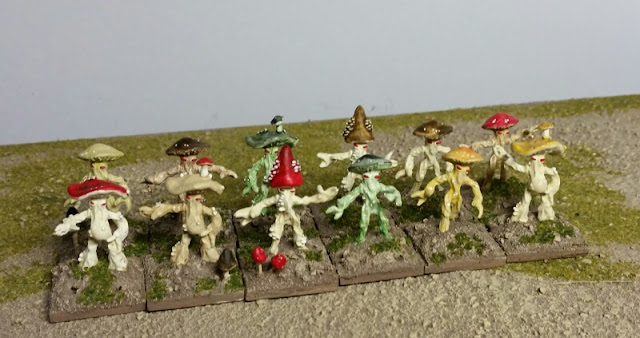 Hallucination of an altered state of mind? Assembling an army of fungamal minions? A bit more about them later.

Posted by ZeroTwentythree at 10:05 PM 2 comments:

Maurice has summoned some more skeletons. 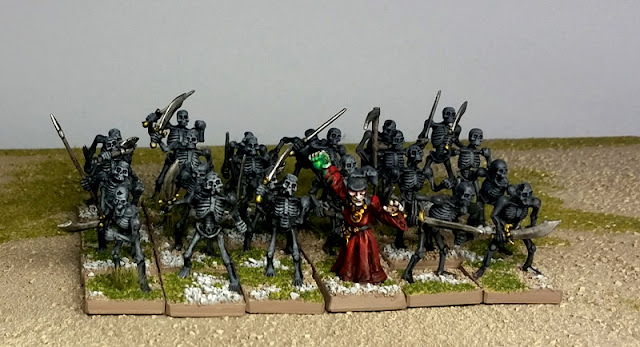 I thought this would be the last of them to be painted, but as I was digging around (unsuccessfully) looking for a old metal skeleton to act as a champion, I came across enough bits to assemble eight more. So the Mo' Death Skeleton Commandos will soon be expanding from 24 to 32. (Or even more if I can find one or two oldschool metal champs that fit with the unit.)
Posted by ZeroTwentythree at 2:33 PM 2 comments:

Krakon Games skeleton ogres. I previously painted the one on the right. I can't seem to get decent photo of these gents to save my life. The two on the left are more recent arrivals from the last KS. 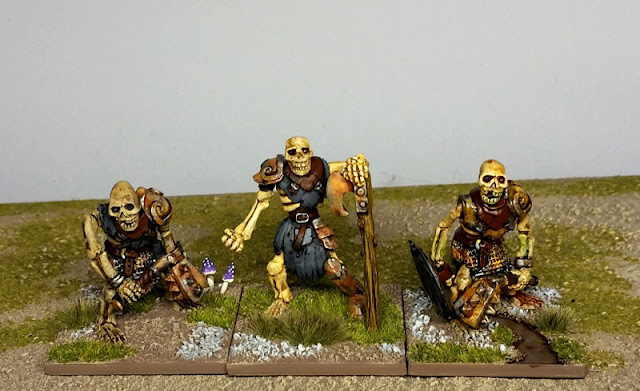 I picked up a duplicate of the one in the middle and plan on converting that one with a different pose/weapon.

For what it's worth, Krakon are becoming another favorite source for unique miniatures. Obviously I like the skeletal ogres, and I've previously posted pics of Morrighu. I really recommend checking out the web site and Facebook page a follow ( https://www.facebook.com/KrakonGames/ ) you'll see some cool minis with a bit of an oldschool flavor.

As much as I've been enjoying my own Fomorian conversions, I'm tempted to put that on hold and pick up some of the Krakon Fomorian raiders, especially since they fit with certain old lead miniatures much better than my own. I had better start saving my pennies...

Posted by ZeroTwentythree at 6:31 PM No comments: