I can't seem to take a clear photo with my phone for days now, so it's a bit blury, but the Meier dragon and two skeletal ogres arrived. I'm dying to start on these right away, but have some other things to work on first. I am also thinking about taking a shot at sculpting the ogres a couple of friends before I paint them. Not saying that I will be successful... but I think I'd like to take a shot at it.

The ogres are a little bigger than the old Golgfags I'm using with the Undeadish, but I'm OK with that. Scale is all over the place in this project, and it still looks OK. The dragon is the perfect size for me. In fact, it's close to the same size as The Caller's mount that I previously painted up. I will post some better pics with other figures for scale at some point.

Also of note, the dragon is in four parts, and they key into each other really well. They need t a bit of filing to get them to fit, but once that's done I shouldn't need to pin the pieces. Very well sculpted. But I suppose that's to be expected. Tom Meier has always been one of the best. 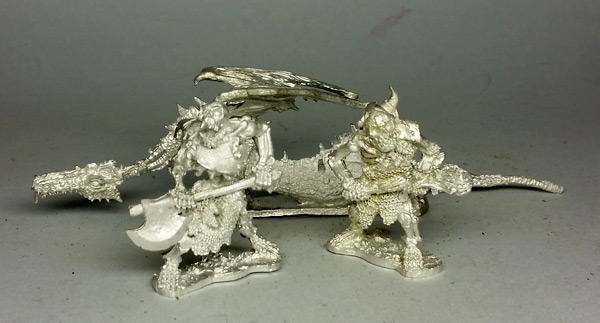 (I just put the dragon together, and it took a bit more work (and will require some filler) than I had anticipated to get the pieces to fit.)


I also stumbled upon one last, and very small, dragon from my old collection. Old enough that I had painted it with enamels! It's a Grenadier figure, and I think it was called a young forest dragon or something along those lines. Smaller than the Meier dragons. I'll get a pic sometime soon.

I finally put some varnish on the table, and to celebrate, I set some terrain and many of the recent figures out on the table. The Undeadish are on the march, coming down from the foothills. A small cottage is in their path... 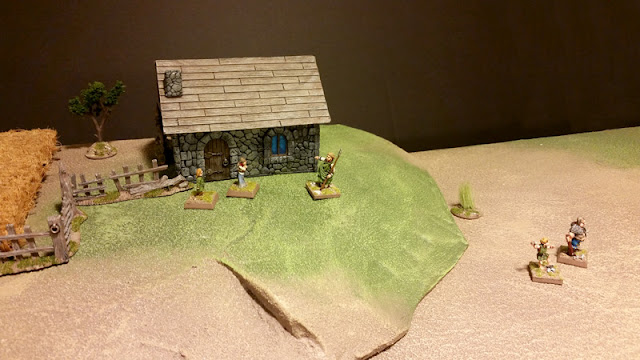 Posted by ZeroTwentythree at 10:38 AM 3 comments:

A very quick paint job on one of the current Citadel plastic chaos knights. I had this single knight left over from other projects & figured I could use him as a leader of some sort. Stuck with the usual color palette. 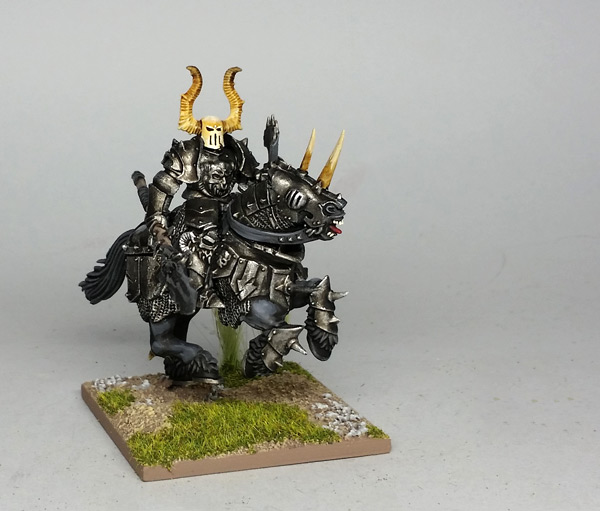 Also, a little behind the scenes photo from when I was painting the horns on his head. I used a few layered washes and hung him (and his magnetic base) upside-down from my light (which is steel.) 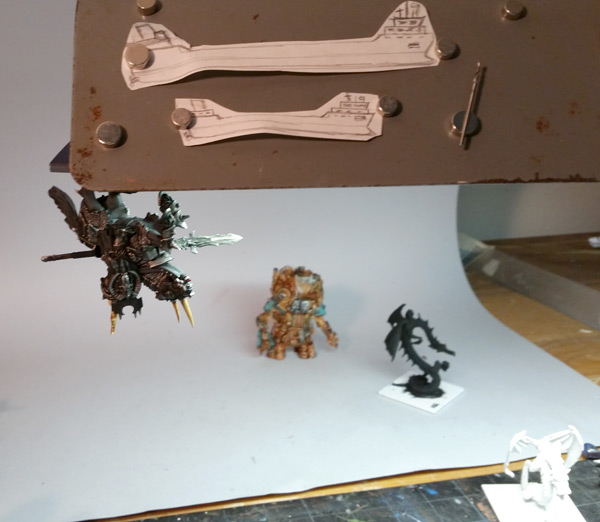 Speaking of my light, I finally replaced the two fluorescent lamps in it. They were probably older than I am. I got the same lamps as I had, but the new ones are so nice and bright!
Posted by ZeroTwentythree at 12:53 AM No comments:

I keep a "wanted" list of miniatures and related items. My budget is extremely small, and I'm trying not to outpace painting too much, so items are only slowly removed from the list. I've recently started feeling nostalgic and have decided that I really need to have two pieces of the past that I honestly can't afford. Unless I find some hidden bargain or manage to arrange some sort of swap for figures or painting services, I'm not sure I will be able to cross these off my list any time soon.

The first is the old Regiments of Renown Nightmare Legion. I had this (painted!) when I was younger and bought minis without much concern for focusing on large armies. I eventually sold or traded it away. But now I am dying to get a set for my current project! 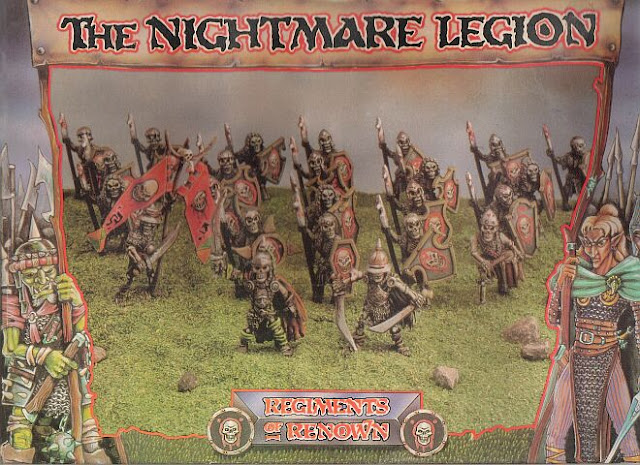 The other item isn't actually miniatures. Long, long, loooong ago I worked in a store and we had a (sealed) copy of Ratspike. I should have bought it. I didn't. I've been thinking about it lately, and would really like to get it. 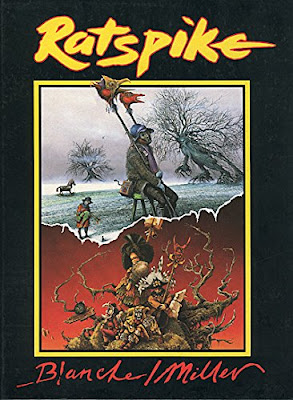 A little behind on posting some of this here, but some more WIP photos of the terrain... 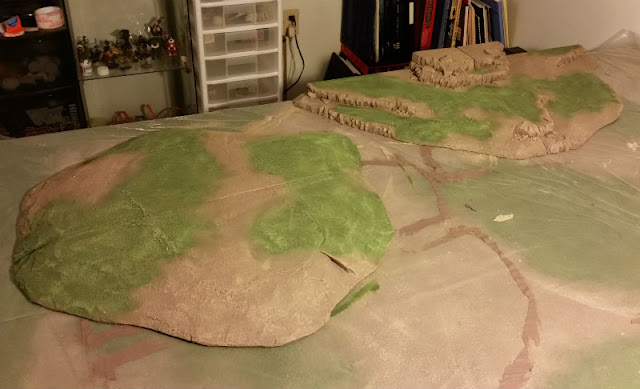 A not terribly clear photo of two of the terrain pieces on the board, with figures for scale.

I am currently working on the little rock formations and a few other bits, and testing out some matte varnish on the big round hill set. If the varnish works, then the hills in the pic and the rest of the table top will get a coat or two. (I have also started painting some figures I owe other people.)

When I set up for the pic above, I wanted to put up a backdrop. So now I am thinking about what I can put together for a better movable backdrop (including how to get it up to the table height from the floor.

Also, although I have not noticed any sagging, I am starting to wonder if I should put another shelf unit for support under the middle of the tabletop -- either perpendicular or parallel to the ones on the end -- either might work OK.

Posted by ZeroTwentythree at 1:39 AM 3 comments:

Slow going, but I did just a few more skeletons. The photo makes them look a bit darker, but they look like they fit with the previous skeletons in real life. 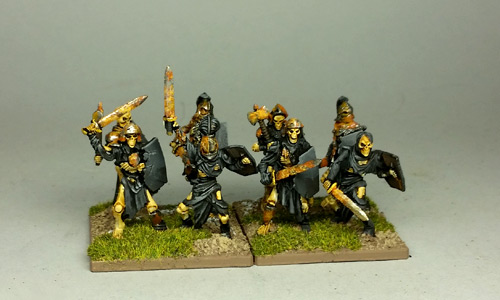 Posted by ZeroTwentythree at 10:31 PM No comments:


I wanted to work on something a little different for a bit. Started working on some hills that can be used separately or be put together in pairs. A bit of trouble with the pink hills warping or "cupping" so that the center of the slops lifts up off the table a bit. I made some rock pillars from some of the scraps. Not exactly what I had pictured in my head. Not really happy with the way the top levels of the 1/4 hills turned out. I'm trying to balance gaming practicality with aesthetics. I'll see how that turns out. 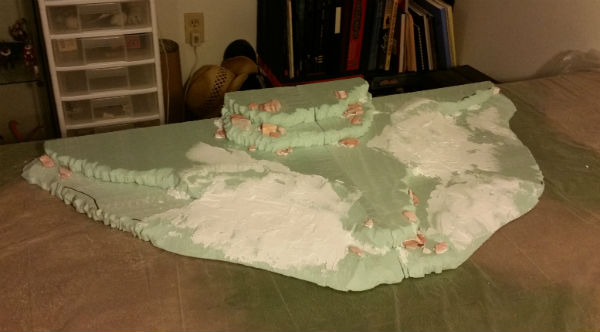 Posted by ZeroTwentythree at 11:43 AM No comments:

I just sold some other gaming stuff, so I'm going to take a small portion of the proceeds and treat myself to one last small addition to the Undead. Still undecided what to do, but here's what's under consideration.


That's roughly in order of my current preference.

My plan is to wrap up the "first wave" of Unead/ish as soon as possible. I think I'm pretty close to having a decent selection to use for small games. (Should I ever get to the point of actual gaming.) My plan is to use them in "units" of 4 bases. In the future that could get scaled up to 6 bases per unit. I may also add in new troops to the mix, depending on how things evolve.

The next stage of painting will be the Marienburg faction. I'm really anxious to start, but still haven't decided on colors, etc. I did make up my mind to follow through with using the 15th century figures for the militia/rural troops and add the existing (and new!) landsknecht "puff & slash" guys later. I've already got most of the figures I will need, but would like to pick up a few boxes of Perry WotR plastics to round things out a bit. The new light cavalry and a box of dismounted knights are at the top of my list.

Posted by ZeroTwentythree at 3:54 PM 3 comments:

I finished up five more bases of Mantic skeletons, and finally based the undeadish ogres (Golgfag v.2.)

I may even "rebrand" this blog with the name. After all these years, it still doesn't have a proper name. I'd like to redesign the layout & graphics anyway. Maybe even come up with a logo...

Posted by ZeroTwentythree at 4:14 PM 4 comments:

As I’ve been painting Undeadish and building a table, I’ve been thinking about a lot of the other aspects of my current project, and that has been evolving a lot.


I had started writing up a list of pros & cons for an alternative road to take with the “good guys” and had planned on posting that publicly. But the act of writing it out convinced me to just go ahead with the alternative.


The “good guys” or the “definitely living according to common definitions of life” are going to take on a slightly different character. Initially, I was simply going to use my WFB Marienburgers, and cling to a lot of the background. Previously I decided to transpose most of the general concepts of the city to my own setting. My thoughts on this have continued to evolve, and I have decided that although Marienburg and the existing army will most likely be a part of the narrative, I am going to start with some new ideas, background, and figures from the ground up.


I think it boils down to a few main reasons. One is that I am really getting into the world building and fictional history creation. (Maybe I will try my hand at writing some actual fiction?) The other is that I would like to construct, paint and base a new army from scratch. I think I can also benefit from narrowing the focus of the setting, background, armies, and map(s).


So I have decided to start my campaign in the rural hinterland, and will be using slightly earlier period figures. As much as I enjoy the landsknecht period & style, I’m also (more?) fond of the late 15th century. I also happen to have some unpainted Perry and Front Rank miniatures to form the basis of the army, left over from my abandoned historical Burgundian army. The new focus will also be far more human-centric.

Behind the scenes I have been writing down some outlines & information regarding the setting, and have plotted out some initial battle scenarios. I will be doing these in “chapters,” and don’t want to get too far ahead of actual games, as I’d like the results of the games to determine the narrative and nature of subsequent battles (and further development of the armies.)


I will share some of these details once they are fleshed out some more. At some point, my long term goal is (ideally) to put together an oldschool “campaign pack” with writing, maps, battles. If I can manage -- and this may be a bit of daydreaming -- I wouldn’t mind creating some illustrations and sculpting a few miniatures to go with the campaign.


For now, I have more undeadish to paint, and now some revised planning to do for their opponents’ figures as well. Since I hate to update without a photo of something, here's what my desk currently looks like. 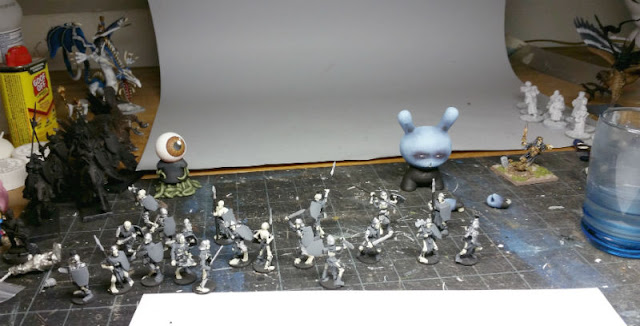 Posted by ZeroTwentythree at 10:43 PM No comments: