Not really any gaming related news to report. Haven't painted figures nor played a game since the Grillfest.

Work and family responsibilities continue to take up most of my time. My daughter is 15 months old now. She's starting to walk, though with some uncertainty. She still crawls about half the time, presumably because she can do so at an amazing speed compared to the toddling about.

When I can squeeze in some late nights I've been back at the vinyl toys. Just opened an online shop, in fact. (Trying to raise money for a new crib and so I can hopefully afford to buy a few Christmas gifts in the next month or so.) I think some of the appealing things about working on them rather than gaming miniatures is that I am 100% free to do whatever my imagination directs me to, and I also don't feel any pressure to reach any goals (unit, army, figures for a game, etc.)

Below are some of the most recent customs I've done. 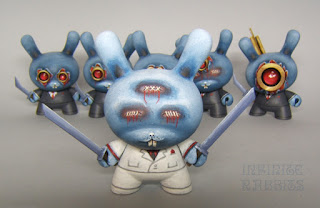 Posted by ZeroTwentythree at 5:31 PM