I've had an idea in the back of my head for a while now. So I finally broke down and built a prototype. It's a swamp dwelling Fomorian. It started off as a Reaper Bones orc, but got a new head, weapon, tail and feet. This is like a "rough draft" figure. If I follow through on doing some more, I would like to add more detail -- especially the tail and weapon. But this gave me a good enough idea of what could be done, and I'm pretty pleased with it.

Here's another photo, before it was finished, showing the scale of the figure next to some other big (and little) guys. 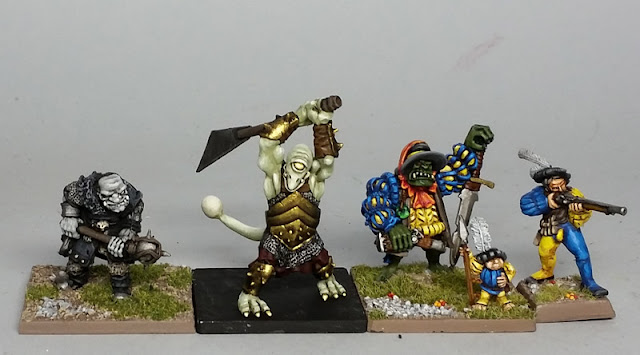 Not only did I have this specific conversion in mind, I also have something in mind for my theoretical Marienburg campaign. More on that later, but for now, an excerpt from "Marienburg: Sold Down the River."


But sometime after the departure of the Elves and the Dwarfs and before the arrival of Man, Chaos and evil came, spreading like a cancer from the north and the south. The Skaven, digging their tunnels like cracks meant to undermine the continent, burst forth from the abandoned mines and ravaged the surface. Within a few decades, the land was a ruin: the herds were slaughtered, the waters poisoned and the groves cut down. Marching like vermin into the north of this realm, they found the Fimir, a race of reptilian giants who themselves were remaking the land in their own blasphemous image.


War was inevitable. For how long it raged, only the Fimir and the Skaven know, and certainly no one is asking them. The Skaven built great castles to hold their conquests, and slowly they pushed the Fimir back. In the end, there came a cataclysm that decimated both sides. Whether it was a last desperate effort by the Fimir, an attempt at final victory by the Skaven, or even a rebellion by the earth itself doesn't matter. Great waves of magic washed over the land and the earth convulsed and cracked. In a night, the castles of the Skaven and the holds of the Fimir were thrown down as the very bedrock heaved, broke and sank. Their armies were destroyed and their minions crushed or swallowed whole. By dawn the next day, only the land itself remained, nearly empty of life and hiding its wounds under a thick blanket of fog.