Rome for the Holidays

My non-denominational winter holiday greeting for the past few years. A Young Ones reference (definition 1), for those too young, old, or un-hip to recognize it. People get so sensitive about what you can safely say in order to wish people well. ;)


I'm working on a couple of things over the holiday, most of which are not my own figures. But I'm trying to sneak in a few for myself.

I canceled my pre-order for the Wargames Factory Celts, but switched to a box of their Romans, partially out of curiosity, partly out of a desire to paint some Romans, partly because I recently finished watching the Rome TV series and have almost wrapped up Caesar's Conquest of Gaul and have already started his Commentaries on the Civil War.

I was impatient with the first unit of 16 figures, so about 20% of the way through the process, I decided to just finish 4 of them entirely to see how they turned out. My impatience was not necessarily a good thing. I was questioning whether the figures were worth finishing. I was actually pleasantly surprised. 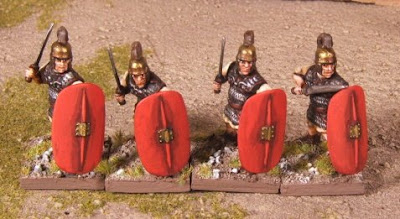 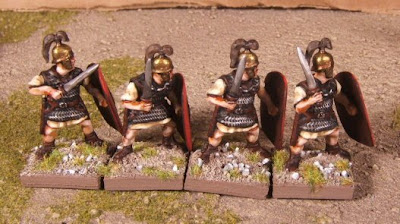 In the beginning... I decided to do a group of 16, including command, armed with gladius. I decided to leave the crests on, and mount them all on individual bases for maximum WAB flexibility. (I'll use move trays -- the bases are magnetized.)

I'd also like to start off my saying that a lot of what I've read in some of the other reviews is pretty much my experience. On the sprue, the figures looked a bit iffy, but the detail popped out a little better after a coat of primer. (I used black.) However, once I started painting I had mixed feelings about the detail... more on this in a minute.

The figures cleaned up quicker than the Warlord figures. The mold lines weren't bad at all. The plastic does seem almost a bit too hard. I like the feel of Warlord and GW plastic a bit better. But this is a bit of a nit-picky detail. Once I clipped & cleaned them, I didn't think about it again.

Having read some of the other reviews, particularly the one at MacPhee's Miniature Men, I wanted to make sure they based up OK. In the end, I didn't have much of a problem. I kept the shields tight (I like to paint with my figures fully assembled from the start), and posed them at a slight angle. Mine actually rank up better than the Warlord Celts, and better than many of the GW figures. (I've got over a hundred of those plastic Skaven and have to make sure they don't get out of order otherwise I'll spend a full evening sorting out the puzzle.) The photos should show that they worked out OK on the 20x20 WAB bases.

On to the painting... I painted these figures the same way I paint almost all other figures. I happen to almost always paint flesh first. So I started off on the wrong foot. One of the most disappointing features on the figures are the faces. The detail is so flat that my usual basecoat, wash and quick 2-3 highlights didn't work out well. I almost had to paint the features on. Considering how little flesh/face is exposed, this seems silly. I just wish the detail would have been more crisp and deep.

From there I went on to the mail and had the opposite experience. I was planning on having similar problems and expected to do some drybrushing, a wash or two and more drybrushing. To be honest, a simple & quick drybrush would have been enough. I went a little extra and added one wash and simple drybrush-highlight in spots. The mail didn't look deep/crisp to the eye, but it was a different story when I hit it with the paint brush.

Most of the rest of the figure was simple and I honestly don't have much to say about it other than they painted up quickly and turned out a bit better than I initially expected (after being disappointed with the faces.) I've read some complaints about the sandals, and I agree that they're not as detailed as some other figures. But to be honest, I preferred being able to just paint them all brown and not worry about tiny slivers of flesh colors showing through individual straps. I feel like I paint a little better than a "tabletop" quality, but I still paint armies, not individual show quality (Golden Daemon, etc.) figures. So I was OK with that level of detail.

There's been some grumbling about proportions, etc. and it largely seems based on a single photo of a single figure, from what I can tell. Having held, assembled and painted the figures, I think that many of the complaints have been overstated. I do agree that the command figures are definitely the weak point to the boxed set (I will get to them in a later review), but the rank and file troops pictured above look pretty decent. Especially considering the price of about 60 cents per figure.

Compared to Old Glory (in general -- I haven't painted their Ceasarian Romans), I'd take the Wargames Factory. The assembly time is probably a wash (considering OG mold lines & flash), the detail is softer but cleaner, and I prefer the poses and expressions. Compared to some of the "premium" UK lead (Foundry, etc.) they certainly don't look as good, but they're almost 1/4 the price, you don't have to screw around with lead dust from filing/flashing the metal. Most proportion issues are a trade off, since even the "premium" figures have some issues in that department. Compared to the Warlord Celts, I've got to admit there are some differences in expectations because of the type of troops. Overall, though, I thought the detail on the Warlord figures was better (more crisp). On the Celts, I expected more variety, but this wasn't an issue with the more uniform Romans. But I did prefer the more natural poses on the WF Romans to the twisted & gyrating WG Celts. Because of the different nature of the two types of troops, though, some comparisons are difficult.

Although I had some issues with the figures, I'm pleasantly surprised as far as the rank & file are concerned. Hopefully they'll sort out some of the problem spots (crispness & depth of detail) in future products.