I forgot to take starting pics of the game, so here's a bit of an in progress shot. I also forgot to indicate that Karl Frank and Lucy (his dragon) are in the midst of the enemy in this pic. 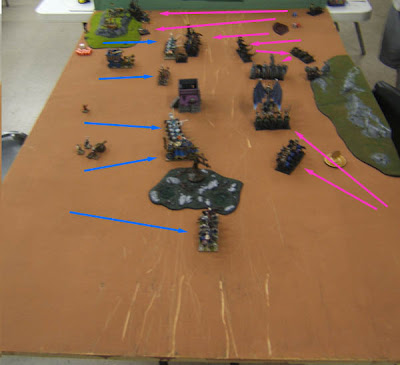 My opponent was the ringer Warriors of Chaos army, which had massacred its Dark Elf opponent in the first round.


Right out of the gate I had horrible luck with my cannons and did nothing the first two turns. That allowed all of his fast troops to take out two of the cannons and jump all over my line.

I moved many of my troops up, some as bait to try to draw in some charge material for the STanks. Unfortunately, he set everything up on one side of the table, most of which went down after I had deployed my entire army. So I did have to spend a few turns "redeploying" and sending one STank on a bit of the "scenic route" to combat. 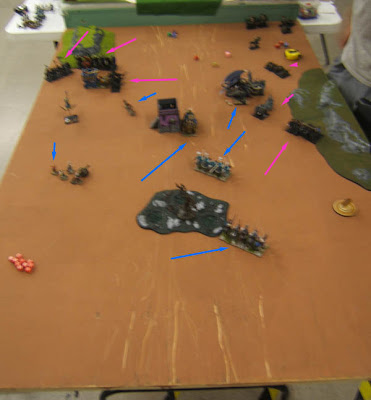 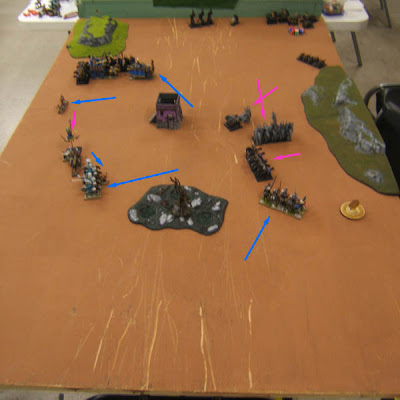 My militia charged the dragon ogres but failed to break them. ;) Here you can see everything in the distance converging on one of the Steam Tanks.

You will also notice a distinct lack of Karl Franz. After completely missing (again!) the Nurgle Lord for two turns his dragon finally finished the lord off. However, I still managed to lose combat due to numbers and banners. Needing a 9 or less to stick around, Karl rolled 11 and ran... but nor very fast. Only about 6" on three dice. So he got run down by the pursuing knights.

The marauder cavalry dance around a bit and annoy my knights in the foreground for the moment. 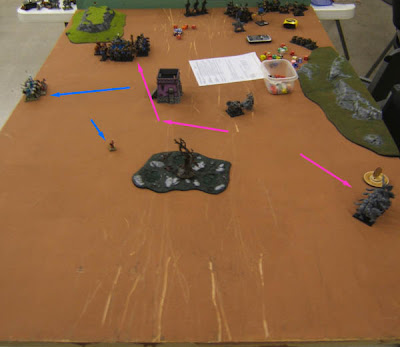 With Karl gone, the rest of my forces are swept away and it all comes down to the two tanks. The second one joining in the combat with the first. The first is destroyed, but in the process the chaos knights and dragon ogres are taken out. Somehow I managed to not wound the Khorne lord. By the end of the game it was him and some of the marauders beating on the tank, but not enough to destroy it by the end of the game.

My opponent was thrilled to have scored 10 hits with S3 marauders and horses in the last round of combat. The tank had only three wounds left. Sadly, my dice were also OK (well, only at this point) and it made all its armour saves.


So round two resulted in a minor loss for the Empire. The chaos player was just shy of getting a solid victory. Thank god I managed to take down at least a couple of high value units/characters.
Posted by ZeroTwentythree at 9:21 PM