Miniatures blogging time, and gaming, have both slowed considerably. Nothing wrong with that, really. Just a lot of other things going on.

I've been working on a few small commission items, but haven't painted much of anything for myself.

I picked up both WAB2 and WFB8, have glanced through both of them but haven't really immersed myself in either, let alone play any games. At the moment I'm a little indifferent to both. That will probably change at some point, but right now I'm a little distracted.

I have worked on a map for the upcoming Warhammer Empire campaign, Treachery and Greed. It should look something like this: 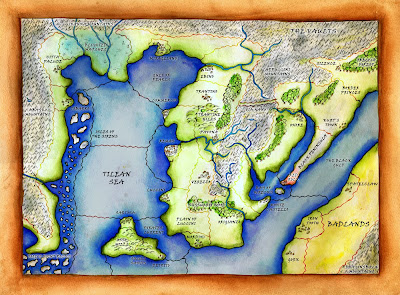 Next week is the annual "Grovers Grilling Cheese Fest" hosted by one of my friends from the local gaming group. I haven't been playing any games with them lately, so I am looking forward to an afternoon of gaming and cooking out.

I'm in the middle of a slow reading of "Alexander to Actuim," by Peter Green. I had previously read "The Helenistic Age" and wanted more. (Where is the underline function on the Blogger editor???) I've also been considering getting the computer version of Fields of Glory, just to squeeze in a little gaming action when I get a few minutes.

I've been doing some other non-miniature painting and other art projects as well. Mostly just for fun, and just a little profit. A couple are public art projects (one in progress, another in a couple months.) A few of the personal-amusement pieces have also ended up in a small local gallery, and I'm hoping to get a few more in another gallery soon.

Last week was the 6th anniversary of meeting my soon-to-be wife. We've been working a lot on the upcoming wedding (just a few months away!)

So that's my personal and gaming/painting life, for what it's worth. Once some of the summer activities and wedding cool down, I've got several painting/gaming projects in a holding pattern -- we'll see which one lands first.

Posted by ZeroTwentythree at 2:17 PM