This weekend was the annual Grover's Grillin' Cheesefest. Not so much a cheesefest this time around, as much as it was testing out some games of WFB 8th ed. with late night board and card games.

This year, deluxe accommodations were provided by a larger tent and more lights. We were out front this time... 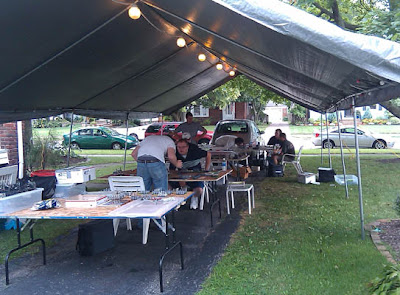 I played my first two games of WFB 8th ed. I'm going to leave some of the comments about 8th for another entry.

I played my Marienburg (Empire) army for both games. I wanted to try them out, as I think they're a lot better in 8th than in 7th, where Skaven were already good in 7th. I've generally done very well with Skaven in 7th (and 6th), but have lost so much with Empire in 7th that I feel I need to keep at them until I win more games!

My first game was 2800 points vs. Ogres. Bloody game, and close through most of it. I pulled off a late game win. Barely.

Second game was 2500 points vs. Dark Elves. Again, bloody game. This time I lost at the end, in spite of a massive early game advantage.

Later I played a couple games of Betrayal at the House On the Hill, which, it seems will be re-released by Avalon Hill. I'm thinking of picking it up as a "gateway game" to convert friends who are not normally into gaming.

I even tried making food for the cookout. I tried making an Asian cold noodle salad. A couple people said they liked it, and so does my fiancé. But I think it was pretty bad.

And because J, my Ogre opponent harrassed me about it, here's my only good photo from the South Park tournament. He was my Skaven opponent in that game, too, and accused me of hiding evidence of his doomwheels annihilating steam tanks. Even though, as I pointed out, one of my steam tanks lived and both of his doomwheels died. ;) In truth, though, it's like the wheels were meant to take down STanks -- at least in 7th ed. The STank getting bumped up to S10 will make it a bit more wheel-resistant now. 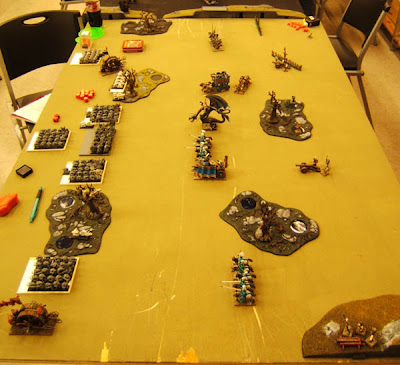 Posted by ZeroTwentythree at 3:19 PM