Played a two round 1500 point event today with my old gaming group, Twinsburg Wargame Association. They were small & quick games. I was a bit rusty & had to ask more rule questions than I probably should have, but I think it went fairly smoothly for me. 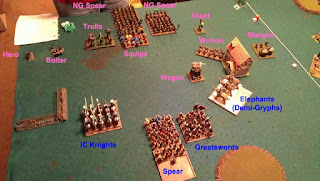 The game was pretty undecided at first. I thought I was screwed when, after eating the pump wagon and wolves, my elephants (demi-gryps in disguise...) got stuck in a combat with the giant where he rolled the "yell & bawl" result for several turns until I finally broke. My plan was to finish off the giant before the mangler squig could swing around behind me, but instead they got tied up, eventually failed a break test, fled and were run down/eaten by the giant squig(s).

In the center, speaking of squigs, I fought the unit of them with both my spear and greatswords. Eventually the flank unit of night goblins joined in, but broke and fled. The unti in the back panicked at some point, which took several/most of the goblin heroes off the battlefield. That was pretty much the end of the game.

On my left flank, the knignts with grand master, walked over the lone goblin hero and then battled it out with the trolls. I managed to cast Mindrazor on them at one point, which was fun but sort of a bit of overkill. I ended up winning after losing the elephants, but the rest of my army was in good shape compared to the competition.


Next game was against the VC. It can be summed up with the single word "attrition," but that might neglect the roles that "grave guard" and "Empire deployment" played in aiding the vampire win. 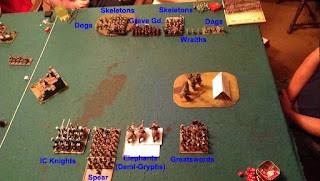 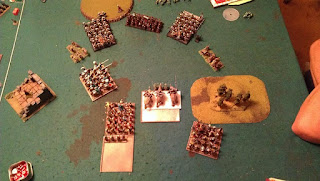 Initial set up in the first pic, the second pic is about 2 turns into the game.

After discovering the woods were a "venom thicket" the greatswords went on a really bad detour that kept them from bringing their force to bear in any sort of coordinated way with the rest of the army. Perhaps I should have just sucked up the random casualties and continued through the woods.

I had limited ways of dealing with the wraiths, all of which failed initially. I ended up having to charge my IC knights (with grand master with a runefang) laterally between the two battle lines to finally fix the situation. But that left a major clusterfcuk in the center, in which the grave guard got to deal individually with, first, the IC knights & grand master, then the elephants, and finally the greatswords.

To my credit, in spite of my horrible deployment and maneuvers, I caused a lot of damage. Unfortunately the VC spellcasters could raise new troops even faster. So it was a losing battle most of the game. I even successfully cast Pit o Shades several times, but it did me little good.

I need to revise my list a bit for the 1600 point games at the upcoming Grillfest. A few things to consider and, of course, that extra 100 points.

Posted by ZeroTwentythree at 12:43 AM