I haven't played Warhammer Fantasy (or Ancients) in years, but I have been following this End Times thing with a sort of morbid curiosity. Most of my info is second hand summaries, or bits of leaked scans, excerpts, etc. From what I can tell, it's all pretty awful. From any angle -- gaming, setting, fiction writing, etc.

However, I can't deny a bit of nostalgia. I still like the basic premiss of the setting, and I did play various versions of the game(s) for a good 30 years.

So why should I feel fine about the end of the (Warhammer) world? Because it ceased to matter to me a long time ago. Or at least what GW did with it ceased to matter. It was a good setting when it was skeletal, but the more it got fleshed out, the less it was a mystery, the less it was an empty home for hobbyists to furnish. I think the popularity of the game was as big a factor as anything. Players increasingly demanded more storyline, more fiction, more "support" (which, as far as I can tell, is just Newspeak for "sell more stuff.") The games -- both the rules and the way in which games were played -- became more competitive, more stagnant, fixated on formulas, and list-writing, and tournaments. And "meta." God, I cringe every time I hear or read the term "meta" applied to gaming. Makes me feel like vomiting all over the speaker/writer.

I think that the End of Imagination was as much a blow to the Warhammer as the End Times. More so, as the End Times mean little for those who have still got a bit of Imagination left. The games are still there, as are other rules, and the entire concept of creating your own settings, your own campaigns, and not being so uptight about how you & your friends push little toy soldiers around on a make-believe battlefield.


On a related note, and speaking of nostalgia... 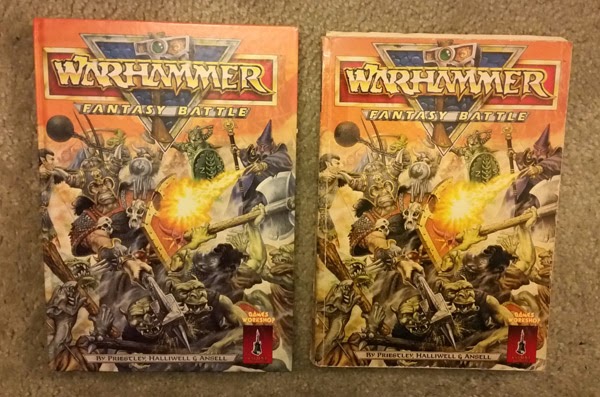 I recently wanted to flip through my copy of WFB 3rd. ed. for some inspiration, but couldn't find it with any of the rest of the gaming stuff that is (mostly) packed away in the attic. So I bid on, and won, a used copy on the dreaded eBay. Naturally, a couple days later I found my old copy. But I don't feel too bad about it. My old copy is a softback, and has been falling apart since it was in heavy use back when it was the current edition (and even a couple years after 4th was released) and I think a few of the template & reference pages from the back might be missing. The new one was "used" but was in even better condition than the seller described. Almost like new. And a hardback (though my memory has faded a bit... didn't those fall apart more easily than the softback counterparts?)

I doubt I will be playing 3rd ed. (or any WFB) anytime soon, but it's nice to have back on the shelf as I'm trying to "reconnect" with the hobby in some sort of way.

Posted by ZeroTwentythree at 11:51 PM