I decided to get into the "Orctober" spirit and try painting the last two of my small collection of Great Orcs. 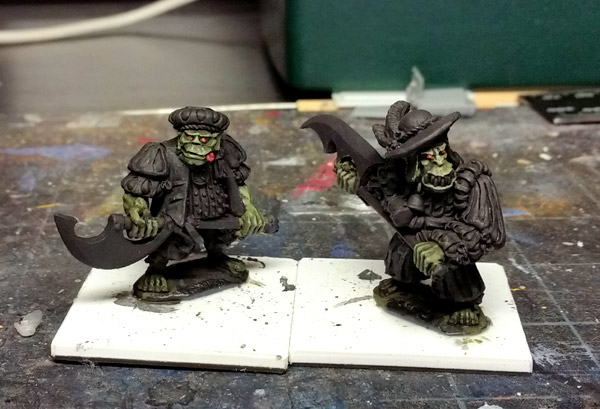 I'm sort of torn, though, since the approaching holidays are putting me in an Undead spirit. Mostly, I'm trying to wrap up some commission painting right now, though. And then there are the hobbits...


I've received the bulk of my Westfalia Halflings. I'm dying to get working on them, but I'm trying to hold back and finish a few other things first. But waiting is hard. The eternal struggle of the wargamer -- to finish projects (or even just a portion of one) before moving on to the next. As I've been painting other stuff, I've been reworking some of my campaign ideas in my head, and just set some of it down. I've mentioned it a bit before, as part of my planned solo gaming experiment. In short, it's an alternate history WFB, centered around Marienburg and the Wasteland in IC 2439 (shortly after Marienburg's secession.)

At some point I hope to polish it all up into a cohesive and complete multi-campaign set. Unrealistic plans - maps, illustrations, actually playing the games & doing battle reports, etc. Maybe published on this blog and/or downloadable as PDF. But for now it's still evolving, drastically at times. The arrival of the Westfalia figures have encouraged me to start re-writing one chapter. Here's the start of the fresh draft...


I.C. 2439. Marienburg. The hobbit convoy was halted outside the walls of Marienburg. Guards and teamsters all were a bit impatient with the delay. It wasn’t just the idle time -- being forced to wait in the Cursed Marshes outside the Suid Gate had made even the animals jittery.

The job wasn’t one without it’s dangers. Roads through the Wasteland were more dangerous than those of the Empire or Bretonnia. Trade most commonly passed along the waterways. But there were no navigable rivers from the Little Country to the City of Gold, just streams, marshes, moors, and a good quality road through uncertain country.

They were working under contract to an ambitious hobbit looking to trade the region's produce, especially it’s famed sausage, to the larger markets of Marienburg. The people of the Little Country -- man and hobbit alike -- were rustic folk. Although they engaged in trade with merchants of Bretonnia, Reikland, and even (rarely) the dwarfs of Grey Mountains, they usually relied on the foreigners to come to them. Nob was the first hobbit (as far as anyone knew) to make the effort to market the communities’ wares directly to the outside world. He argued that by traveling to Marienburg, he could command a better price, and in the process employ some of the restless or ambitions youth of the Country in his venture as well.

The promises of mild peril and moderate profit worked. A significant train of wagons and an adequate force of guards had signed on for Scrobbleton’s Jackrabbit Trading Company’s first undertaking. And it had gone well. Better than expected, in fact. Flush with silver, and with the promise of further expeditions, most of the profit (after food and drink) was spent on new equipment -- better wagons, larger draft animals, heavier arms and armour.

This second trip to Marienburg had gone just as well so far -- until they had reached the gates, that is. This time they were barred from entering the city. Only Nob, along with his master of books, Will Smallroot, and a pair of personal guards, were granted entry to meet with the authorities. Now it was past first supper, and uncertainty was leading to disquiet. There was little room to pitch camp outside the city walls, and the landscape was pretty miserable to begin with. Rumors of marsh beasts large enough to swallow a hobbit whole were well known.

Minutes after a Bretonnian caravan had passed by the hobbits and entered the gates, Milo Greycap, one of Nob’s guards, emerged from the tall reeds to the west of the road.

“We need to leave. The master’s been taken, so has Will. I snuck out the gate but they will be coming for the wurst. Maybe us too.”

His comrades stood silent and dumbfounded.

“I don’t know everything. I was waiting down the hall. Through the door I overheard something about contraband, mushrooms, and the corruption of Marienburg’s youth. If we don’t get out of here, I don’t know what will happen. We need to leave now.”

The caravan became a rapid and precise maneuver as wagons were turned around, ranks were formed, and the entire party began a brisk march South.

As the walls began to disappear in the distance and growing darkness, a distant voice was heard, “Stop! Hold the wagons!” followed by a whiny blast from a horn. The hobbits pace quickened.


The campaign maps will be based on this composite from various sources. 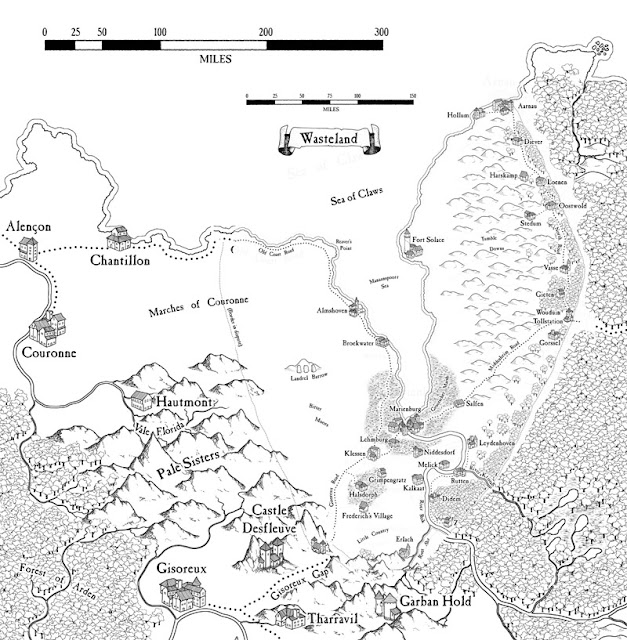 Posted by ZeroTwentythree at 12:52 AM