Recruits for the JTC - Small and Large

Had to head out of town for a most of the week on short notice. Had a miserable time in Texas. Got home and had a busy weekend. But I did rush a few minis through... 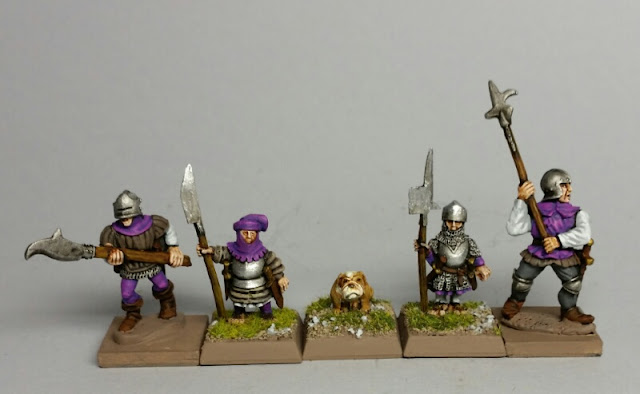 In the center is the canine mascot for the Boar Cleavers (first two figures from last week are flanking him/her -- I think I need to come up with a name!)

On the ends are a couple of test figures for an upcoming unit (or two) of human halberdiers.

There will be even more humans to come, for the Jackrabbit Trading Company! Including archers. I've got this notion that the humans stuck with archery, while the hobbits, recognizing the limits of their pull strength and stature, switched to crossbows. (In case you're wondering about the odd reversal of fantasy stereotypes.)

When hobbits settled in the Little Country, there were already humans living there. The newcomers formed their own communities, as well as joining existing communities of the "tall folk." For the most part, the humans of the region found that they had more in common with the "little folk" than they had with their nominal governors bustling Marienburg, nor their neighbors in Bretonnia & the Empire, and the region has benefited.

When Nob Scrobbleton formed his Jackrabbit Trading Company, he recruited across the region. The Company is comprised of almost as many humans as hobbits (and even a handful of dwarfs!)

I believe the figure to the left is from a a Grenadier "Fighting Men" pack (now sold by Mirliton), and the gent on the right is from Front Rank. As previously mentioned, the hobbits are from Westfalia, and the dog has been confirmed as a (former) Mega Mini figure, now sold by Turnkey Miniatures.

Whoops! I just realized I forgot to go back and highlight the human's halberd heads! Guess I will go do that momentarily...

Posted by ZeroTwentythree at 11:22 PM