Since I recently received, posted about, and already started painting a few of the Midlam Miniatures hobgoblins, I've been thinking about how they fit within my Althammer setting.

My Althammer setting is the Warhammer Old World, with a twist -- and centered on Marienburg & the Wasteland. In this universe, orcs & goblins have been largely driven off from the area, as well as the adjacent Empire & Bretonnia for almost a century. A few (very few) orcs have been assimilated into the mercenary culture. And there are still some small, stray bands of goblins skulking around the wilderness.

Orcs, Goblins, Hobgoblins, Half-Orcs.... who are they?


Orcs. The orcs are a more or less homogeneous species. Sub-classifications (black orcs, savage orcs) are arbitrary or cultural. As mentioned above, they were driven out of the area as a large-scale population. A rare few have ended up in small mercenary bands and have partially taken on a semi-civilized lifestyle. Far more numerous in more distant regions, there are no immediate threats of large scale invasion. 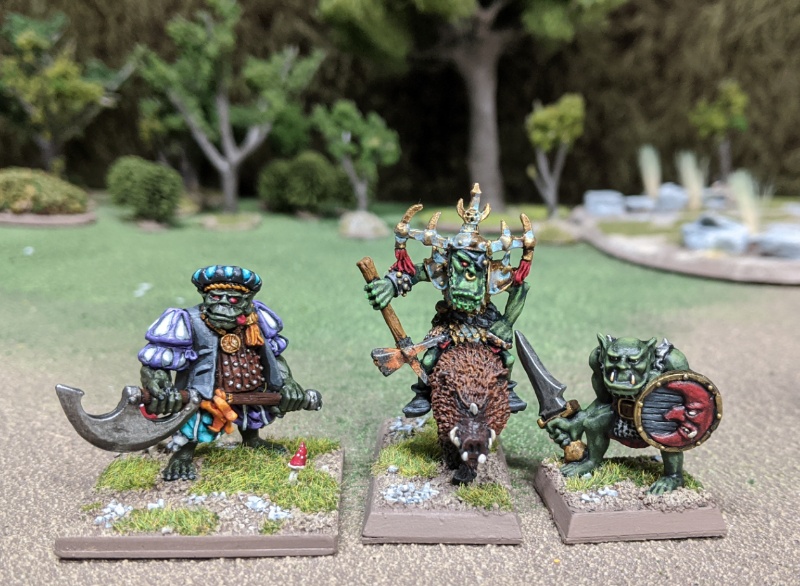 
Goblins. Goblins are a far more heterogeneous group of species, classified together (and frequently living/working together) due to a few similarities... most are physically smaller and less numerous races thriving by stealth, trickery, and manipulation. Some may ally themselves with other groups (orcs, trolls, etc.) but all are ultimately self-serving due to the necessities of survival. They may appear in mixed groups or homogeneous bands, and are more numerous than anyone in Marienburg suspects Each population or warband may have it's own quirks and characteristics.

An assortment of "goblins"


Half Orcs & Hobgoblins. Both are terms used by outsiders (mainly humans) for largely (but not always) mixed race populations who don't quite fit in with any of their parent cultures for one reason or another. Sometimes their communities are simply a destination for those who don't feel they fit in with the society in which they are born. Differences between half-orc, hobgoblin, and other similar names are typically just a difference in regional terminology. The Grey Mountains and its foothills are home to significant half-orc populations who have mixed relations with their neighbors -- and each other.