The small trade convoy had made it's second trip to the highlands, and was on its way back to the Little Country. Two wagons were loaded with some sort of exciting new crops, or so everyone had been told. Nob was certainly excited, and the odd half-orc he had met with at the caves was certainly excited as well. Or maybe the latter was just exceptionally odd.

The details weren't much concern to the escort. They were a mix of hired, uniformed guards and mercenary scouts. The former were beneficiaries of Nob's first mission to the highlands. His trade in exotic crops between the hills, the Little Country, and Marienburg were quite a mercantile success story. One worthy of the City of Gold, but unusual for the hinterland. After those first journeys, many of the young hobbits who had accompanied the ambitions entrepreneur were signed on as Company Regulars, provided with high quality equipment and gaudy purple uniforms.

A successful second mission, they were told, would bring increased reward. Naive as they were, they didn't expect increased danger. The first mission had passed without incident -- a few simple hikes through the Broken & Waste Lands. Those first missions had been relatively quiet. But now, on the first leg of their second mission, they found themselves ambushed by a band of trolls. The beasts descended on them from the hills just as the convoy had made camp beside the sparse dirt road for the evening after leaving the half-orc village.

Even Nob didn't expect trouble. Fried and his half-orcs held great influence over this part of the highlands. But trolls were notoriously unpredictable. Were they double-crossed? Were the trolls a rogue element in the plan? It didn't matter, the only thing that mattered was fighting off the brutes and making it back home...

The battle was fought on my tiny little auxiliary table, 3' x 3'.  It was fought using the Dragon Rampant rules, my first attempt at adapting a miniatures game to solo play. Dragon Rampant works pretty well for that, due to the random activation rolls. Additionally, the scenario was fairly straight forward. The trolls were after the loot in the wagons. The hobbits were defending. Trolls would head directly toward the wagons unless they had been wounded by hobbits the previous turn (in which case they would attack in a 50/50 roll off) or hobbits were directly in the way. The hobbits would react based on their roles. Archers would avoid combat and shoot, militia and guards would protect the stuff.. 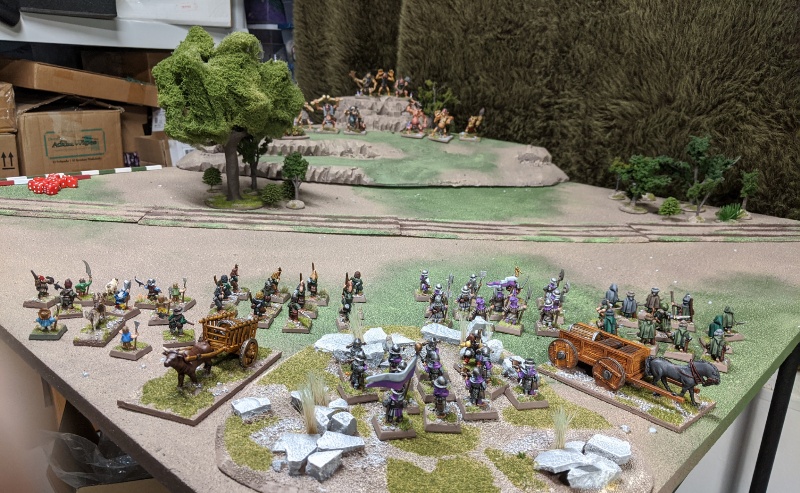 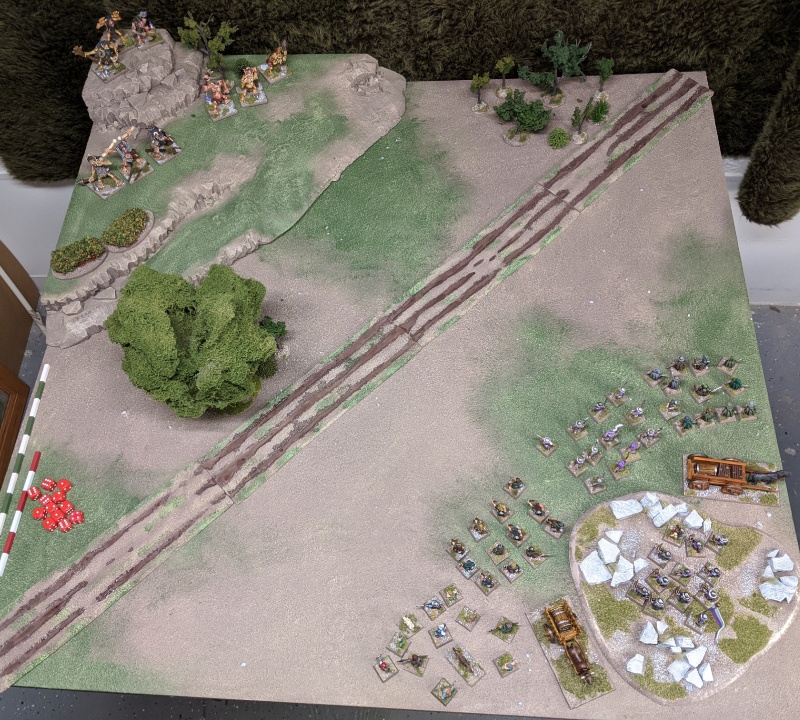 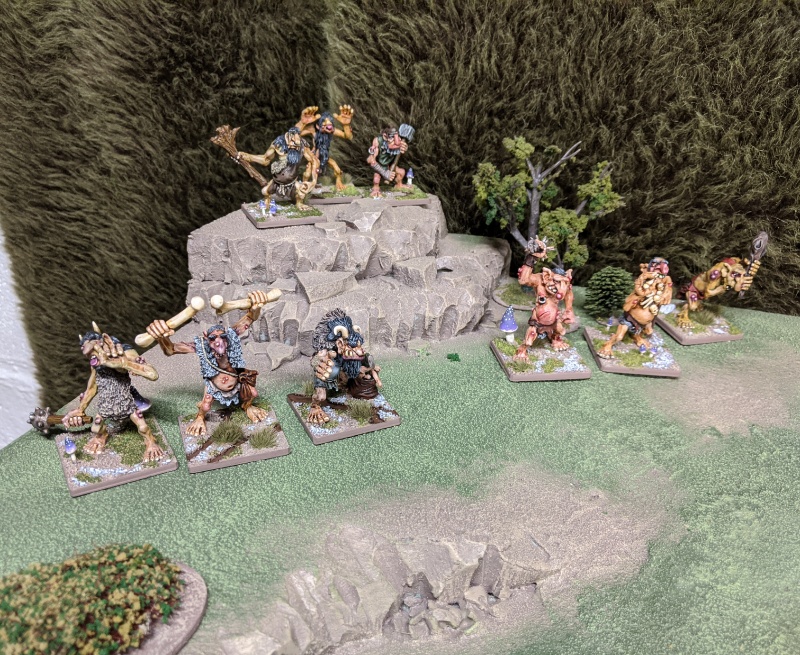 There were a LOT of failed activation rolls on both sides. That made for an unpredictable game. As soon as I thought one side was screwed, the other side would roll just as poorly. Here some hobbit archers had miraculously chased off some trolls from combat, only to blow their roll to shoot them in the back! Meanwhile, another group of trolls charges unstoppabley at one of the wagons! 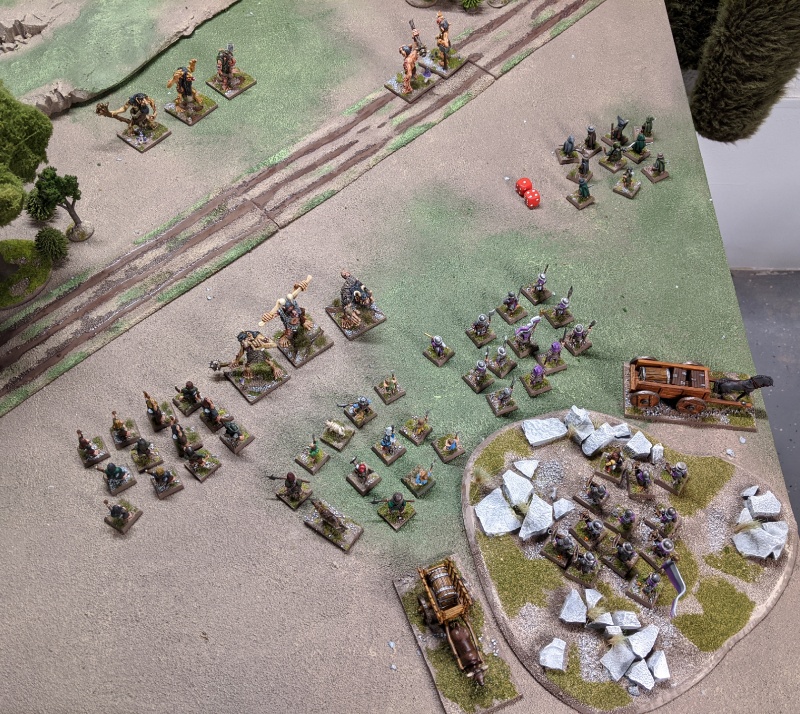 Things get messy. No hobbit wants to melee with a bunch of trolls. But they manage to fend them off for a moment! Even one group who has already looted the wagons has dropped their precious reward and run of to further trouble! 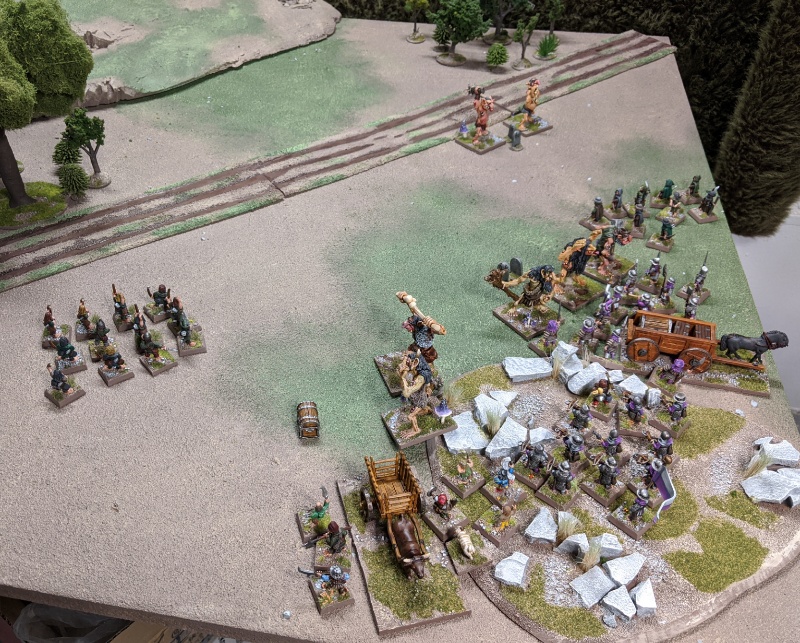 In the end, the hobbits defend their camp and cargo. The trolls are beaten and chased off. For the moment.... 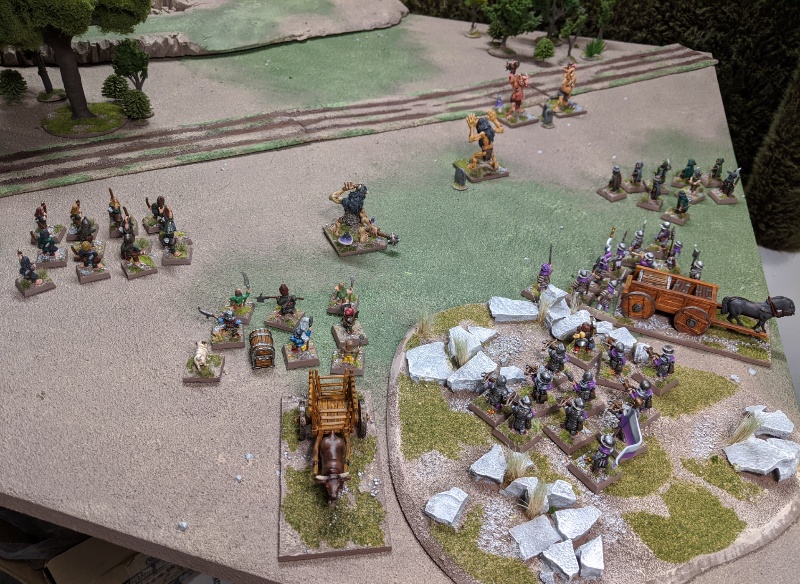 This was my first time trying the Dragon Rampant rules. Although I've played some other solo games (mostly board games), this was my first attempt at crossing over. The solo rules were simple. The trolls were after the 'shrooms in the wagons. They would head there as their primary task. If there was a hobbit unit blocking their way, they would fight through. If they were wounded by a hobbit unit within charge range, they would have a 50/50 chance of pushing through to the chests on the wagons, or attacking whoever had hurt them.

There were some distractions, but for the most part the trolls carried on to their objectives. There were poor dice rolls on both sides. I'd say the rolls for BOTH sides were far, far worse than average. Every time I thought one side had really blundered in tragic fashion, the other side would follow suit!

That brings me to my next point... the game really seems to be a matter of random luck & dice rolls. Due to the simple mechanics, maneuvering and table-top game-play seems to have minimum impact. I played the whole thing out over the course of several 10-minute sessions.

Nothing mattered much except that there are two units in combat -- probably with similar stats. The game is all about the dice rolls. A little disappointing, even for a  solo or "beer & pretzels" game. It took longer to select forces and set up than actually play the game. There were tense moments -- will a certain unit survive before being overrun, etc. But, as mentioned, that was more a matter of dice rolling than anything like position, abilities, etc.

EDIT: Although I'd like a little more from the rules. I still had fun & don't want my criticisms to make it sound like I didn't. I'm going to give the game a few more tries. If nothing else, it was easy to put the game together, quick to play, and I didn't have to get bogged down with a bunch of complex or unfamiliar rules.


Posted by ZeroTwentythree at 12:43 AM