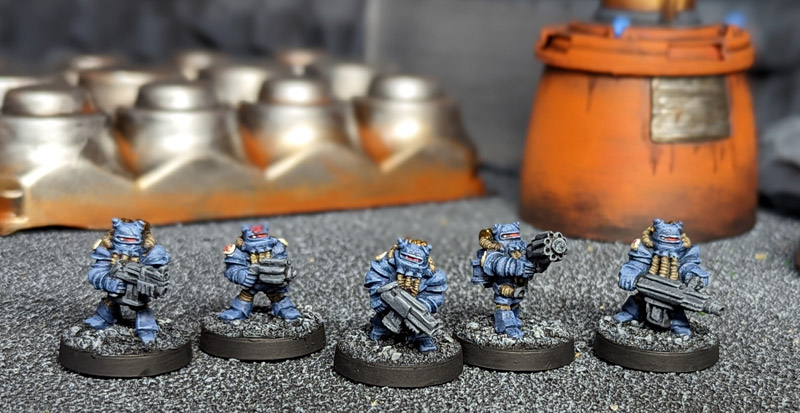 Although they initially earned their living as a salvage crew, some members of the Belegost eventually turned to mercenary work. Particularly some of the older crew who had fought many battles defending their claims, eventually realized they could cut out the salvage work and render services based on their hard earned battle prowess -- usually at a better wage. So it was that the Belegost Scrap Wagon diversified their operations into a salvage wing and a mercenary wing. The Anvil and the Hammer, as they started calling it, based on the ancient traditions of their people.
As explained above, I am painting up the Skull & Crown "Space Scrappers" and Satyr Art Studio space dwarfs with two sub-factions inspired by two different aesthetics within among the figures. The more heavily armored become the mercenaries, and the less armored figures (also with less military looking weapons in many cases) become the salvage crew. I'll keep the color palettes similar, but with more variety among the salvage crew. I just finished the first half of the mercenaries, above.
Posted by ZeroTwentythree at 10:02 PM