Since a few people have commented on the Renegade cav. both here and elsewhere, I took a few comparison shots vs. other large figures that are from different periods/genre for the sake of comparing scale. 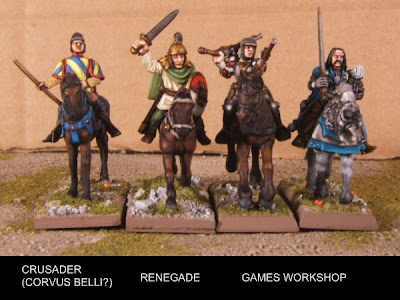 They're big, but close to the scale of GW figures. I suppose that would be a bonus for anyone wanting to use Renegade for WFB. Also, the Crusader late medievals are a bit large, and don't match the rest of the Crusader line. I believe when I bought mine long ago, they were sold be Corvus Belli, who seem to have gotten out of the 28mm historical business.

Posted by ZeroTwentythree at 11:33 PM