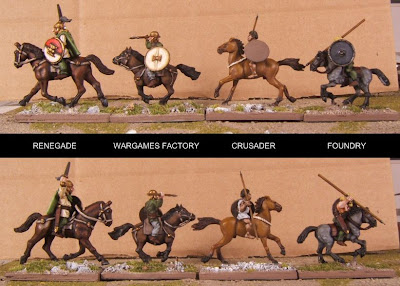 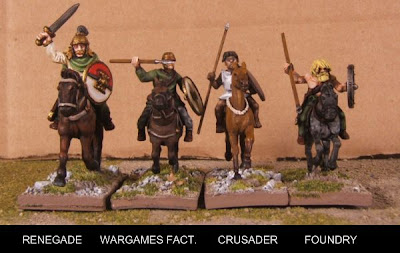 These are the first of the Celt cavalry I've painted. I've got a unit of each. They really couldn't be at more opposite ends of the spectrum in terms of size and scale of objects/details on the figure.

My concern with the Renegade figures is that they look out of scale with everything else. It's a shame, as they've pretty nice. In regard to my previous comments about them, I was mistaken, there are actually two horse poses, but they're so similar it's difficult to notice. The essential difference is just the position of the head. The legs & body seem the same. As far as the difficulties mounting the riders on the horse, I ended up snipping the back end of the saddle off, then filing it down. If you look very carefully, it does look like he's sitting far back on the saddle, but you really have to be looking for it. The cloaks cover the back of the saddle anyway.

The Wargames Factory figure was easy to assemble. I like the riders a little better than the Celtic infantry (which I was a bit underwhelmed by -- see previous entry), and they give you two riders per horse -- one armoured, one unarmoured. The sprue is filled out with some more heads, shields & other equipment. The horse has a bit of a squat look to it, but when put next to the Foundy German it's not too far off. The neck suffers from the same problem as some of the GW plastic horses (especially the older ones) -- the separate head leaves an obvious joint at the neck. The solution, presumably, will be the same as the GW figures as well, try to fill with a bit of greenstuff.

Posted by ZeroTwentythree at 11:03 PM