Painting At a Slightly Larger Scale

I spent three days at the annual Ingenuity Festival this past weekend. About 15+/- artists were painting "murals" on the floor. A little over half were completed ahead of time, the rest of us worked as the festival was going on.

The festival now takes place on the unused lower half of one of the bridges spanning the Cuyahoga River, connecting the two halves of the city.

Here I am just before the start of the Festival, on a sunny 90F degree Friday afternoon, at one end of the bridge. 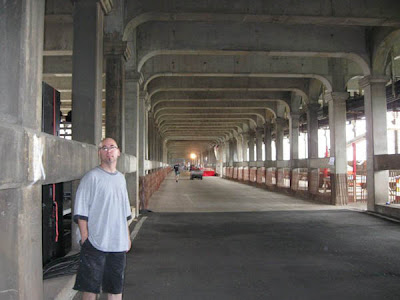 My work space was a sheet of plywood strapped down the the open metal grating at almost dead center of the bridge, over the river. I kept waiting to lose a paint brush or a cap from a tube/jar of paint, either through the grating or over the edge (just beyond those thin wooden slats.) I managed to keep everything together. 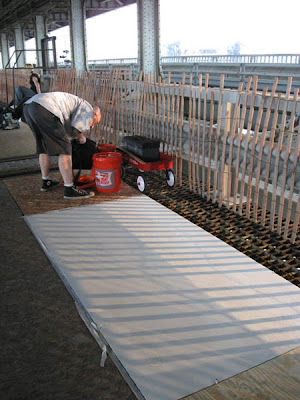 A couple of photos from Saturday afternoon. The temperature dropped about 30F degrees, and the wind reversed direction. I was working almost directly opposite the festival "centerpiece," an artificial waterfall pouring from the top of the bridge to the river below. The high winds soaked me and my painting throughout the chilly day. 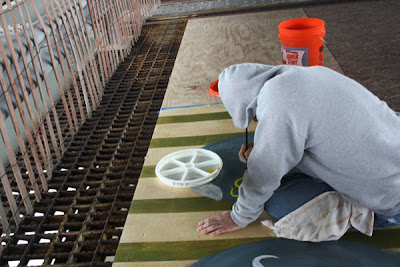 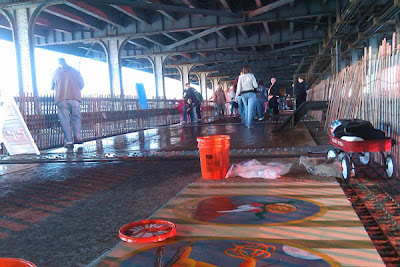 I continued painting through Sunday, though I called it quits in the early afternoon so that I could wander the festival some more and view/participate in some of the other events. In spite of having to fight with the weather and conditions, which were a major setback (acrylic paints on a wet board that people would walk all over after dark) I had a lot of fun. I also learned a great deal about painting "in the field" in less than ideal conditions. Actually, it made it a bit of an interesting challenge -- though I could have done with a bit warmer weather if I was going to be soaked all day.

As far as the rest of the Festival -- it was great. I really enjoyed all the other art, music, dance, theater, food and, of course, all the great views from (and of) the bridge.

I'm back to work on the "mystery sculpt" and almost finished.

I also have less than two weeks before my wedding, and then few days after that for some much needed R&R, away from civilization (in a cabin in the woods.)

After that, I've got a work desk full of figures to paint. First up will be some overdue commission work that I need to complete. Then a few surprises...

Posted by ZeroTwentythree at 3:48 PM