All Roads Lead to...


There are quite a few new ancients rules out now, or on the horizon. I'd like to give each of them a chance, if I can. So when I had a few minutes to paint and decided to do a bit of painting for myself with that time, I went back to Rome. I can already field a decent sized Rome vs. Cimbri/Teutones game. But I've also had Rome vs. Rome in mind as an eventual goal. So I'm painting more Romans.

I went with a simple scheme again, and did a bit of speed painting, but without the dip.

Nothing terribly special, but exciting for me as it's the first real painting I've done for myself in a while.

I've also pulled out a unit of Spanish cavalry that I had started ages (a year?) ago, and may try to get to that next, while I prep some more Romans. 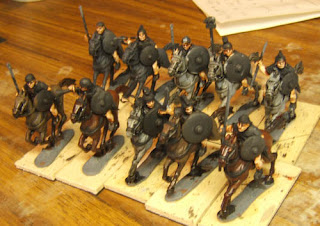 I think I may indulge my Plutarchian fondness for Sertorius, and start with a Rome vs. Rome & Spain goal. I think this may be a good way to throw in not only a lot of Roman legion, but see how the different game systems handle different types of lighter and/or "barbarian" troops.

Since it's been a while, I thought I'd try to post some extra photos. So here's a few old Lance & Laser figures I painted for Armorcast, who is the current manufacturer.