Figures on the Table and Halloween

Some lousy photos of one of the next things on my table. A pair of old Marauder dwarf swivel guns. I bought them eBay ages ago, but the package arrived damaged and a few parts were missing. It's taken me years to finally get around to creating a few replacement parts (one and a half of the two frames) for the guns. My plan is to mount these on 40mm bases and use them to bolster my insufficient numbers (10) of Marauder dwarfs with handguns. 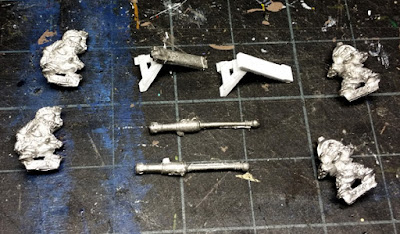 They're cast in a very soft, presumably lead-heavy alloy. You can print pretty clearly with them on paper. 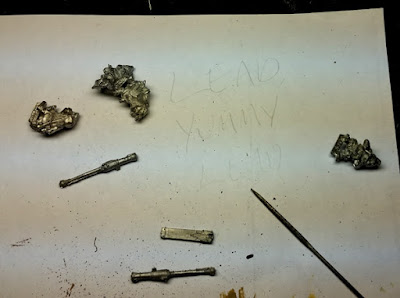 My time the past few days, however, has been taken up with building a mask for my daughter. She has been changing her mind every few days as to what she wanted to be for Haloween. With just a couple days to go, she really wanted to be a dinosaur. I ran out of time for some of the details (and rest of the teeth). As it turns out, the poor kid is really sick and didn't wear the mask anyway -- though she did go trick-or-treating for just a bit, dressed as Super Girl. 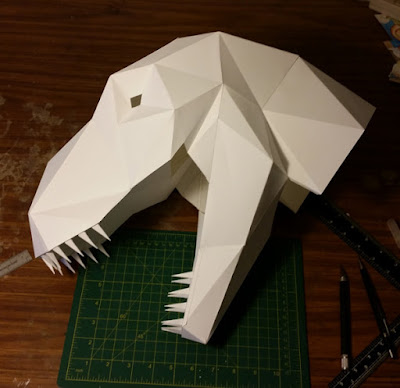 At the end of the day, T-rex (shown here after my daughter had painted it earlier in the day) got into some of the left-over candy. It is a well accepted fact that T-rex was not just a predator, but was an opportunist not above scavenging. 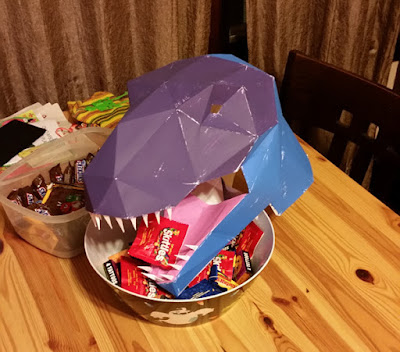 Posted by ZeroTwentythree at 10:22 AM