For the past seven (?) years I've participated in the Warhammer Empire "Pleasant Surprises" secret figure exchange. My recipient received and has recently opened his figure. I converted an old halberdier into a standard bearer for his Stirland army. I left the base plain so he could match the rest of his army himself. 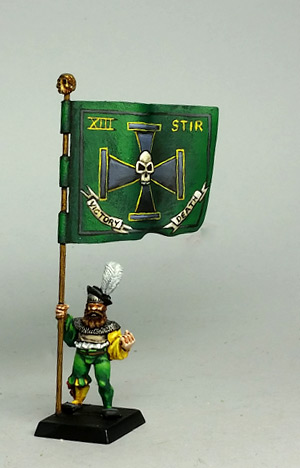 In past years it has become customary to also include some treats from your home country or region, since a lot of these Pleasant Surprises are traveling around the world. (This figure went from Cleveland, Ohio to Finland, for example.) I've always been stuck in that regard, but this year I sent a small bottle of Ohio maple syrup, some Cleveland Stadium Mustard, and -- just because they are weirdly good -- a bag of the limited release Lay's Biscuits & Gravy chips. I think I covered the geographic regions, national, state, city. :)

Posted by ZeroTwentythree at 12:00 PM