In the Grim Back to the Future, There is Only... GOTHMOWER

Finally starting in to my return to sci-fi...
Procrastination has ended (for now) on the Meat Hating Robot Pirates. Got the urge to paint an assassin, a kitbashed hoverbot (based on a kids yogurt pouch lid), and a golden (robo) monkey. 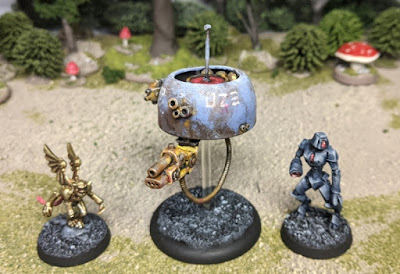 On the meatier pirate front, I painted a test figure for my next Old World Army Challenge force. This year I'll be doing some colorful Rogue Trader era space elf pirates, with aesthetics & color palettes based on the art of Pascale Blanche and that whole Gothmower thing I talked about previously. 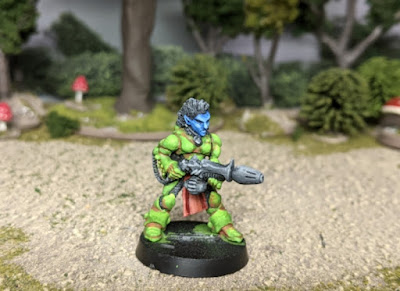 I haven't hammered out details yet, but it's not all pirates... I still plan on an AdMech faction, and I'm really getting into the idea of a backwater planetary defense force, civilians, etc.
Posted by ZeroTwentythree at 12:03 AM