The second WAB demo was on Friday morning. 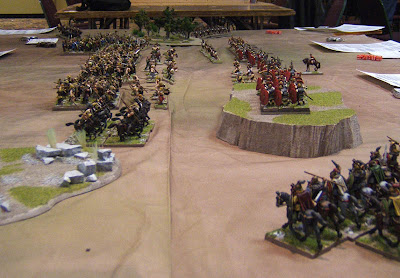 The battle in the foreground was the first, and most important of the game. The Gallic cav just barely beat the German cav, but sent them fleeing. Unfortunately this also set off a wave of panic, with the flank player's entire portion of the army fleeing, and unable to rally for the remainder of the game. (I felt bad about that, but I wasn't certain what I could do, since it was all down to a few bad dice rolls.) 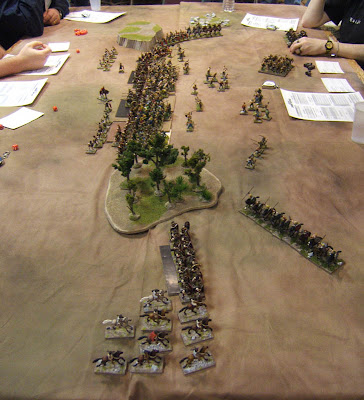 Here's a later shot, from the opposite side of the table. The barbarians were able to crash into the Roman line before they could take advantage of the victory on the flank, or equalize the numbers, since one legion was running around the flank. They hit, but not quite as hard as they needed too. The second pivotal moment of the game was another odd dice moment, when two of the center warbands failed to do any wounds, but took a remarkable seven wounds from the legion they were double-teaming (that included two chieftains!) Even against lesser troops (Spanish auxiliaries) they failed to hit hard enough to win the combat. So the center broke, and once again set off a bit of panic, and the line retreated. Miraculously they all rallied, but the momentum was stopped, and it was the Romans turn to charge, stealing the initiative from the barbarians. In the last fight of the battle, the German cav on the flank smashed itself on the Roman legion, fled, and was run down by the Numidian cavalry.

Another Roman victory, this one more solid than the first.
Posted by ZeroTwentythree at 1:11 PM