First off, a bit of a disclaimer. The scenario involved leaving a portion of your troops off the table in "reserve," to follow the rest of your army onto the table at a later point. Due to misreading the scenario, both my opponent and I kept rolling (and failing!) each turn, instead of automatically bringing on our reserves at the start of turn 3. In all honesty, though, this probably benefitted him more than me, since I left almost half my point value off the table, and due to the drilled + fast march "stupid Roman trick" I could have redeployed pretty quickly had I actually made it onto the table. 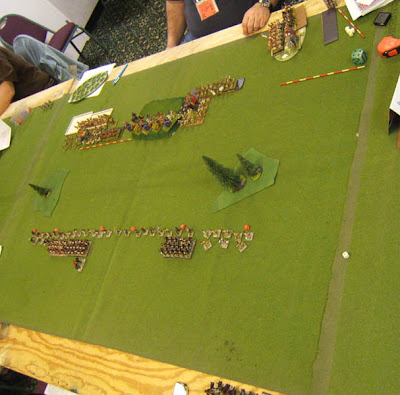 My opponent had, from left to right, elephand plus escort, big unit of archers, elite infantry (maiden guard?,) noble chariots on the hill, another elephant plus escort, followed by some mercenaries. 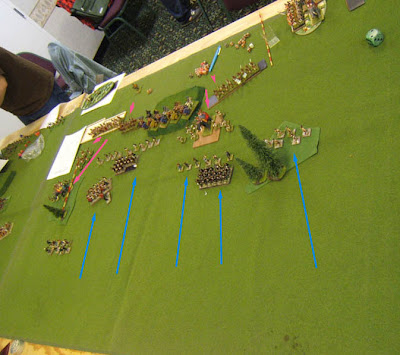 So obviously my plan was to rush ahead as quickly as possible and not get shot to pieces.

Early in the game -- turn 1, I managed to get a lucky sling shot into the left elephant's skull and send him stampeding through the woods. On the right, my skirmishers fled from the elephant and the legion let it pass through their ranks. Their combat with the escort, and pursuit sent them into the mercenaries beyond. 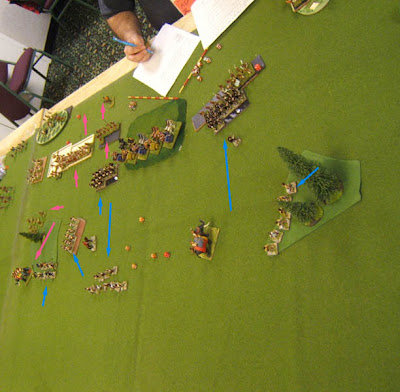 On the left the Spanish kept the flank occupied but did little. The legion, however, beat the maiden guard, sent them fleeing and panicked the archers and the general. The general rallied at the last minute (I think) but everyone else kept running.

Game over. Victory for the Romans.
Posted by ZeroTwentythree at 1:30 AM