As it turns out, I was really bad about taking pics of the doubles tournament. Again. So we're just getting a bit of commentary. To be brief, let's just say that things didn't go so well for The Good Guys.

The Good Guys were, of course, my fine upstanding Romans, and the barbaric yet noble savages in my friend Ron's Warlord army.

Our first game was against Macedonians & Persians, in which I started off by failing a few freak rolls, my entire flank crumbling in spite of having an advantage of position, and then recovering enough to at least hold off disaster (and even recover a bit.) The Warlord army was also thrown out of whack by an early bad dice roll, especially a failed Warband test which saw the biggest baddest unit on our side charge almost 90 degrees into the flank of an elephant instead of doing something more useful.

The second game was against Greeks. Lots of them. I screwed up trying to redeploy and get my allied cavalry away from the phalanx on the flank. My partner ended up getting pounded by hoplites. If we had been playing, oh, maybe like 10-12 turns I might have been able to bring my plans to fruition. But in hindsight, that doesn't seem like it was such a good plan.

My luck improved significantly in the Classical division of the singles tournament. Or at least it initially did... 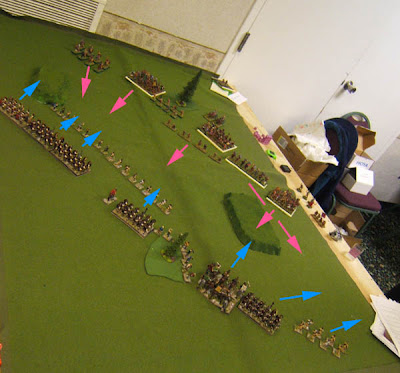 Our bad rolls from the night before (doubles) seemed to plague my opponent. We set up per the scenario, and it looked like a straight forward battle. On my left flank, I hoped to get my Spanish auxilia onto the hill before the warbands arrived. On the flank, I also hoped to contest the hill with the cavalry and swing a legion around the far side, covered by the slingers. This turned out to be a bad idea, but I quickly redeployed the cav to the far flank (against the enemy cav) and my legion onto the hill. 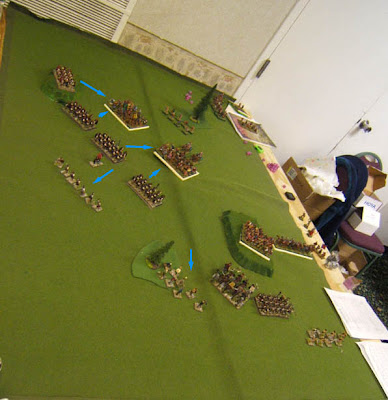 A few failed warbands by my opponent on my left flank ensured that the left and center were mine. The cav surged forward into formed legion (and then flanked by the Spanish) and one Pict warband ran forward into my charge range, then stopped -- giving me another ideal flank situation. On my right, I managed to pull myself out of the awkward redployment quite well... 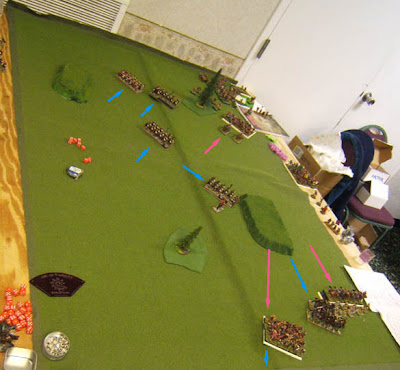 ...until I rolled like crap. With the center and left more or less wrapped up, I started to use the legions' drilled ability to move them over to my right. I was holding and grinding the warband down on the hill, and my cav (with chieftain) on the right got the drop on the Pictish cavalry.

Sadly, I rolled no hits, but lost one of my own. In addition to running away from a decent fight, they took (panicked) the legion on the hill one half turn before they could receive support from the center legion hitting the warband on the flank. So much for famed Roman LD -- rolling 11 hurts everyone.

So with that last minute flub, the game went from what looked like a sold Roman victory to a draw.

Posted by ZeroTwentythree at 11:36 PM