Continuing to paint for other people. Finished some more elves, and some less savory types (sorry, no pic at the moment.) This only fuels my wandering thoughts of gaming in the First Age of Middle Earth as I'm revisiting Tolkein's books at the moment... 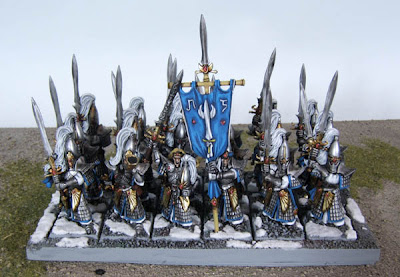 ...and now for something completely different...

Setting off from Folkhome. The village has given me a evil little mule to carry the two barrels of "Shannara Green." I think we've come to an understanding, though, and he only bites strangers now. I've also stowed away a pouch of Weeping Marsh'rooms to sell at the market as well. No one told me the mule's name. I'm not sure anyone has given it a name -- I think they're glad to be rid of the beast. I will call him José.

I've finally cleared the forest and have arrived at a stinking little village at the mouth of the Weeping River. The food, ale and yokels are all of questionable value. The hospitality is alright, I guess. But that doesn't really help digest their victuals nor their conversation. I've arranged for barge transportation down river with a really awful smelling human. I talked him down in price, but still feel I was ripped off. I'm off to hunt down some aromatics to help make the journey bearable. Do all the big folk reek like this?

Floating down the river. Bored.

Our barge was attacked by half-intelligent swamp iguanas. I participated in the defense, in what manner I could. But I'm a lover, not a fighter. I nearly died. Still, I sliced one of them in half as they tried to flee. Didn't get a chance to see if their hide made decent boots before the crew kicked them overboard to feed the fish. Reminder: secret healing stash in cabinet to the left of the cabin entry.

Reached the caravan crossroads. Description seems only partially accurate. There is certainly a crossroads present, but no caravans. I've got over a week more on the road, apparently on my own, before hitting civilization.

Close enough to civilization. I reached an inn along the road several days outside the city. The food and drink are decent, but the stable boy is a bit dense. He almost got his hand bit off by José not fifteen seconds after I told him that mule was a mean sonofabitch. The locals have been telling me stories about a werewolf prowling the land between here and the bridge a day's journey to the west. Werewolves? Seriously? I'd wager both barrels of herb that they're going to try selling me silver trinkets any minute now. What do they take me for?

José is dead. His throat was torn apart by a werewolf. If the stupid beast hadn't froze-up when I tried to make run for the safety of the guarded the bridge, I would still have my tent, my food and my blanket, and I wouldn't be lugging these barrels of leaf around on my own. It's not that they are heavy. It's just inconvenient that they're about as tall as I am. I'm going to try the puppy dog eyes on the Captain and see if I can get some help carrying my produce to market. That figging mule. His loss is going to cut into my profit. I'm going to have to dilute the herb a bit to make up for this.

Made it to the city gates, thanks to the labors and protection of one of the soldiers of the bridge, a man by the name of Roderick. At first he didn't seem to pleased to be assigned to escort duty, but he eventually opened up a bit. After telling me that there are some horrible and deadly caves under the city, he recommended I stay at an inn who's main selling point is, apparently, an entry to said Caves of Deadly Doom and Hobbity Death. I don't know what to make of that. I think Roderick was dropped on his head as a child. He also recommended a cat house to me, but I told him I had no idea why I would need a cat as I am just trying to find a buyer, make my deal and get out. I don't plan on having time to develop a mouse problem. He just laughed as he walked away. I feel that my initial speculation on his early childhood head injury may be justified. Once inside the city, I hired some filthy little street urchin to direct me to the Inn and help carry the barrels. I'm finally feeling that the trials and tribulations of my journey are finally at a peaceful end...

Posted by ZeroTwentythree at 12:08 AM