After yesterday's game, I decided to make some spell-specific markers for spell effects. I seem to have a fondness for the Lore of Life, so I've started there.

First a shot of my current Jade Wizard. To his left is the "Throne of Vines" maker, to the right is "Flesh to Stone." That's my poor attempt at making glowing eyes (using OSL) on a stone figure, my the way. Not altogether successful -- I may try to touch it up.

After I took the photo, I thought of a better Throne of Vines idea. I would need to model two separate mage figures. One normal one of him standing, the other of him actually sitting on a throne of vines. Then I swap them out as appropriate for his current status. Don't know that I'll ever get to that. 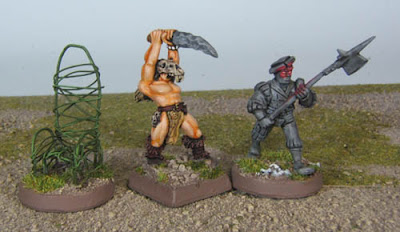 And lastly, here's my take on "Shield of Thorns." Not terribly impressive, but gets the job done. I was thinking I wanted something low-key, but after putting it in front of the unit, I'm wondering if I should have made it much larger after all. 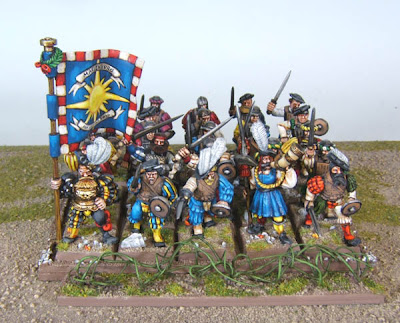 I've got to figure out what the next lore to tackle will be. I've taken Fire as a secondary, but have also been considering Beasts. Maybe one or both of those?
Posted by ZeroTwentythree at 6:01 PM