A year or two ago, the first three figures below were spotted at a Cold Wars or Historicon flea market. While I was cruising the rest of the market & thinking about going back to pick them up, they were sold to someone else. Later I discovered one of my friends had bought them. So now he decided to sell them and I nabbed them up, along with the hand cannon ogre in the second photo.

This nearly completes my collection of Marauder "Imperial" ogres. I am only missing the one with the morning star/flail type weapon.

Normally I repaint figures to match my own, but the painting on these is so good I see no need. I'm just going to base them up to match mine and touch up one or two spots of chipped paint. 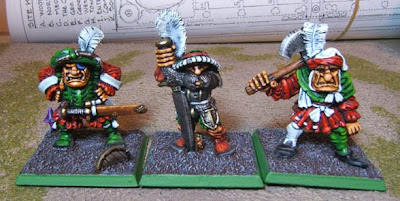 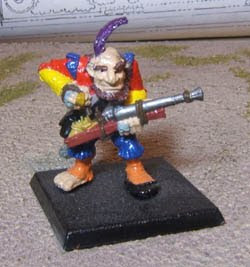 Speaking of flea market sales, I've been dragging around my last three bases worth of painted GW snotlings for years, practically trying to give them away with no luck. So I've popped them onto individual 20x20 bases and will call them "lesser goblins." In addition to the ogres above, I also picked up some more unpainted snotties to add to the collection below. They will serve several purposes. One is that they can be pressed into servitude in my Skaven army, for more slaves. Second... I've been having thoughts of creating a light-hearted, oldschool "Dungeon" or "Heroquest" type board game, but using figures and (eventually) a modular 3D "board." So these make ideal low level denizens.

I've sent a lot of other stuff off to Cold Wars this weekend, for sale at the club flea market table. I'm having to thin the collection out to help cover bills. I do have one or two items someone is picking up for me from the dealers room. Although I'd like a pile of them, I'm going to have to be happy with one box of the Perry WotR mercenaries -- just so I can see how they look. Once my employment is settled, maybe I can jump back into medievals full tilt. Also, with an eye on finally starting the Macedonians/Successors I've asked for just a couple packs of Molon Labe (ex-Vendel) figures, since they're now easilly available in the US. I've long been curious to check out their size & quality.

Posted by ZeroTwentythree at 9:47 AM