Just a few quick photos to show what's "on deck" in terms of my own figures on my painting table.

First, I'm excited to finally be starting work on my Macedonians/Successors/Diadochi. No, they're not "Silver Shields," but I've just cleaned them up and have them ready to prime. The first group of 24 phalanx. These are Crusader figures. Two more groups of 24 are the same. Then there are two groups of 24+/- Foundry figures. 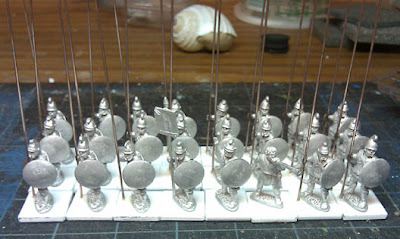 I've also dug up 16 Greek archers from BTD. I think I picked these up from a rare bargain on eBay. Nice figures, though I'd like more variety. These are going to be my next experiment in "dipping" before moving on to the phalanx above. These should see use as Greeks, Cretans and maybe some other regional skirmishy archer types. 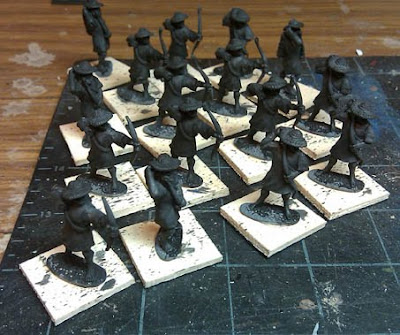 Rounding out the previous unit of Carthaginians and elephant (and all their already painted allies & mercenaries) I've partially painted a couple of command figures. Again, Crusader figures. These are from the cavalry command pack, but I'm going to use them as a general and army standard. 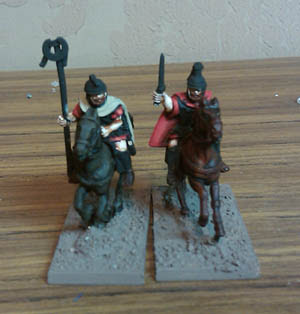 And lastly, some more landsknecht pikemen. These are mostly Foundry, along with a few assorted painted figures in the back. I've also got 20 Artizan figures (though some are command) to clean, prime & base to add to this group. I should end up with somewhere near 36 figures in all. I'm not sure these will be a priority, as I'm anxious to try putting together a Hellenistic campaign at some point. 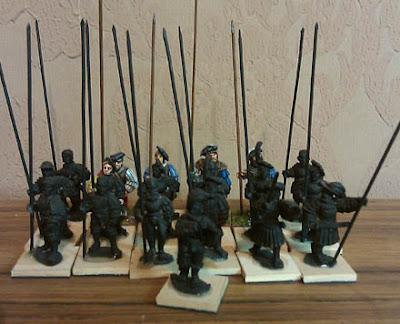 Posted by ZeroTwentythree at 9:50 PM