Painted up my first group of Mantic skeletons. They are a mix of the regular ones and the Revenants, which I thought look too similar to the regular skeletons to warrant use as some other troop type.

They are OK models for the price. I'm not a huge fan of Mantic's figures in general. But I was more optimistic with the undead after seeing photos online. Once I got them in person, and now after I painted them I am less impressed. Some of the detail is very shallow and just doesn't show up with the paint. Some of the poses are a bit awkward (a few of them reminded me of the Warlord Celts,) including the way some of them were holding their weapons. I'm not really a fan of the "expressive" (cartoon-y?) skulls, either. They're not horrible figures. And they might look better in mass numbers. I'm just not a huge fan so far.

They're also a lot smaller than I expected. They look OK next to the ancient Germans I'm using as "undeadish" and should scale up OK with Perry WotR figures that will end up on the opposite side of the battlefield. But they really look miniscule next to GW and other fantasy figures. This wasn't entirely unexpected, but the difference is more noticeable than I had thought it would be. (At least on the painting/photo table -- I'll have to see how they look on the gaming table.) 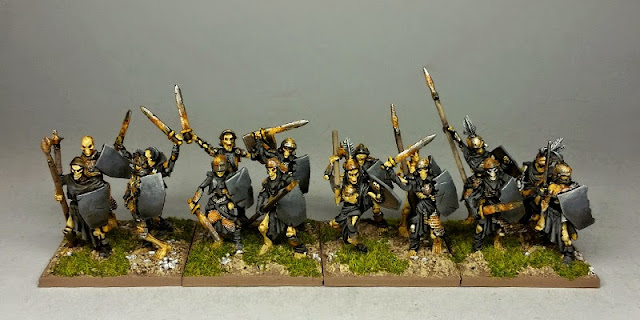 Posted by ZeroTwentythree at 1:34 AM