I just discovered this in a box in the attic while digging around for other (non gaming) stuff. Brought up a bit of nostalgia for me. GW made an (apparently rare) appearance at Origins (year 2000?) soon after 6th ed. came out, and ran a small tournament. We were all using the Ravening Hordes lists. Coincidentally I was playing an all Nurgle daemon army. They handed out random little buttons to everyone, I got this one. 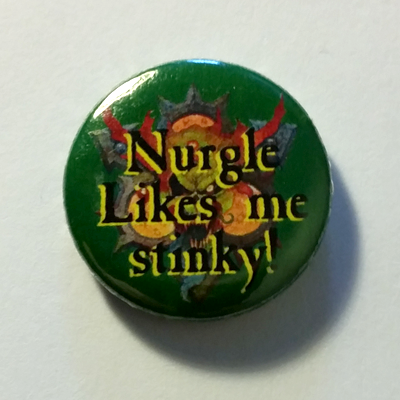 I also won a very large scale resin Empire great cannon, which is unfortunately in a bag, broken in pieces at this time. I am thinking about turning it into a crumbled-statue terrain piece.

Posted by ZeroTwentythree at 11:48 PM