I did, in fact, get to hang out with some old friends and play a coupe of games of Kings of War today! I didn't think about taking pics for the inevitable blog post until after the second game had started. So that's what ye get.

We played 1500 points, which seems like a decent size for a casual game. This time I took my Marienburg army and went with a bunch of regiments instead of all of the hordes I took with the undead last time.

First game was against orcs. I learned about their good ME score, and crushing strength. I lost (technically a draw based on the scenario, but I had almost no army left to theoretically contest the loot left unclaimed,) but did better than I thought I would after the early game seemed to go downhill for me. As much as the orcs were tough to deal with, I think the flyer (a chimera) was what really screwed me up. I just didn't deal with it very well. My cannon and mage never managed to do more than a single wound to it, it kept my knights tied up most of the game, and still managed to cause some decisive casualties at the end.

Second game was against Skaven Ratkin. More hordes. I did much better this time, though I think I owe a lot of that to my dice and my opponents dice. This time it was the Invade scenario. I did take a few pics, below. On the left I hung back and tried to soften the rat ogres and plague monks up with a cannon and mage, while on the right I charged forward, hoping to hurt his weaker troops (mostly warriors and slaves) quickly and decisively. It worked, but took a little longer than I had planned. Things went better than expected on the left. The first turn I put 5 wounds each on the two heavy hitting units, pressuring them to move up as quickly as they could while I moved back so I could get the charge first. 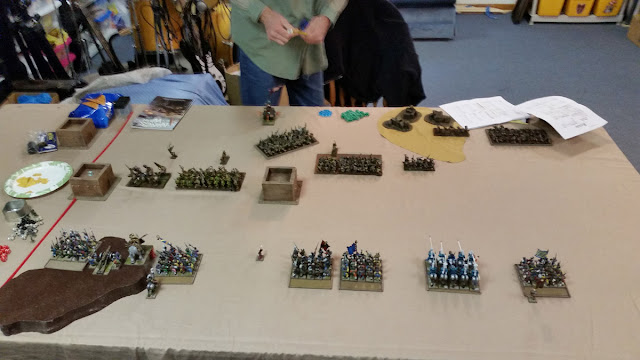 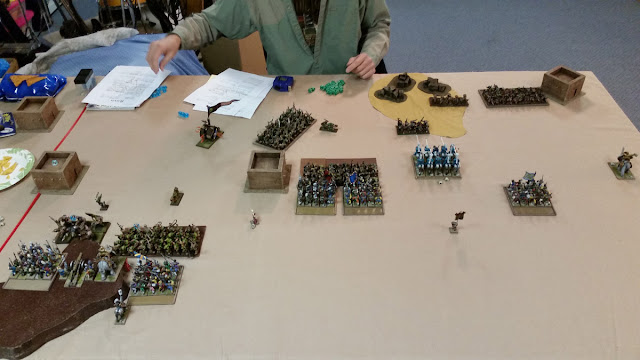 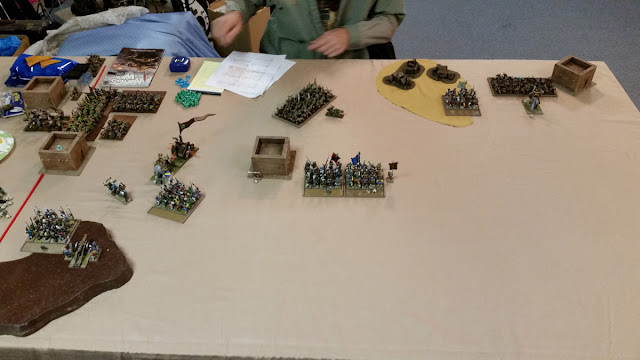 I was once again very pleased with the way Kings of War played. The rules were pretty clear and simple, and the gameplay fast, though everything still felt the way it should, even if some of it is a bit abstracted. Although combats usually seem to be brief, there is also a buildup of casualties that prevents the lack of casualty removal (and full ability to cause damage) from being a problem. I think the game encourages decisive action. I'm once again impressed, and admit (again) that my initial aversion to the rules is unfounded. The simplicity of the rules is misleading. It is a fun and fulfilling game. I'm definitely on board with Kings of War.


Posted by ZeroTwentythree at 10:27 PM