After reading the Sellswords and Spellslingers rules a month or so ago, I decided there were a lot of things I liked about the rules. I was convinced enough that I bought most of the cards online and picked up some MDF to make a 3x3 tabletop, figuring that I would use it for some sort of skirmish gaming anyway.

Since then I haven't been able to get out to the garage to glue some sand, paint, etc. So today I "gave up" on doing a full oldschool table like the old (larger) one that's been hanging in the rafters for the past few years. The weather was nice, so I spent a quick 10 minutes spray painting a piece of MDF, hoping it will look convincing enough to work with the rest of my terrain. I'm still hoping I can find some time in the next few years to spend a little time gluing sand and then painting it, like I had originally planned. 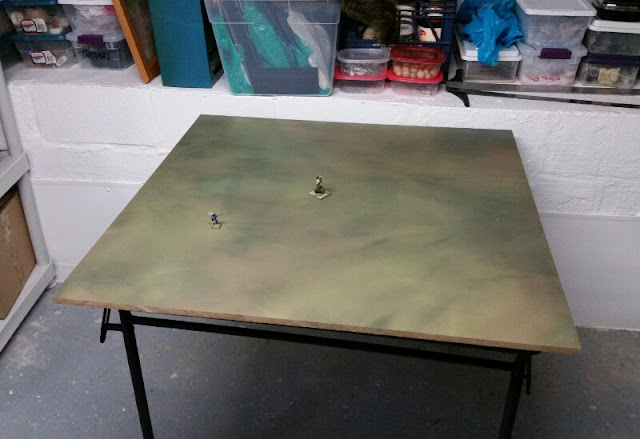 So... here's the half-assed table in basement where I paint. I put my usual scale-reference handgunner on the table, as well as on of the converted Fomorians. I managed to clear some space near a light, and mostly away from the beams that I usually crack my skull on.

I've got two ideas for starting warbands, and I think I've decided which to try first... 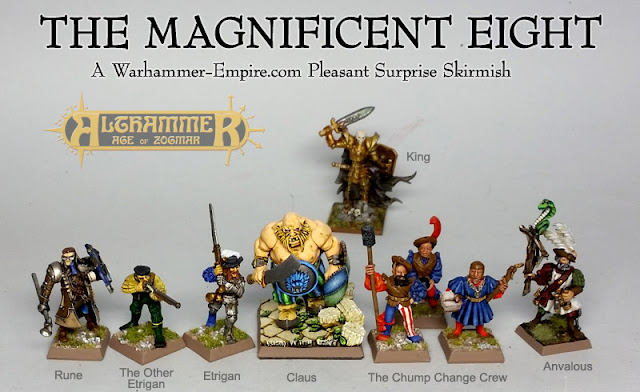 ...It won't be all of them. And there will be a more recent entry. These are from the Warhammer-Empire "Pleasant Surprises" miniatures exchange, and I had started thinking about making use of them in some sort of skirmish game a couple years ago. The essential premise will be this:

Rune, Etrigan (just the zweihander), Claus, all three crew members of the Chump Change Artillery Corps, Anvalous, and the (not pictured, and still to-be painted) Artoban's Ghost have been stranded behind enemy lines. Fighting off whatever come their way, while trying to reunite with the rest of the army. The undead King may show up as a villian.

Hopefully I will finally play the game soon....