I'm a veteran of quite a few RTTs, but this was the first GT I've been to. I believe attendance was 48 (a couple last minute cancellations.) The venue was the theatre at Ohio Wesleyan College, with the tables all being set up on stage. The tables & terrain were nicely done, but simple & generally ideal for the tournament. The scenarios were all interesting and gave some objectives & conditions besides a vanilla pitched battle, but without screwing anyone over or drastically altering balance/gameplay. I thought everything was done very well.

Not my ideal, but it was what I could get painted in time. The twin rockets were a new thing. I had mixed experiences in my few games using a single battery and thought I would give this a go, especially since there was no DoW allowed and I wasn't interested in any of the other Rare choices.

Game One: vs. Orcs & Goblins

I'd played Grumgor before, about a year ago at a RTT and totally had my Skaven head handed to me on a platter. I was hoping for something a little better. His army is a straight forward O&G horde. I forgot to start taking pics until several turns into the game.


The scenario was hidden deployment, we set up secretly behind a screen dividing the two halves of the table. We ended up focusing on opposite corners of the table. He said afterward that he thought I would park on the hill. My thinking was that I wanted the large open area to my right to deploy in a solid line with anchoring terrain. On the left I put some artillery, one unit of knights, pistoliers and one unit of handgunners to delay the enemy. My pistoliers and one rocket launcher had already been overrun by his squigs by this point.

O&G were set up heavy on that side, in the fist pic there's Orcs, wolves, a pair of chariots, the giant on the hill fighting my knights, a troll & some gobbos, more orcs, then two more units of gobbos. Not on the table are one bolt shooter on the hill and a unit of orcs that started somewhere between where my knights and his last unit of gobbos are. They got nailed with a lucky rocket shot on turn one, panicked and ran of the battlefield without a chance to do anything. (I had the first turn.) 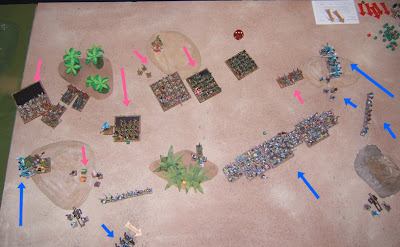 Onward... My left flank is collapsing, the handgunners & grape-shot from the cannon did manage to inflict some casualties on the squigs, though. The giant beat the knights to a pile of scrap, assisten by a last minute charge from a chariot. On the right I slowly swing in, but his wolf riders managed to slide through and hit my handgunners. 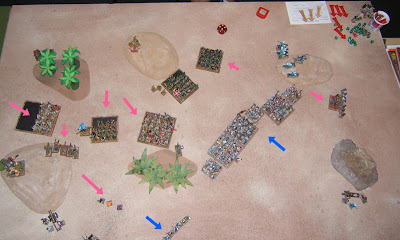 These last two shots show the disasterous end... O&G mop up on my left flank. A horrible mis-estimation on my part ends up with my spearmen fleeing & being destroyed by a lone wolf riding goblin hero, without having taken a sinle casualty. My knights + warrior priest got bogged down in combat with the luckiest night goblins ever, who made two break tests on rolls of 3, then gained the support of a second unit plus a chariot. Even the goblin bolter crew charged into a full block of swordsmen... alone... and survived and didn't flee. 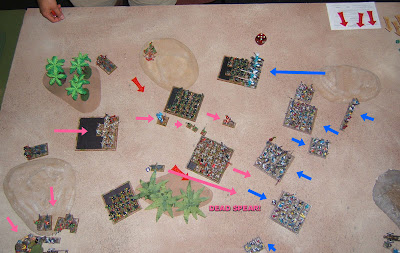 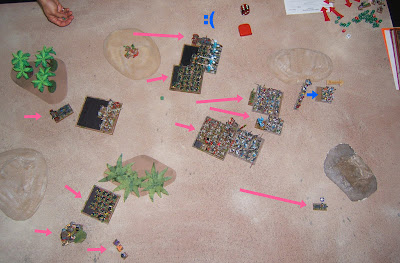 It was a bad start to the day. O&G totally overran Marienburg.


I was feeling a bit down after my first beating, mostly due to stupid mistakes I made. I blame it on the early hour and lack of coffee. So I was looking to redeem myself in game 2.

The scenario allowed each player to choose an advantage for their army from a list. My opponent essentially got +1 armour save for all his spearelves. I got an 18" range for my general's leadership rather than the normal 12", plus I got to redeploy one unit after regular deployment was done. Originally I placed the knights that ended up on the left, in a "reserve" spot behind the center of the line, then shifted them to the left flank. (I deployed the handguners about 2" back, so the knights could go in front.)

Opening shot in the first photo... I move forward and have an amazing first round rocket shot right on one of the spearelf units (with mage) and send them panicking. They stopped just short of the table edge. 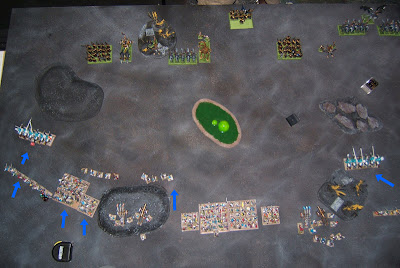 A couple turns in, the elves move up, I hold back in the center, but move my flanks in. I gambleds on a frontal charge to some spearelves on the right. Off the right side of the screen, the pistoliers moved forward, but look to be in a bad spot, facing two units of dark riders and a manticore, with only 10 handgunners backing them up.

I land another rocket on top of the spearelves on the hill, plus unload some handgunners into them. The knights who were originally going for a flanking manuver on them move up for a frontal charge now that they've been decimated anyway. 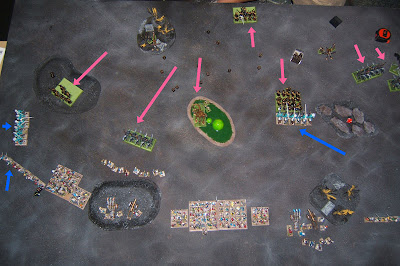 My knights on the right completely miss and lose combat, sending the rocket crew on the right fleeing as well. The dark riders and manticore advance agressively.

The spearelves on the right pursue into my artillery, but I turn my swordsmen to hit their flank. 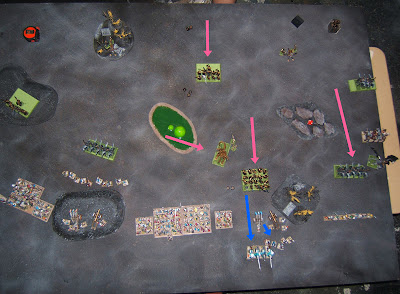 My knights flee of the board from a manticore charge. Spearmen and their detachment charge the hydra, break it and destroy it in pursuit, then hit the spearelves who have finally made it back to the center of the battlefield. The greatswords on the left chase off the dark riders.

Game over, this time with a win for the good guys. 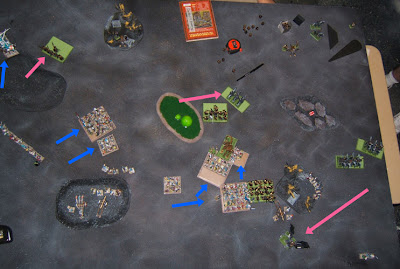 
Posted by ZeroTwentythree at 10:11 AM