Game 3 was against one of my fellow Team B.R.E.W.s. members. Actually, I think he's been a member of half the clubs represented at the GT from around the state. But we've turned him to the, uh, B.R.E.W.S. side. Or something. I've played him before at the local club, so knew roughly what to expect: a challenging battle. Fortunately he's also a fair & balanced player, and all-around nice guy.

From left to right he had tomb prince and chariots, bone giant, fast cav, carrion (behind cav), tomb guards with caster & BSB, ushabti, and archers.

The scenario replaced the normal table quarters with diagonal ones. My objective was to get into the upper left corner of the table (in the photo) with at least US10 and one command figure, his was to do the same to the lower right corner. I didn't forsee either of us having an easy time of it.

Opening moves, the chariots take the gap on my left flank from the pistoliers I've moved there. Again, my wings advance, handgunners step down in front of the hill. Once again I manage to land an early rocket shot, wiping his tomb guard down to 2 figures, plus a wound on one of the heroes. By his turn, he's already managed to bring himself back to better than half strength, though. 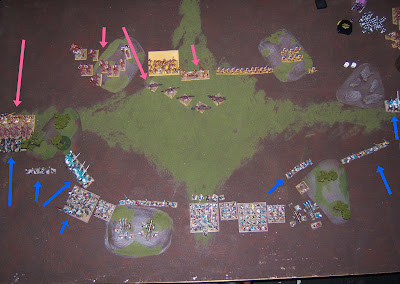 The chariots head back around the woods as my knights manuver to wait for them. The bone giant hides like a big bone, uh, sissy. The knights on the right continue their long flank march, and his archers pull in some ranks to hide behind the hill. The carrion charge my handgunners in what could be the end of my hilltop artillery. The artillery on the right near the woods gets a momentary reprieve from the potential eruption of tomb swarms, who pop up on the other side of the archers.

Things get slightly wierd after this. 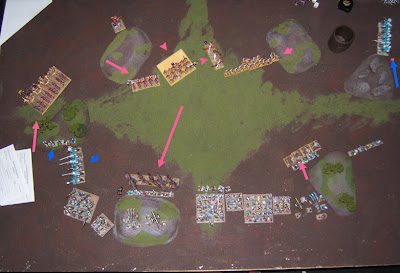 After failing to cause a wound, the carrion are smashed to pieces by the handgunners, who cause more casualties in a single round of hand to hand than all my handgunner do by shooting the entire weekend. The balance to this is that the tomb swarms overrun the archers, panic the cannon crew, and charge the rocket crew. My other cannon misses the best Ushabti shot I could hope for, and misfires. My knights advance on the right flank, and the greatswords see an opening for the back corner objective... 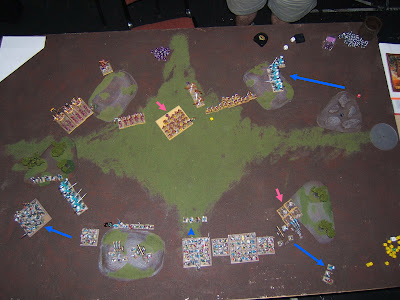 I didn't get an end-game photo, this is as close as it gets.

On the left, the greatswords continue their dash for the objective. The bone giant would eventually charge, do some initial damage, but then be brought down in the last turn. His chariots are destroyed, but the mummy escapes (his chariot was sniped out from under him before the chariots charged), runs for the woods, charges the knights, but dies. I manage another great rocket shot, as you can see in the photo, but by the end of the game, the unit was back to better than half strength. After 3+ turns of flank marching, not only do the knights not get a charge, but they are counter-charged by the ushabti (failed to dispell an easy roll on the movement incantation) and wiped out without causing a wound. The fury of the tomb swarms has not abated. They beat a detachment in combat after killing the rocket crew -- the detachment panics and flees through half my army, and the swarms follow up and eat my swordsment for lunch.

In the end, the Marienburgers manage to pull off a win. As freaked as I was by the unholy rampage of the tomb swarms, their casualties, my pistoliers and the knights on the right were about all I lost. In exchange, I got his chariots, two heroes, the giant, the fast cav, plus some points for grabbing territory and a captured standard. Still it was not a huge win, but enough to land me with a 2-1 record for Day 1. 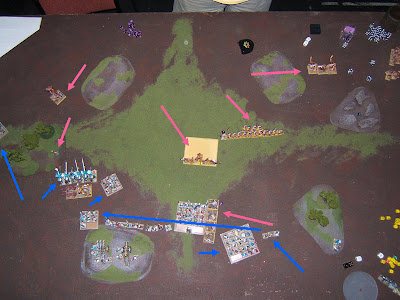 Posted by ZeroTwentythree at 8:33 AM