I was looking for something to do Saturday Night, and came across the painting contest stuff in the event listing. I figured I'd drop off a few figures from the army I'd used in the WAB tournament the day before. I was told the "other" catagory might not have enough entries to run, so I went back to my room and got an almost-but-not-quite-finished Warmachine figure that I'd used in a late night game Friday, so that I might be able to help out the people who had entered keep from missing out.

While asking about the painting contest, I also inquired about the Iron Paintbrush sign on the entry. I'm glad I did, it ented up being one of the highlights of the weekend for me.

I was told it was something like Iron Chef for painting figures. I asked a couple friends to join me (we needed a team of 3) and we met up at the painting pavillion (next to the pool) at 8pm.

After being asigned tables, we went through a process in which randomly determined rules/elements were generated for the competition. What it boiled down to was that each team had an hour and a half to create a diorama from a bag of bits, a small wooden base, and a communal table full of painting & modeling supplies. For this event, the theme was "highwaymen", the base had to include flowers, a circular pattern had to be used somewhere, and we had to feature the color turquoise. Only one person could leave their table at a time. A minimum of 3 figures had to be painted. The bits ended up being from the GW empire militia set. We also needed to have a title.

As we cut, glued, painted, flocked, etc. the judges blasted music, wandered around the room trying to distract the contestants, and called out anyone breaking rules like hording paint, exploiting child labor, or an entire team disappearing to get paint and/or another bottle of wine. (A good number of the teams seemed to be half-lit when the event started...)

So after an hour and a half of brainstorming and fast paced work, we turned in our entry, "Beating Around the Bush." 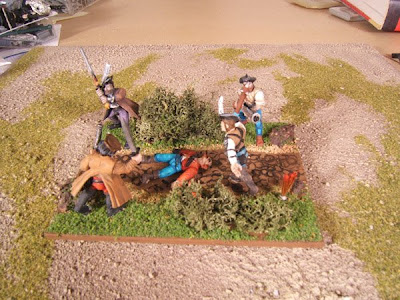 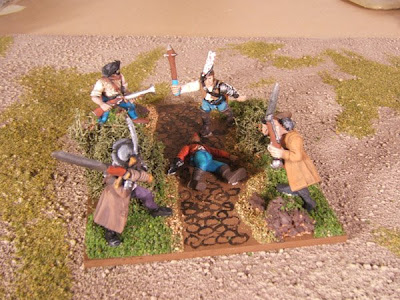 There were 13 teams (I think) and all were good entries. We scored a silver and each took home a bag of loot, mainly modeling supplies (greenstuff, zap-a-gap, cans of armoury primer & clearcoat, and one of those super-no-stick mats.)

In hindsight, my idea about painting the circular pattern cobblestones with only 3 minutes to deadline (and all hobby supplies had to be returned to the shared table) might not have been a good one. I wanted to make sure the pattern was prominent, but it looks a bit messier I would have liked. Whoops.

Posted by ZeroTwentythree at 3:40 PM