The past few weeks I've played a couple of WAB2 games with my Romans... much to my Romans chagrin. The games have been against Seleucids and Early Achaemenid Persians.

Both games played out more or less the same way...

First up Rome vs. Seleucids 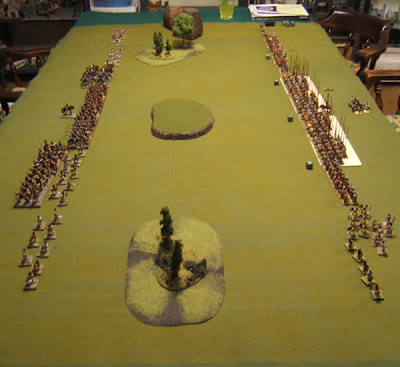 Romans on the left had four regular legions, one unit of Spanish scutarii (auxilia), some Gallic heavy cavalry, and an assortment of skirmishers.

The eastern menace had four phalanx units, four heavy bolt shooters, a catapult, two units of archers, and an assortment of sling and javelin armed skirmishers.

Turn one the catapult snipes my general. From there it went downhill. I got close to engaging in combat (see photo below) but taking some last minute heavy casualties from shooting forced some panic tests, and resulted in the Romans fleeing, leaderless, from the battlefield. I don't think their odds would have been that great in combat anyway, considering their diminished numbers were facing fresh phalanx. 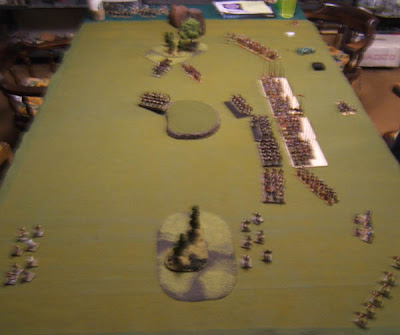 Game two, against the other eastern menace -- the Persians.

I fielded the same Roman army.

The Persians had about four units of Immortals, two units of levy, four bolt shooters, and some skrimishers.

I had wanted to take advantage of the Roman drill to try to fast march, but the bolters were a bit of a deterrent again. As it was, it wouldn't have made much difference by my after-the-fact calculation of the distances. That and I would have been eating six ranks worth of bolt shots instead of 2-3 after the first turn of shooting annihilated the skirmishers. 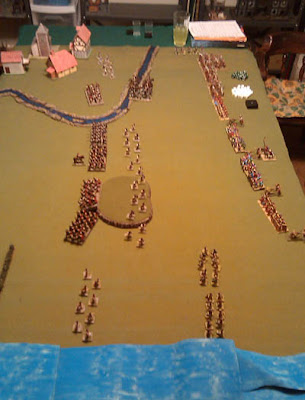 So that would be the pattern. The first turn saw the skirmisher "ablative armour" blasted away. The next few turns whittled down the legions and allies so that only a few lonely Romans actually made it into combat through the hail of arrows and other missiles. And like last game, they had to face fresh troops at a combat advantage (these were behind spara, rather than the phalanx benefit.) 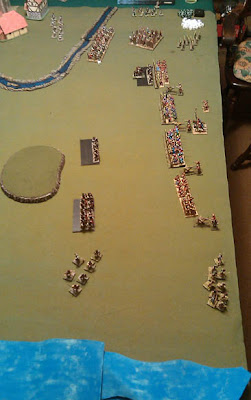 In considering the assorted "stupid roman tricks" I'm not certain how to approach these all-shooting armies. In both cases my infantry units more or less equaled my opponents. So even if I bump up the skirmishers or try some shooting of my own, it will come at the cost of dwindling melee troops. Seems to be six of one, half dozen of the other -- in either case I won't have much that survives to actually get into combat. Maybe taking the raw recruits is the answer... go for cheaper troops?

I want to solve the puzzle with the Romans, but the easiest option seems to just switch back to the Germans & Gauls. ;)

Posted by ZeroTwentythree at 12:05 AM