I've painted the first group of Westfalia halfmen for the Jackrabbit Trading Company (JTC.) These are the crossbowmen. I liked the idea of crossbows because it's a different take on halflings. It seemed to make sense, for some use, to me. Greater draw, range, power than bows or slings. Both of those will still have a place with scouts, rangers, militia, etc. But for the "professional" guard of the JTC, I'm going to use some crossbow troops. 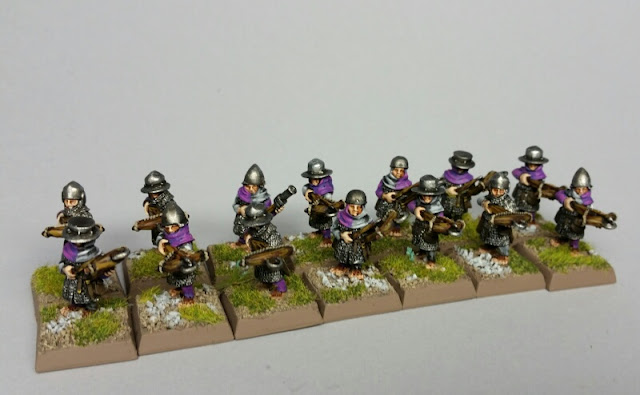 If you look carefully, there is actually one with a handgun. I picked up some miscast figures from Westfalia, with the intention of using them for casualty markers. And I will. But I needed a few more figures for this group, and one of the supposed miscasts was a handgunner that I couldn't find any flaw on. So "Boomstick Bill" the hobbit joined the ranks. Bill's always got to do his own thing.

On that topic, I still wanted one more. So I picked a halberdier from the miscasts, reconstructed his helmet and side of his head (a couple of big bubbles in the casting) and then cut off the halberd and put together a standard. So once this guy is painted, he will join the above unit plus the first sample figure I received from Westfalia, giving me a unit of 16. Or two smaller units of 8. I regret not getting more crossbow hobbits, and if they become  available for general purchase, I would like a second batch. 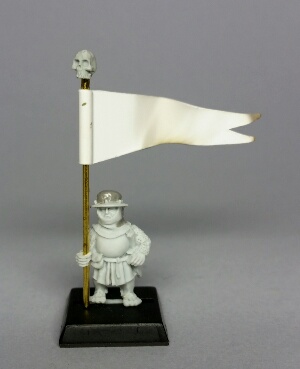 Yesterday I received (another) package in the mail from Shadespyre. A small batch of the later Citadel armoured skeletons, to match the few I painted up in Deadcember. I knew they were on their way, so I also got hold of a sample pack of similar looking former Harlequin skeletons from Black Tree Design to see how they scaled up. In the photo below, there are three Citadel figures on the left, and three Black Tree figures on the right. Pretty close match! 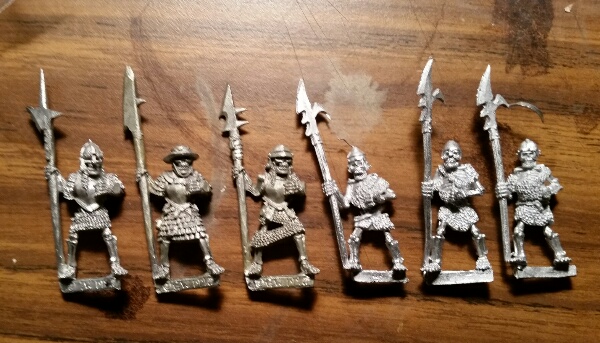 Posted by ZeroTwentythree at 12:53 AM